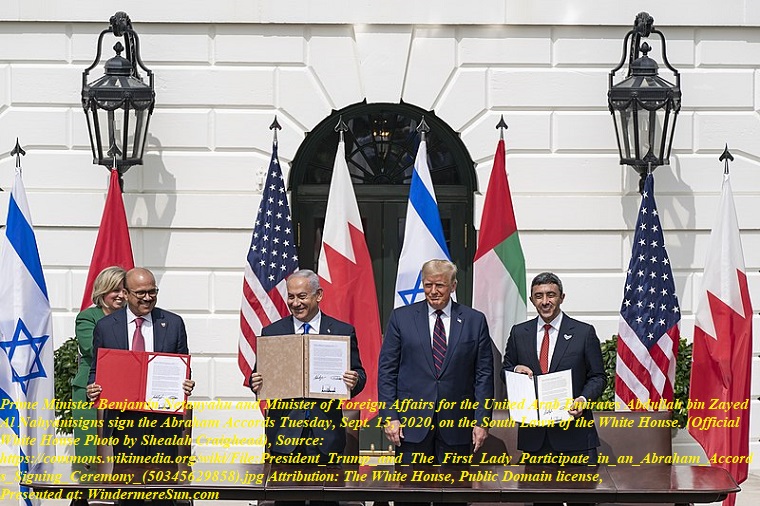 An important peace agreement deserving to be noted, the Abraham Accords, excerpt from wikipedia, in italics, below:

The statement marked the first public normalization of relations between an Arab country and Israel since that of Jordan in 1994. The original Abraham Accords were signed by the Emirati foreign minister Abdullah bin Zayed Al Nahyan, the Bahraini foreign minister Abdullatif bin Rashid Al Zayani, Israeli prime minister Benjamin Netanyahu, and U.S. President Donald Trump on September 15, 2020, at the South Lawn of the White House in Washington, D.C.[3] The accords were negotiated by Trump’s son-in-law and senior advisor Jared Kushner and Kushner’s assistant Avi Berkowitz.[4]

The agreement with the UAE was officially titled the Abraham Accords Peace Agreement: Treaty of Peace, Diplomatic Relations and Full Normalization Between the United Arab Emirates and the State of Israel.[5][6] The agreement between Bahrain and Israel was officially titled the Abraham Accords: Declaration of Peace, Cooperation, and Constructive Diplomatic and Friendly Relations, and was announced by the United States on September 11, 2020.[5]

The accords are named after Abraham to emphasize the shared origin of belief between Judaism and Islam, both of which are Abrahamic religions that strictly espouse the monotheistic worship of the God of Abraham.[7]

It is a deal that the world is talking about. Israel-UAE have agreed to establish diplomatic ties. A peace deal has been brokered by the US. Palki Sharma Upadhyay tells you all that you need to know, in the video published on Aug 14, 2020, “Gravitas: Israel-UAE deal: All about the Abraham Accord“, below:

TBN’s Original series, The Abraham Accords, takes a look inside the groundbreaking peace agreements between Israel and several Arab countries, including the United Arab Emirates, Bahrain, and Morocco, in the video published on Nov 5, 2021, “The Beginning of Peace in the Middle East | The Abraham Accords on TNB“, below:

The talk in the Middle East these days is of “normalization” – between Gulf states and Israel. However, the media push to normalize normalization started before the deals were signed and is likely to go on for a while, in the video published on Sep 19, 2020, “The Abraham Accords: The PR of the ‘peace deals’| The Listening Post“, below:

Nearly one year ago on September 15, 2020, the United States, United Arab Emirates, and Bahrain signed the historic Abraham Accords. With this accomplishment, the United Arab Emirates and Bahrain charted a new course in the history of Arab-Israeli relations by recognizing the State of Israel and normalizing diplomatic relations. Later that year, two other Arab nations, Sudan and Morocco, followed suit and joined the Abraham Accords, raising the number of Arab States with formal diplomatic ties to Israel from two to six. Today, with the new coalition government in Israel led by Prime Minister Naftali Bennett, there are new political realities at play. This discussion will bring together some of the Ambassadors from the Abraham Accords signatory countries for their perspective, one year later. This important diplomatic initiative is key to maintaining and strengthening peace and stability in the region while collaborating on areas of mutual interest. We will also broadcast a special video message of Ambassador Gilad Erdan, Israel’s Ambassador to the US and United Nations, in the video published on Sep 14, 2021, “The Abraham Accords One Year Later: Assessing the Impact and What Lies Ahead“, below: