Beirut Explosion- How Will Beirut Be Rebuilt? 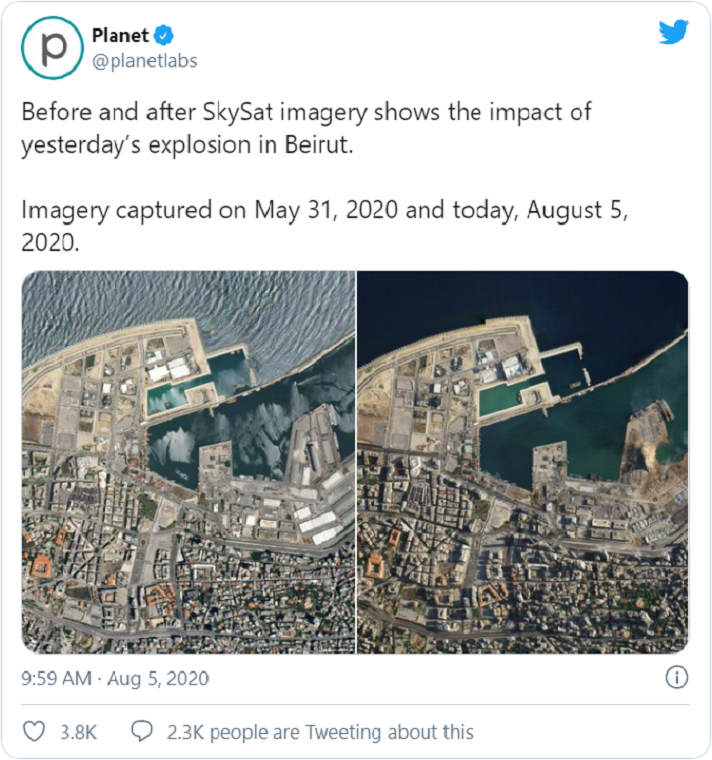 Before and After Beirut explosion devastation spotted from space satellite (Attribution: PlanetLabs, Presented at: WindermereSun.com) 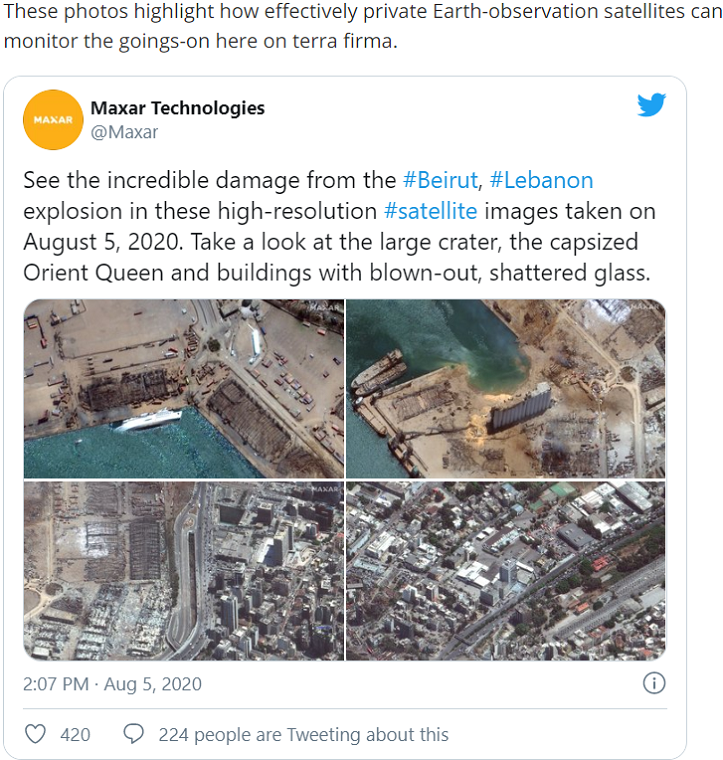 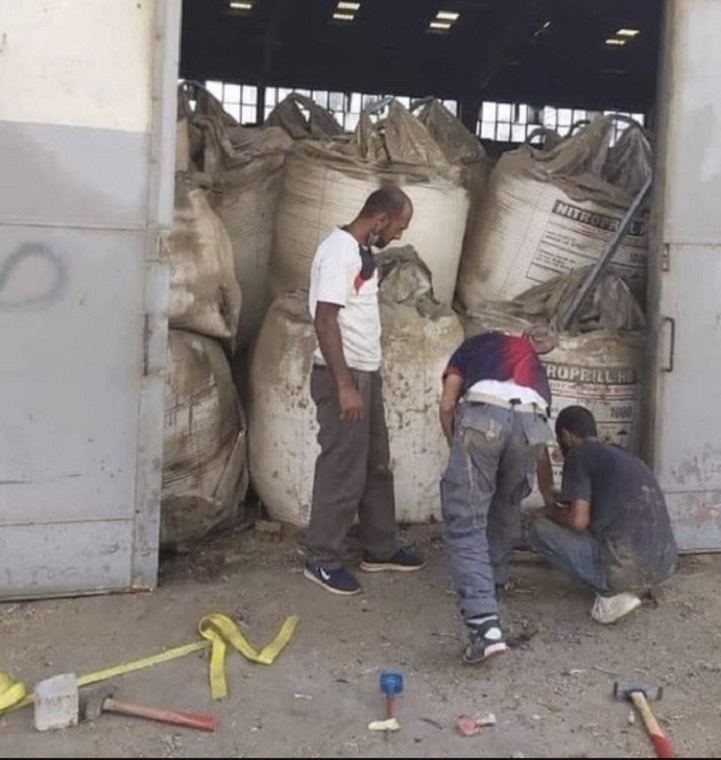 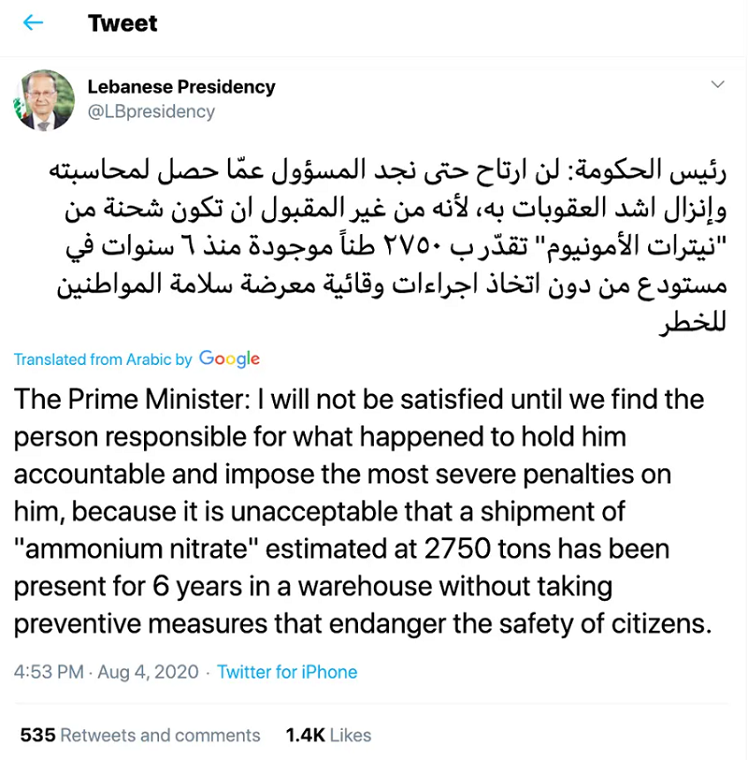 On Tuesday, August 4, 2020, huge explosion has gone off in the capital of Lenbanon, in Beirut, as a result of incorrect storage  2750 tons of ammonium nitrate. According to a U.S. government source who is not authorized to speak publicly but who had military explosives experience, the explosion had the force of at least 500 tons of TNT.  This explosion caused damage over a 6-mile radius and was felt more than 100 miles away. The image of how ammonium nitrate was stored was circulated on internet, below:

The size of the explosion that ripped through the port in the Lebanese capital has shocked the world, in the video “Explained: What happened in deadly Beirut explosion“, below:

“Lebanon deserves better”: that’s one of the main messages coming out of Beirut after Tuesday’s devastating port explosion. The blast killed at least 138 people and destroyed much of the city center. Many are blaming decades of government corruption and mismanagement. Lebanon was already in an economic and political crisis before the disaster. So can the country rise from the destruction? In the video “Will the Beirut explosion lead to political change in Lebanon? Inside Story“, below:

Investigative journalist and founder of the news site Beirut Report, Habib Battah, said Tuesday there is “great fear” in Lebanon after a massive explosion in the capital, in the video “Beirut explosion: Lebanese journalists says city feeling “great fear” after deadly blast“, below:

As a result of this explosion, the tweet from Lebanese government, below:

As the people of Beirut are left to clean up their streets, much remains to be seen as to whether or not there will be political changes in the Lebanese government or how Beirut will be rebuilt.

Ammonium nitrate is a chemical compound commonly used in mining, construction, and other heavy industries as an inexpensive and effective explosive. It is predominantly used in agriculture as a high-nitrogen fertilizer. For more about ammonium nitrate, please refer to excerpt from wikipedia, in italics, below:

Ammonium nitrate is a chemical compound with the chemical formula NH4NO3. It is a white crystalline solid consisting of ions of ammonium and nitrate. It is highly soluble in water and hygroscopic as a solid, although it does not form hydrates. It is predominantly used in agriculture as a high-nitrogen fertilizer.[4] Global production was estimated at 21.6 million tonnes in 2017.

Its other major use is as a component of explosive mixtures used in mining, quarrying, and civil construction. It is the major constituent of ANFO, a popular industrial explosive which accounts for 80% of explosives used in North America; similar formulations have been used in improvised explosive devices.

Many countries are phasing out its use in consumer applications due to concerns over its potential for misuse.[5] Accidental ammonium nitrate explosions have killed thousands of people since the early 20th century.

Ammonium nitrate decomposes, non-explosively, into the gases nitrous oxide and water vapor when heated. However, it can be induced to decompose explosively by detonation.[32] Large stockpiles of the material can also be a major fire risk due to their supporting oxidation, a situation which can easily escalate to detonation. Explosions are not uncommon: relatively minor incidents occur most years, and several large and devastating explosions have also occurred. Examples include the Oppau explosion of 1921 (one of the largest artificial non-nuclear explosions), the Texas City disaster of 1947, the 2015 Tianjin explosions in China, and the 2020 Beirut explosions.[33]

Numerous safety guidelines are available for storing and handling ammonium nitrate. Health and safety data are shown on the safety data sheets available from suppliers and from various governments.[17][18][19]

Pure ammonium nitrate does not burn, but as a strong oxidizer, it supports and accelerates the combustion of organic (and some inorganic) material.[17][20][21] It should not be stored near combustible substances.

While ammonium nitrate is stable at ambient temperature and pressure under many conditions, it may detonate from a strong initiation charge. It should not be stored near high explosives or blasting agents.

Contact with certain substances such as chlorates, mineral acids and metal sulfides, can lead to vigorous or even violent decomposition capable of igniting nearby combustible material or detonating.[23][24]

The potential for use of the material as an explosive has prompted regulatory measures. For example, in Australia, the Dangerous Goods Regulations came into effect in August 2005 to enforce licensing in dealing with such substances.[26] Licenses are granted only to applicants (industry) with appropriate security measures in place to prevent any misuse.[27] Additional uses such as education and research purposes may also be considered, but individual use will not. Employees of those with licenses to deal with the substance are still required to be supervised by authorized personnel and are required to pass a security and national police check before a license may be granted.

Health and safety data are shown on the material safety data sheets, which are available from suppliers and can be found on the internet.[28]

Ammonium nitrate is not hazardous to health and is usually used in fertilizer products.[28][29][30]

Ammonium nitrate has an LD50 of 2217 mg/kg,[31] which for comparison is about two-thirds that of table salt.

In case you’re interested in the Politics of Lebanon, please refer to the excerpt from wikipedia, in italics, below:

Lebanon is a parliamentary democratic republic within the overall framework of confessionalism, a form of consociationalism in which the highest offices are proportionately reserved for representatives from certain religious communities. The constitution grants the people the right to change their government. However, from the mid-1970s until the parliamentary elections in 1992, the Lebanese Civil War (1975–1990) precluded the exercise of political rights.

According to the constitution, direct elections must be held for the parliament every 4 years but after the parliamentary election in 2009[1] another election was not held until 2018. The Parliament, in turn, elects a President every 6 years to a single term. The President is not eligible for re-election. The last presidential election was in 2016. The president and parliament choose the Prime Minister. Political parties may be formed; most are based on sectarian interests. 2008 saw a new twist to Lebanese politics when the Doha Agreement set a new trend where the opposition is allowed a veto power in the Lebanese Council of Ministers and confirmed religious Confessionalism in the distribution of political power. The Economist Intelligence Unit classified Lebanon as a “hybrid regime” in 2016.[2]

For more about the politics of Lebanon, please click HERE.