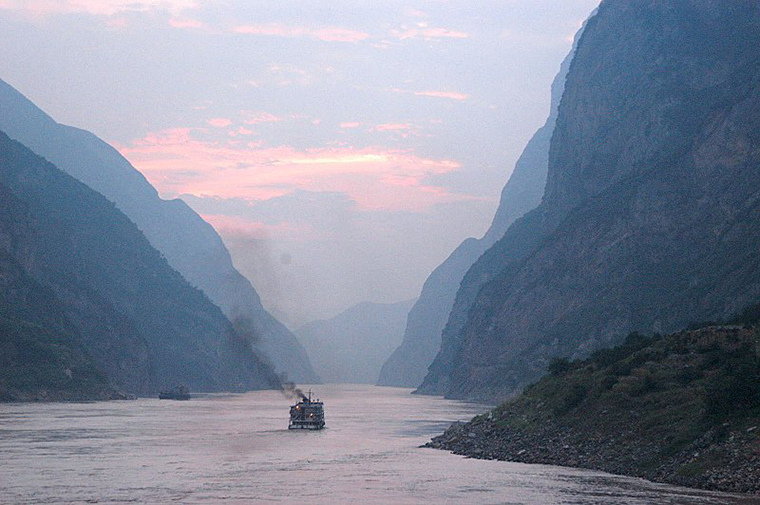 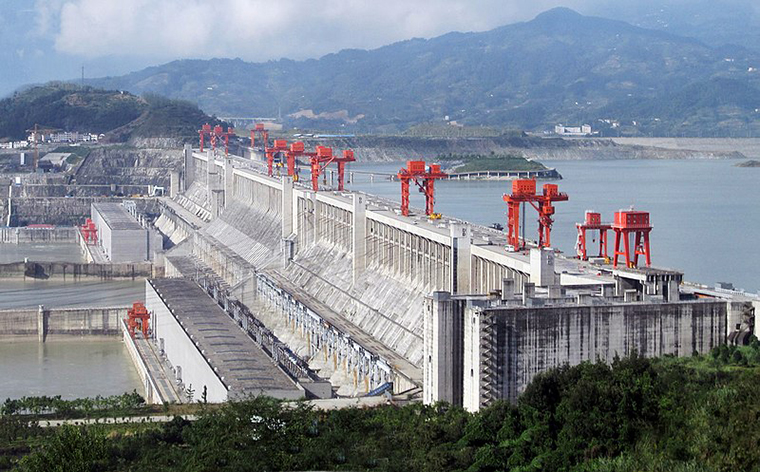 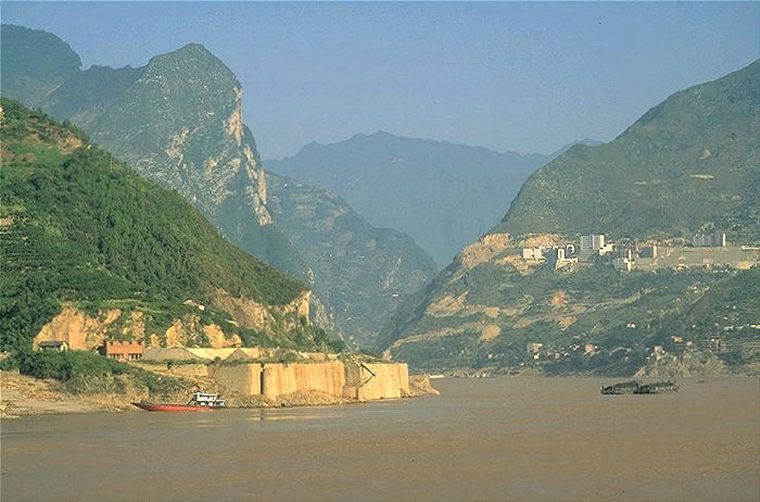 The scenic Three Gorges area flooded by the reservoir, 2005, PD, Presented at: WindermereSun.com.

On Sunday, July 26, 2020, the Chinese media authority Xinhua News Agency announced that the “No.3 Flood” of the year had been declared for the embattled The Three Gorges Dam, located on the Yangtze River. The Three Gorges Dam has “moved, leaked, and distorted.” The dam saw its most severe flooding of the year and the dam’s reservoir recorded an inflow of 50,000 cubic meters per second and it is expected to peak at 60,000 cubic meters per second by Tuesday, July 28, 2020, according to China’s Ministry of Water Resources. China’s National Meteorological Center (NMC) predicts torrential rains in sections of Chongqing, Guizhou, Guangxi, Hubei, Hunan, Jiangxi, Anhui, and Jiangsu. The NMC predicts that these provinces will see 180 mm daily rainfall, with some areas experiencing up to 70 mm of rain per hour. Water levels on Lake Tai, at the border of Jiangsu and Zhejiang, have surpassed safe limits for nine days in a row. According to the Ministry of Water Resources, the middle and lower reaches of the Yangtze River below the city of Shishou have also surpassed the safe limits. Given that the Three Gorges Dam is upstream of Lake Tai and Shishou, the dam has failed to live up to its purpose of flood control. As pouring rain continues to soak central and southern #China, an expert warns that the Three Gorges Dam, one of the world’s largest #dams, is at risk of collapse, in the video “Expert: Three Gorges Dam Could Collapse, NTD“, below:

In the video “Flood No. 3 forms on the Yangtze River; Three Gorges Dam Failure Simulation, China Flood“, below:

More than 400 million Chinese people’s lives downstream would be impacted if the dam collapses.

In the video “Will China change its policy on dams? Inside Story“, below:

The Yangtze River flooded for the first time this year on July 2. At the Three Gorges Dam in Hubei Province, the flood’s inflow rate reached 50,000 cubic meters of water per second. As a result, the dam opened three flood discharging outlets to ease the flood’s impact on the river’s lower reaches. Since June 29, the outflow of the Three Gorges Dam has been controlled at an average daily rate of 35,000 cubic meters per second, reducing up to 30 percent of the Yangtze’s peak discharge, which has effectively relieved the pressure of flood control on the middle and lower reaches of the river, in the video “Three Gorges Dam opens three discharging outlets to ease flood control pressure“, below:

To learn more about The Three Gorges Dam, please refer to the excerpt from wikipedia, in italics, below:

The Three Gorges Dam (Chinese: 长江三峡大坝) is a dam in the Three Gorges region on the Yangtze River in Sandouping, in the country of China. Being one of the largest dams in the world, it also generates the biggest amount of hydroelectric power (22,250 megawatts), pushing the massive Itaipu Dam in Brazil from first place to second place.

The Three Gorges Dam project was completed on July 4, 2012.[1] The dam was built for flood control, irrigation, and electricity. However, this has not come without problems. The dam covers a lot of historic sites and has caused 1.24 million people to lose their homes under the rising water.[2] The dam forms the Three Gorges Reservoir, which extends nearly 410 mi (660 km) upstream to the city of Chongqing.

One of the big reasons the dam was built to control floods. It protects large cities like Wuhan, Nanjing, and Shanghai, which are very close to the river. Lots of farms, small villages and towns, and factories are also located near the river. In the event of a flood, there are 22 cubic kilometers (18 million acre feet) of space behind the dam to hold back the flood waters. The flood waters are stored behind the dam for future use. In the dry season, the water is released down the river, and the reservoir level drops to prepare for the next flood. However, the dam does not protect the lower river tributaries from flooding.

The flood waters are testing ageing dams in China. According to a report, as many as 94,000 dams in China face the risk of a collapse. Such a situation could put millions of lives at risk, in the video “Gravitas: China’s dams of doom: 94,000 aging dams at risk in China“, below:

In the video “Gravitas: Floods in China: A man-made disaster?“, below:

Maintenance and upgrade of infrastructure such as The Three Gorges Dam may be needed to deal with the severe stress on the dam structure. The question now is whether there is sufficient time to prevent further damage and relocate millions of people in the affected area.

You may also be interested in dams around the world that could fail, in the video “5 Dams That Could Fail Any Second“, below: