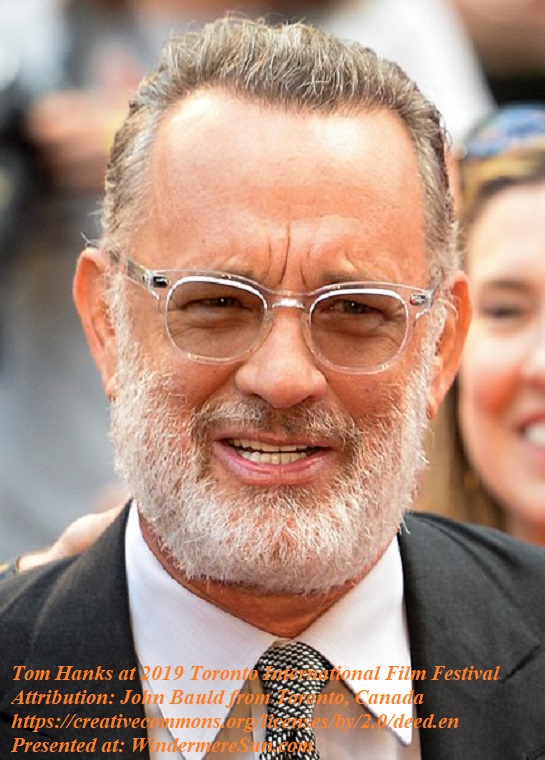 While you’re staying in to avoid COVID-19, do you realize that a World War II (WWII) movie, Greyhound, screenplay by Tom Hanks and starring Tom Hank and Elisabeth Shue, and directed by Aaron Schneider, has just premiered on July 10, 2020 on the Apple TV app: https://tv.apple.com/movie/umc.cmc.o5z5ztufuu3uv8lx7m0jcega?at=1010lGbf&ct=atvp_greyhound_gen_gen&itscg=80101&itsct=atvp_greyhound_gen_gen

The film is based on the 1955 novel The Good Shepherd by C.S. Forester, and also stars Stephen Graham and  Rob Morgan. The plot follows a US Navy Commander on his first war-time assignment in command of a multi-national escort group defending a merchant ship convoy under attack by submarines in early-1942 during the Battle of the Atlantic, only months after the U.S. officially entered World War II. Greyhound was initially scheduled to be theatrically released in the United States on June 12, 2020 by Sony Pictures, but was delayed due to the COVID-19 pandemic. The distribution rights were then sold to Apple TV+, which released the film digitally on July 10, 2020. It received generally positive reviews from critics, who highlighted the effective use of the 90-minute runtime.

The only thing more dangerous than the front lines was the fight to get there.  In the trailer, “GREYHOUND Trailer #2 (2020)Tom Hanks World War II Movie HD“, below:

Tom Hanks, Stephen Graham and Rob Morgan join Hoda and Jenna by video chat to talk about their experience filming the new Apple TV+ film “Greyhound.” Hanks also comments on his experience in quarantine after recovering from the coronavirus, in the video “Tom Hanks And Cast Of ‘Greyhound’ Discuss Upcoming Film, TODAY“, below:

More detailed plot is made available by an excerpt from wikipedia, in italics, below:

During the Second World War, the German Kriegsmarine deploy large numbers of U-boats into the Atlantic to enforce a naval blockade, disrupting convoys of supply ships between North America and Britain. The convoys are organized as groups of a dozen to several dozen freighters, tankers, and troop ships and are assigned naval vessels of various sizes as escorts in case they are attacked at sea. Although the convoy is protected by shore-based military aircraft when sailing near the shore, most of the voyage is in the Mid-Atlantic gap area, known as “the Black Pit” beyond the range of Allied air support, where the only protection for the convoy are the assigned naval escorts. Commander Ernest Krause of the United States Navy is assigned with the Fletcher-class destroyer USS Keeling, codenamed GREYHOUND, along with two British destroyers of the Royal Navy; HMS James, codenamed HARRY, an unnamed destroyer, codenamed EAGLE, and the Canadian Flower-class corvette, HMCS Dodge, codenamed DICKIE, to escort convoy HX-25, consisting of 37 Allied ships headed to Liverpool. The film’s focus alternates between the intense combat between the escorts and U-boats, the Keeling’s daring rescue missions, and Krause’s deep introspections and mood swings, as he grapples with his inexperience in war compared to both his younger British and Canadian colleagues’ experience and his lengthy pre-war naval career, and his devotion to duty which results in his lover insisting they cannot marry until they can be together.

Still three days away from the resumption of air cover, high-frequency direction finding (HUFFDUFF) from the convoy flagship reports German transmissions from a likely U-boat to GREYHOUND. The crew of GREYHOUND identifies the surfaced U-boat heading towards the convoy. GREYHOUND moves away from the convoy to intercept it based on its bearing and gets the U-boat within firing range, but the heavy seas allow the U-boat to dive before GREYHOUND can get a visual. GREYHOUND slows down to sonar speed at arrival. After sonar contact is re-established, Commander Krause maneuvers GREYHOUND above the U-boat and fires a full pattern of depth charges to destroy the U-boat, succeeding in its first kill.

The crew’s jubilation is cut short as they soon receive reports of distress rockets at the rear of the convoy. A Greek merchant ship was attacked and is sinking. Commander Krause moves GREYHOUND to assist the merchant ship and orders the US Navy rescue ship Cadena to attempt a rescue of survivors. While approaching the rear, torpedoes from the U-boat miss GREYHOUND. The crew tracks the torpedos bearing and maneuvers GREYHOUND into a screening position to protect Cadena during the rescue effort.

With the rescue complete, both Cadena and GREYHOUND head back at speed to the convoy. Within minutes, new messages come in one after another from the other escorts: sonar picks up multiple targets approaching slowly: a wolfpack of six U-boats staying just out of firing range of the convoy. Commander Krause correctly concludes that the wolfpack is waiting for nightfall in order to conduct a night attack on the convoy and his destroyers. At nightfall, the attack commences with 5 merchant ships being hit and sunk by the coordinated torpedo launches. One U-boat torpedoes a nearby oil tanker and escapes Krause by using an underwater decoy to avoid depth charges. Although Commander Krause knows there is action to the rear of the convoy, he stops to save survivors in the water.

The next day, the U-boats mount an attack on GREYHOUND itself, now with the lead captain of the U-boats, calling himself Grey Wolf, taunting GREYHOUND and her crew with threats of how he will destroy the convoy and its escorts in continued coordinated attacks. Commander Krause is informed that he is down to six depth charges remaining for the last two days before leaving the Black Pit. The U boat attack involves multiple torpedo runs, and GREYHOUND is barely able to evade the torpedoes deployed against her. Two of GREYHOUND’s companion vessels, DICKIE and EAGLE, are less fortunate and take on damage, with EAGLE eventually sinking and DICKIE taking some hull damage but still seaworthy. With the combined efforts of both GREYHOUND and DICKIE, another one of the U-boats is sunk after it surfaces due to damage and exchanges broadsides and gunfire with the destroyers. GREYHOUND is hit on the port side by the U-boat’s deck gun. Commander Krause and decides to break radio silence by sending out an urgent request for help to the Admiralty.

On the last day in the Black Pit, the remaining U-boats mount an all-out attack as their last chance to destroy the convoy and its escorts. One of the torpedoes glances off the side of GREYHOUND as the destroyer barely manages to evade the other. After heavy fighting, GREYHOUND manages to sink the lead U-boat. To everyone’s relief, they spot air support deployed from British RAF Coastal Command. With spotting assistance from GREYHOUND, a PBY Catalina bomber lines up the last surviving U-boat with depth charges, sinking her instantly.

While assessing damage, Commander Krause receives radio contact from the head of the relief escorts, codenamed DIAMOND, that his relief has arrived and GREYHOUND is due for repair and refitting in Derry alongside his two companion vessels. The crew receives a “job well done” on their four U-boat kills. While setting the new course, the crews of the convoy ships cheer and send up flares to salute GREYHOUND for her valor and victory at sea.