Supreme Court Rules That Half Of Oklahoma Belongs To Native Americans 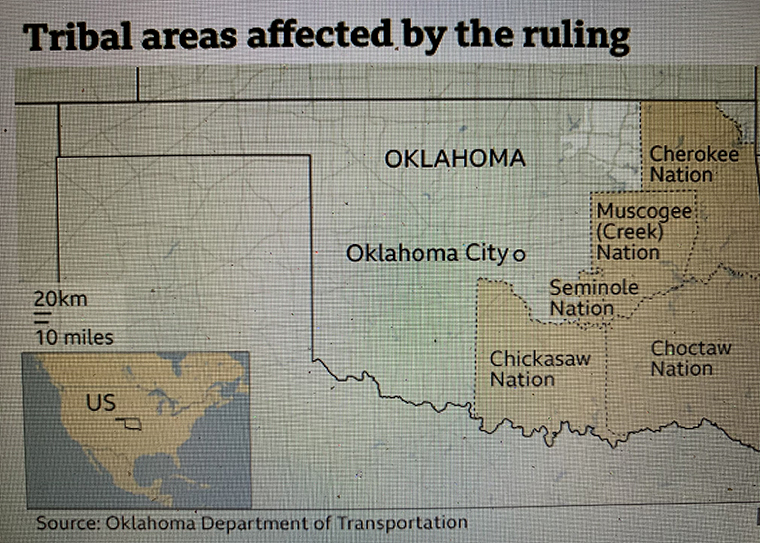 On Thursday, July 9, 2020, the U.S. Supreme Court has ruled that about half of Oklahoma belongs to the Native Americans, in a landmark case (involving Jimmy McGirt, who was convicted of raping a 4 year-old child in 1997, in McGirt v. Oklahoma) that also voided a child rape conviction. The ruling may have overturned McGirt’s prison sentence, but McGirt could still be tried in federal court. The justices decided 5-4 that an eastern chunk of the state of Oklahoma, including its second-biggest city, Tulsa, should now be recognized as part of an Indian reservation. This decision is based on the historical claim of the Muscogee (Creek) Nation to the land where the assault took place.

McGirt did not dispute his guilt before the Supreme Court, but argued that only federal authorities should have been entitled to prosecute him. McGirt is a member of the Seminole Nation. His lawyer Ian Heath Gershengorn said, “The Supreme Court reaffirmed today that when the United States makes promises, the courts will keep those promises.”

This ruling means that some tribe members who were found guilty in state courts for offenses committed on the land at issue can now challenge their convictions. It also means that only federal prosecutors will have the power to criminally prosecute Native Americans accused of crimes in the area.  There are 1.8 million people, of which about 15% are Native Americans, living in this area, spanning three million acres.

In a landmark decision, the Supreme Court has ruled that much of eastern Oklahoma, constituting nearly half the state, is Native American land, recognizing a 19th century U.S. treaty with the Muscogee (Creek) Nation. Justice Neil Gorsuch, a Trump nominee, joined the court’s liberal wing in a narrow 5-4 ruling that found state authorities cannot criminally prosecute Indigenous peoples under state or local laws. The court’s bombshell decision — which also impacts the Cherokee, Chickasaw, Choctaw and Seminole Nations — is a major victory for Indigenous sovereignty and treaty rights. “It’s a landmark case, and probably the most important Indian law case in the last half a century to come down from the court,” says lawyer Sarah Deer, a citizen of the Muscogee (Creek) Nation of Oklahoma and a professor at the University of Kansas. “The language of the decision itself goes far beyond Oklahoma.” in the video “Most Important Indian Law Case in Half a Century”: Supreme Court Upholds Tribal Sovereignty in OK“, below:

Decision overturns a tribe member’s rape conviction because the location where the crime was committed should have been considered outside the reach of state criminal law, in the video “US Supreme CourtDeems Half ofOklahomaa Native AmericanReservation“, below:

Justice Neil Gorsuch, the conservative justice appointed by President Donald Trump, sided with the court’s four liberals and who also wrote the opinion. He referred to the Trail of Tears, the forcible 19th century relocation of Native Americans, including the Creek Nation, to Oklahoma. The US government said at the time that the new land would belong to the tribes in perpetuity.

Justice Gorsuch wrote, “Today we are asked whether the land these treaties promised remains an Indian reservation for purpose of federal criminal law…Because Congress has not said otherwise, we hold the government to its word.”

The dissenting opinion comes from Chief Justice John Roberts who said the decision would destabilize the state’s courts. He wrote, “The State’s ability to prosecute serious crimes will be hobbled and decades of past convictions could well be thrown out…The decision today creates significant uncertainty for the State’s continuing authority over any area that touches Indian affairs, ranging from zoning and taxation to family and environmental law.”

The U.S. Supreme Court ruled Thursday that the Muscogee (Creek) Nation’s reservation was not officially terminated at Oklahoma statehood, as justices issued a decision that may upend state jurisdiction in much of the former Indian Territory, in the video “Supreme Court rules against Oklahoma in Creek Nation case“, below:

According to an analysis by The Atlantic magazine of Oklahoma Department of Corrections records,  1,887 Native Americans were in prison as of the end of last year for offenses committed within the boundaries of the tribal territory.But fewer than one in ten of these cases would qualify for a new federal trial, according to the research.

A former Chief Justice of the Muscogee Nation’s Supreme Court, Jonodev Chaudhuri, dismissed the talk of legal mayhem, and told the Tulsa World newspaper, “All the sky-is-falling narratives were dubious at best. This would only apply to a small subset of Native Americans committing crimes within the boundaries.”

In a joint statement, the Five Tribes of Oklahoma: the Cherokee, Chickasaw, Choctaw, and Seminole and Muscogee Nation, welcomed the ruling. They pledged to work with federal and state authorities to agree shared jurisdiction over the land, “The Nations and the state are committed to implementing a framework of shared jurisdiction that will preserve sovereign interests and rights to self-government while affirming jurisdictional understandings, procedures, laws and regulations that support public safety, our economy and private property rights.”

Much remains to be seen. Besides its impact on the legal system, this new Supreme Court decision will lead to its impact on taxation, education, real estate, culture, environment and much much more for this Eastern portion of Oklahoma, because it is now under the jurisdiction of certain Native American tribes. Whether or not residents of this part of the Oklahoma will have dual residency/citizenship or  whether the non-American Indians will be able to stay remains to be discussed .

What is needed is free flow and exchange of ideas from people within Indian Nations, inside the state of Oklahoma, and elsewhere of United States. This transitional period is expected to need much thoughtful considerations, free discussions, and careful planning.