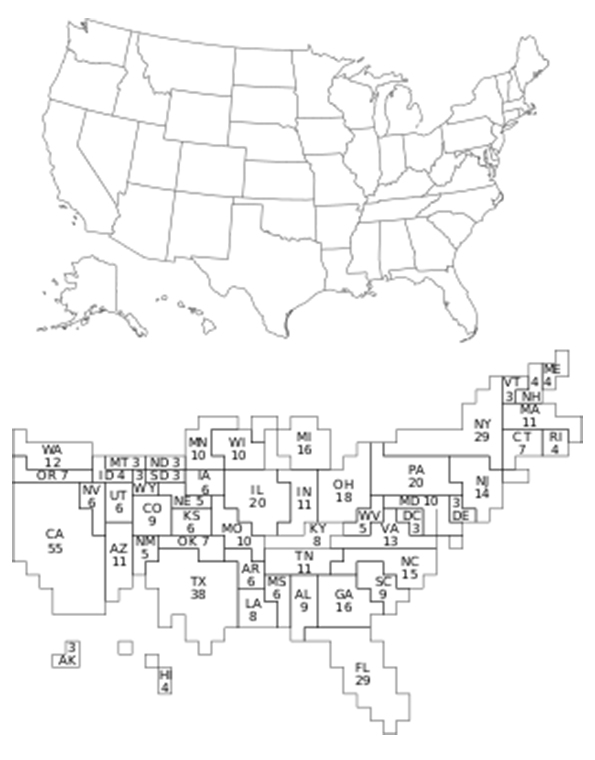 The National Popular Vote bill would guarantee the Presidency to the candidate who receives the most popular votes across all 50 states and the District of Columbia. Explanation. It has been enacted into law in 16 jurisdictions with 196 electoral votes (CA, CO, CT, DC, DE, HI, IL, MA, MD, NJ, NM, NY, OR, RI, VT, WA). The bill will go into effect when enacted by states with an additional 74 electoral votes. See map.  We authored the National Popular Vote bill, and are the non-partisan, non-profit group that employs national and local representatives, on a year-round basis, to meet with state legislators, officials, voters, organizations, and the media in order to pass the bill.

In the video “Introduction: What It Is – Why It’s Needed“, below:

The National Popular Vote Interstate Compact (NPVIC) is an agreement among a group of U.S. states and the District of Columbia to award all their electoral votes to whichever presidential candidate wins the overall popular vote in the 50 states and the District of Columbia. The compact is designed to ensure that the candidate who receives the most votes nationwide is elected president, and it would come into effect only when it would guarantee that outcome.[3][4] As of March 2020, it has been adopted by fifteen states and the District of Columbia, although it is suspended in Colorado.[2] Together, they have 196 electoral votes counting Colorado, which is 36% of the Electoral College and 73% of the 270 votes needed to give the compact legal force. Certain legal questions, however, may affect implementation of the compact.

Proposed in the form of an interstate compact, the agreement would go into effect among the participating states in the compact only after they collectively represent an absolute majority of votes (currently at least 270) in the Electoral College. In the next presidential election after adoption by the requisite number of states, the participating states would award all of their electoral votes to the candidate with the largest national popular vote total across the 50 states and the District of Columbia. As a result, that candidate would win the presidency by securing a majority of votes in the Electoral College. Until the compact’s conditions are met, all states award electoral votes in their current manner.

The compact would modify the way participating states implement Article II, Section 1, Clause 2 of the U.S. Constitution, which requires each state legislature to define a method to appoint its electors to vote in the Electoral College. The Constitution does not mandate any particular legislative scheme for selecting electors, and instead vests state legislatures with the exclusive power to choose how to allocate their states’ electors (although systems that violate the 14th Amendment, which mandates equal protection of law and prohibits racial discrimination, would be prohibited).[4][5] States have chosen various methods of allocation over the years, with regular changes in the nation’s early decades. Today, all but two states (Maine and Nebraska) award all their electoral votes to the single candidate with the most votes statewide (the so-called “winner-take-all” system). Maine and Nebraska currently award one electoral vote to the winner in each congressional district, and their remaining two electoral votes to the state-wide winner.

The compact mandates a July 20 deadline every presidential election year, six months before Inauguration Day, to determine whether the agreement goes into effect for that particular election. A participating state may withdraw from the compact as long as it is before that deadline. The total number of electoral votes held by the participating states could also change due to congressional re-apportionment via the results of the U.S. Census or the admittance of a 51st state.[6]