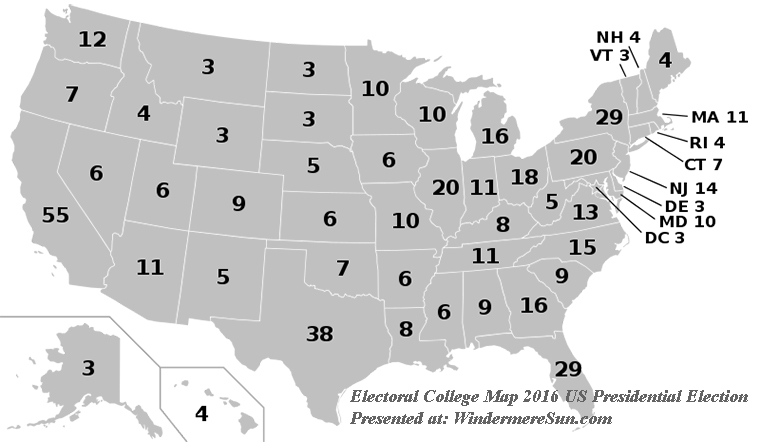 On Monday, July 6, 2020, the Supreme Court unanimously decided that states can require presidential electors (of the Electoral College) to vote for the candidate who won the states’ popular vote. The court examined the votes of electors from 2016 election from Washington and Colorado states and decided that electors would be fined if they were found to be faithless.

The Constitutional Convention in 1787 used the Virginia Plan as the basis for discussions, as the Virginia proposal was the first. The Virginia Plan called for the Congress to elect the president.[14] Delegates from a majority of states agreed to this mode of election. After being debated, however, delegates came to oppose nomination by congress for the reason that it could violate the separation of powers. James Wilson then made motion for electors for the purpose of choosing the president.[15]

Later in the convention, a committee formed to work out various details including the mode of election of the president, including final recommendations for the electors, a group of people apportioned among the states in the same numbers as their representatives in Congress (the formula for which had been resolved in lengthy debates resulting in the Connecticut Compromise and Three-Fifths Compromise), but chosen by each state “in such manner as its Legislature may direct”. Committee member Gouverneur Morris explained the reasons for the change; among others, there were fears of “intrigue” if the president were chosen by a small group of men who met together regularly, as well as concerns for the independence of the president if he were elected by the Congress.[16]

However, once the Electoral College had been decided on, several delegates (Mason, Butler, Morris, Wilson, and Madison) openly recognized its ability to protect the election process from cabal, corruption, intrigue, and faction. Some delegates, including James Wilson and James Madison, preferred popular election of the executive.[17][18] Madison acknowledged that while a popular vote would be ideal, it would be difficult to get consensus on the proposal given the prevalence of slavery in the South:

There was one difficulty however of a serious nature attending an immediate choice by the people. The right of suffrage was much more diffusive in the Northern than the Southern States; and the latter could have no influence in the election on the score of Negroes. The substitution of electors obviated this difficulty and seemed on the whole to be liable to the fewest objections.[19]

Initially, state legislatures chose the electors in many of the states. That practice changed during the early 19th century, as states extended the right to vote to wider segments of the population. By 1832, only South Carolina had not transitioned to popular election. Since 1880, the electors in every state have been chosen based on a popular election held on Election Day.[1] The popular election for electors means the president and vice president are in effect chosen through indirect election by the citizens.[28] Since the mid-19th century when all electors have been popularly chosen, the Electoral College has elected the candidate who received the most popular votes nationwide, except in four elections: 1876, 1888, 2000, and 2016. In 1824, there were six states in which electors were legislatively appointed, rather than popularly elected, so the true national popular vote is uncertain; the electors failed to select a winning candidate, so the matter was decided by the House of Representatives.[29]

The original plan of the Electoral College was based upon several assumptions and anticipations of the Framers of the Constitution:[30]

ABC News’ Devin Dwyer discusses the court’s decision requiring members of the Electoral College to vote in line with state results in presidential elections, in the video “Supreme Court blocks ‘faithless electors’“, below:

The Supreme Court ruled states can bind faithless electors. Fox News chief legal analyst Shannon Bream breaks down what the ruling means, in the video “What does the SCOTUS ruling on faithless  electors mean?“, below:

CBS News legal analyst Kim Wehle joined “Red and Blue” to break down the Supreme Court’s ruling. which allows states to enforce requirements that members of the Electoral College support their party’s presidential nominee, in the video “Supreme Court rules states can punish “faithless electors”“, below:

Now that United States of America has abolished slavery (via 13th Amendment) and given women the right to vote (via 19th Amendment), isn’t it time to retire the two hundred thirty-three year old Electoral College so we can finally reach the IDEAL (of electing our POTUS via popular votes) of our founding fathers such as James Madison and James Wilson?

Besides the route of amending the United States Constitution (which would be a long and arduous process), you may also want to consider joining the effort in National Popular Vote bill, detailed below, in italics:

The National Popular Vote bill would guarantee the Presidency to the candidate who receives the most popular votes across all 50 states and the District of Columbia. Explanation. It has been enacted into law in 16 jurisdictions with 196 electoral votes (CA, CO, CT, DC, DE, HI, IL, MA, MD, NJ, NM, NY, OR, RI, VT, WA). The bill will go into effect when enacted by states with an additional 74 electoral votes. See map.  We authored the National Popular Vote bill, and are the non-partisan, non-profit group that employs national and local representatives, on a year-round basis, to meet with state legislators, officials, voters, organizations, and the media in order to pass the bill.