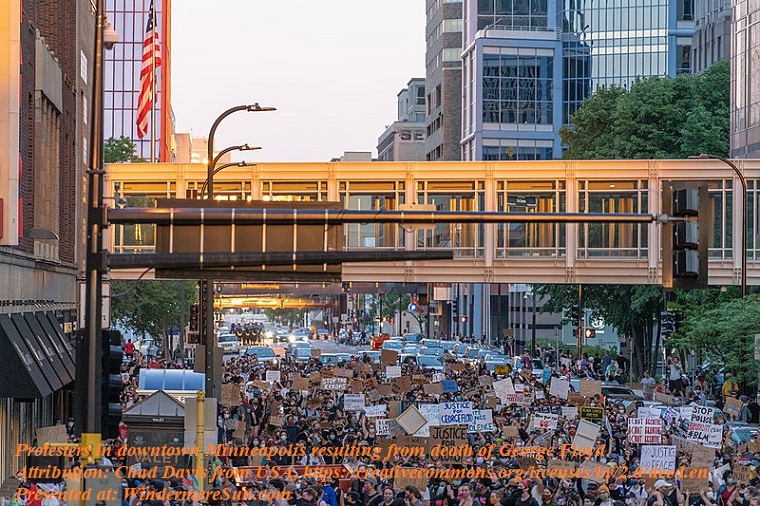 Protesters gather in downtown Minneapolis. Unrest in Minneapolis over the May 25th death of George Floyd., https://creativecommons.org/licenses/by/2.0/deed.en, Presented at: WindermereSun.com) 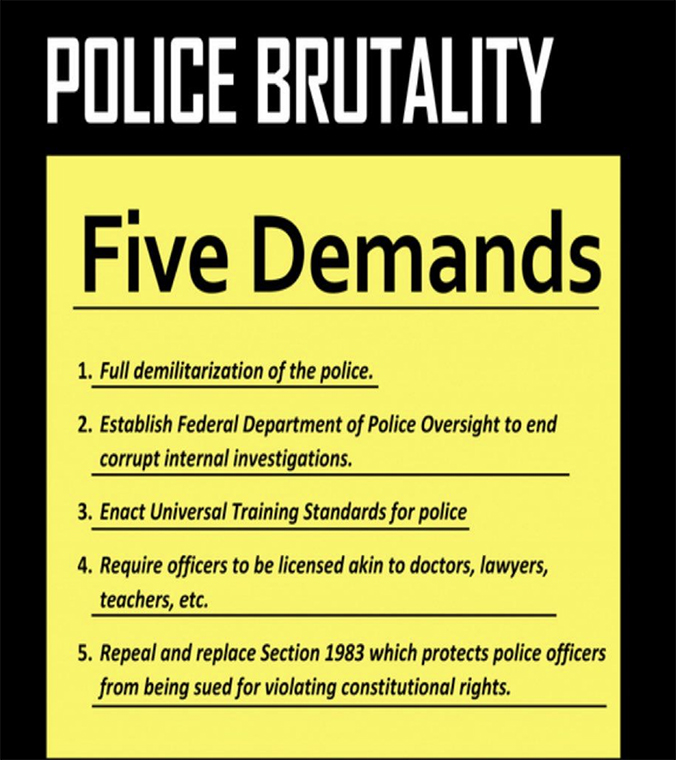 At the request of some of our readers, I found the video footage of 2 Buffalo police pushing down a 75 year old peace activist on Thursday, June 4, 2020, and left him bleeding. The 75 year old peace activist is now in stable condition in the hospital.  Fifty-seven police officers in Buffalo, New York, have resigned from the force’s emergency response team following the suspension without pay and felony assault charge (assault charge of 2nd degree due to more than 10 year difference between perpetrating officers and victim and the fact that the victim is an elderly) of two officers who allegedly pushed a 75-year-old protester to the ground, a source close to the situation said. An investigation is underway in a protest incident Governor Andrew Cuomo called “wholly unjustified and utterly disgraceful.” The man was seriously injured. In the video “Video shows police pushing elderly man to the ground“, below:

The official statement said the 75 year old man tripped and fell, but the video has shown that the 2 Buffalo policemen pushed the 75 year old peace activist. It is true that being a police officer is not an easy job and most policemen are decent, compassionate, and uphold the law, but the video above and below demonstrated that the police training is to stifle the human instinct to help and few bad apples really do spoil the barrel.  Chris Hayes on video of Buffalo police pushing elderly protester: “In just those 15 seconds, that scene is an entire syllabus on how the culture of policing is broken. What has happened to it, and how it operates, and how it has essentially created a whole that is worse than the sum of its parts.” in the video “‘Deeply Broken'” Chris Hayes ON What Buffalo PD Video Shows About Culture Of Police, ALl In, MSNBC“, below:

Two Buffalo police officers were arraigned on Saturday on felony assault charges after a viral video showed them shoving an elderly protestor who remains critically injured after a march against racism, in the video “Buffalo officers charged with felony in protestor shove“, below:

Neal Katyal , in the video above, asks the question needing to be asked: why does Trump’s rights trump every one else’s (or all other Americans’) rights? Why do American citizens walking peacefully on the street outside of White House get tear gassed while Trump gets a photo-op?

This week, as the POTUS loses the support of military as well as the religious leaders, new ring of fencing is now up around the White House, with concrete base. Truly, a POTUS who is good in building walls is not likely to be good in uniting the American people.

It is time for an effective POTUS to address the nation, reminding American people that:

It is time for protesters to go home for they have accomplished what they protested for, justice for George Floyd, upgrading the charge for Derek Chauvin and other three officers. It is time to place your positive energy into your communities to improve system of justice, to improve opportunities for people of all racial groups, and to make sure fair and just people with integrity will be voted into your community and state offices so the 5 Demands presented by these protesters, listed below, will be able to become reality:

*Keep in mind that we are still living in time of COVID-19 pandemic, so please remember to practice social distancing and frequent and thorough hand-washing.

Do not give reason to become arrested. Do Not Be Harmed. Do not give POTUS reason to send in federal troops into your communities. If there will no longer be any protesters roaming the streets, curfews and military troops will no longer be needed. If there will be no protesters while curfews and federal troops are still present, then legal measures may be taken and addressed as in the video “ACLU Sues Los Angeles City, County And San Bernardino Over Curfew Orders“: The ACLU Foundation of Southern California Wednesday filed an emergency lawsuit on behalf of Black Lives Matter Los Angeles, journalists, protesters and others impacted by curfews imposed throughout the region after widespread protests against police brutality in the wake of George Floyd’s death at the hands of Minneapolis police. Katie Johnston reports. below:

George Floyd did not die in vain. The 5 demands against police brutality from protesters are long overdue. It is time to implement these changes.