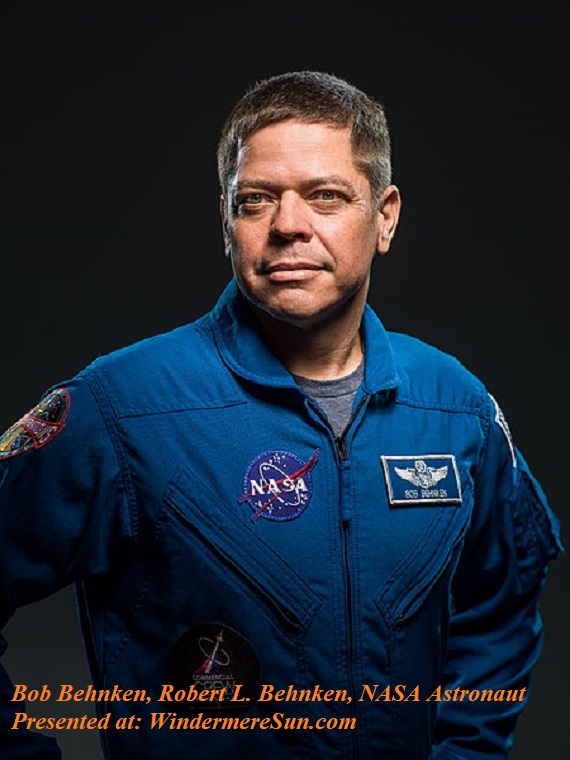 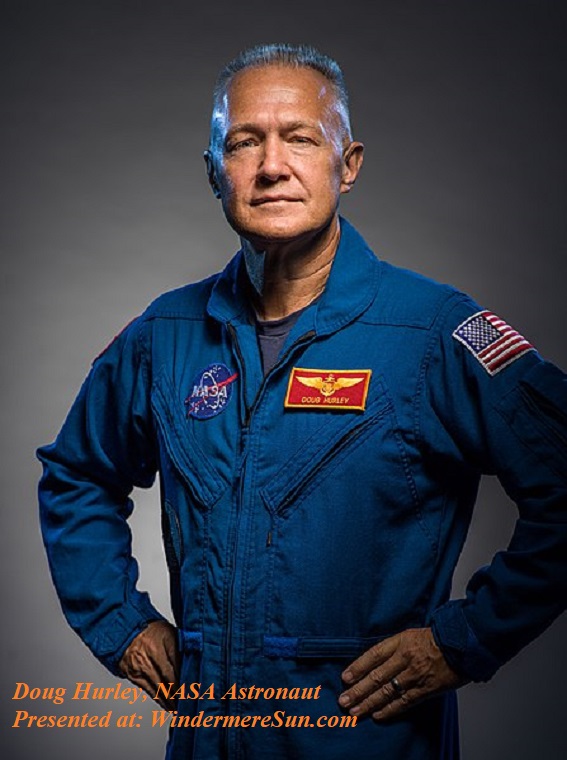 NASA astronauts Douglas Hurley (left) and Robert Behnken (right) participate in a dress rehearsal for launch at the agency’s Kennedy Space Center in Florida on May 23, 2020, ahead of NASA’s SpaceX Demo-2 mission to the International Space Station. Demo-2 will serve as an end-to-end flight test of SpaceX’s crew transportation system, providing valuable data toward NASA certifying the system for regular, crewed missions to the orbiting laboratory under the agency’s Commercial Crew Program. The launch is now scheduled for 3:22 p.m. EDT Saturday, May 30.
(Credits: NASA/Kim Shiflett, PResented at: WindermereSun.com)

On Saturday, March 30, 2020, SpaceX’s Falcon 9 launched Crew Dragon’s second demonstration (Demo-2) mission from Launch Complex 39A (LC-39A) at NASA’s Kennedy Space Center in Florida. This test flight with NASA astronauts Bob Behnken and Doug Hurley on board the Dragon spacecraft will return human spaceflight to the United States. SpaceX made historic Crew Dragon Demo 2 flight with 2 NASA astronauts onboard by a second attempt. The first launch attempt was scrubbed due to bad weather conditions. Falcon 9 booster from this historic mission has been recovered on the droneship Of Course I Still Love You based in Atlantic oceanDemo-2 is the final major test for SpaceX’s human spaceflight system to be certified by NASA for operational crew missions to and from the International Space Station.  SpaceX is returning human spaceflight to the United States with one of the safest, most advanced systems ever built, and NASA’s Commercial Crew Program is a turning point for America’s future in space exploration that lays the groundwork for future missions to the Moon, Mars, and beyond.

For more details about this human spaceflight, please visit HERE.

Everyday Astronaut had the opportunity to meet up with SpaceX CEO, Founder and Chief Engineer, Elon Musk as well as NASA Administrator, Jim Bridenstine to get their thoughts on this new era of human spaceflight! In the video “Exclusive interview with Elon Musk and Jim Bridenstine about #DM2, SpaceX’s first crewed launch!“, below:

In the video “Watch SpaceX Live: Second Launch America – Mission To Space from the Kennedy Space Center“, below:

After standing down from launch on Wednesday May 27, SpaceX is now targeting Saturday, May 30 for Falcon 9’s launch of Crew Dragon’s second demonstration (Demo-2) mission from Launch Complex 39A (LC-39A) at NASA’s Kennedy Space Center in Florida. This test flight with NASA astronauts Bob Behnken and Doug Hurley on board the Dragon spacecraft will return human spaceflight to the United States. The instantaneous launch window opens at 3:22 p.m. EDT, or 19:22 UTC, with a backup instantaneous launch opportunity available on Sunday, May 31 at 3:00 p.m. EDT, or 19:00 UTC. Tune in here to watch the launch webcast. Coverage will begin about 4 hours before liftoff. Demo-2 is the final major test for SpaceX’s human spaceflight system to be certified by NASA for operational crew missions to and from the International Space Station. SpaceX is returning human spaceflight to the United States with one of the safest, most advanced systems ever built, and NASA’s Commercial Crew Program is a turning point for America’s future in space exploration that lays the groundwork for future missions to the Moon, Mars, and beyond, in the video “Crew Demo-2“, below:

SpaceX demonstrates Crew Dragon’s ability to safely and reliably carry astronauts to and from the International Space Station, in the video “Crew Dragon Animation“, below:

Nasa and SpaceX are planning to send two US astronauts to the International Space Station from Florida’s Kennedy Space Centre. Robert Behnken and Douglas Hurley are aboard a Crew Dragon capsule made by Elon Musk’s SpaceX, which is due to be carried by the Falcon 9 rocket, in the video “LIVE: Nasa SpaceX launch Crew Dragon spacecraft with astronauts Robert Behnken and Douglas Hurley“, below:

In the video “NASA SpaceX Crew Dragon Launch“, below:

Elon Musk almost crying speaking at SpaceX Crew Dragon Demo-2 post-launch Press Conference right after successful mission on May 30, 2020. Elon is extremely emotinal. SpaceX made historic Crew Dragon Demo 2 flight with 2 NASA astronauts onboard by a second attempt. The first launch attempt was scrubbed due to bad weather conditions. He speaks on Multiplanetary, Moon Base, upcoming Space Travel and more! In the video “Elon Musk’s post-launch speech on Crew Demo-2 success, Starship and Moon Mission in 11 minutes“, below:

In the video “Live: Trump delivers remarks at the Kennedy Space Center after SpaceX, NASA launch“, below:

You may also be interested in these video below:

The advantages and disadvantages of Crew Dragon and Starliner have been sparred over for many years. In this video, I hope to settle the up and downsides of each spacecraft, and hopefully let you all decide which one you’d want a seat on. Although, I’m beginning to think I know which one you will prefer already! Dragon 2 is a class of reusable spacecraft developed and manufactured by U.S. aerospace manufacturer SpaceX, intended as the successor to the Dragon cargo spacecraft. The spacecraft launches atop a Falcon 9 Block 5 rocket and returns via ocean splashdown. When compared to Dragon, Crew Dragon has larger windows, new flight computers and avionics, redesigned solar arrays, and a modified outer mold line. The spacecraft has two planned variants – Crew Dragon, a human-rated capsule capable of carrying up to seven astronauts, and Cargo Dragon, an updated replacement for the original Dragon. Crew Dragon is equipped with an integrated launch escape system in a set of four side-mounted thruster pods with two SuperDraco engines each. The Boeing Starliner (CST-100 – Crew Space Transportation-100) is a crew capsule manufactured by Boeing as its participation in NASA’s Commercial Crew Development (CCDev) program. Its primary purpose is to transport crew to the International Space Station (ISS) and to private space stations such as the proposed Bigelow Aerospace Commercial Space Station. The capsule has a diameter of 4.56 m, which is slightly larger than the Apollo command module and smaller than the Orion capsule. The Boeing Starliner holds a crew of up to seven people and is being designed to be able to remain in-orbit for up to seven months with the reusability of up to ten missions. It is designed to be compatible with four launch vehicles: Atlas V, Delta IV, Falcon 9, and Vulcan, in the video “SpaceX Crew Dragon vs Boeing Starliner Explained“, below:

There are millions of asteroids in our solar system. Because some are full of materials that are rare on Earth, they have been valued at stupendous amounts. But the most valuable resource in space may be something that’s abundant back on the ground, in the video “Who Wants To Be A Trillionaire?“, below:

With SpaceX aiming to send the first humans to Mars in 2024, they will need to set up the essentials like water and power before they get there. This video looks at what the first Martian base might look like and how the astronauts will get their food on Mars, in the video “What will SpaceX do when they get to Mars?“, below:

There’s a new trend going around in the commercial space industry when it comes to launch abort systems. All three commercial companies who are putting abort systems on their crewed vehicles have ditched the classic launch abort tower we’ve seen dominate abort systems in the past. Previous vehicles like the Mercury capsule, the Apollo capsule and even the Soyuz all used an escape tower that sat on top of the crew module, capable of pulling the vehicle away from a failing rocket in a hurry. And to make this topic even more interesting, we’re seeing another trend in abort systems… SpaceX’s Crew Dragon and Boeing’s Starliner capsules both are using liquid fueled abort motors instead of solid rocket motors. So today we’re going to talk about the design considerations that have made SpaceX, Boeing and Blue Origin ditch abort towers on their crewed vehicles and we’re also going to evaluate why the heck Boeing and SpaceX are going with liquid motors instead of solid motors. And with both Boeing and SpaceX having experienced serious setbacks and complications with their liquid fueled abort systems, including the loss of a test vehicle, it raises the question… is it even a good idea?…. in the video “Why have SpaceX, Boeing & Blue Origin ditched abort towers?“, below: