Catching Dog/Hope Is Independent Of The Apparatus Of Logic 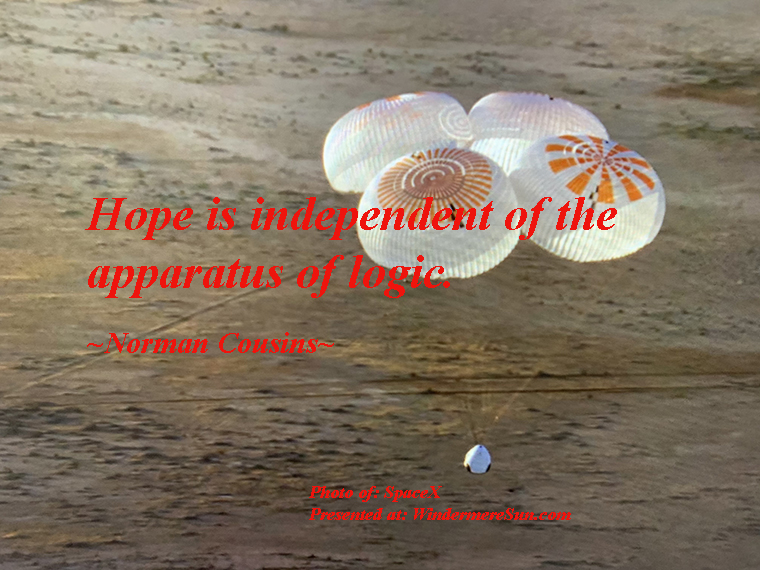 Quote of 5/31/2020, “Hope is independent of the apparatus of logic.” (Quote of: Norman Cousins, Photo of: SpaceX, Presented at: WindermereSun.com) 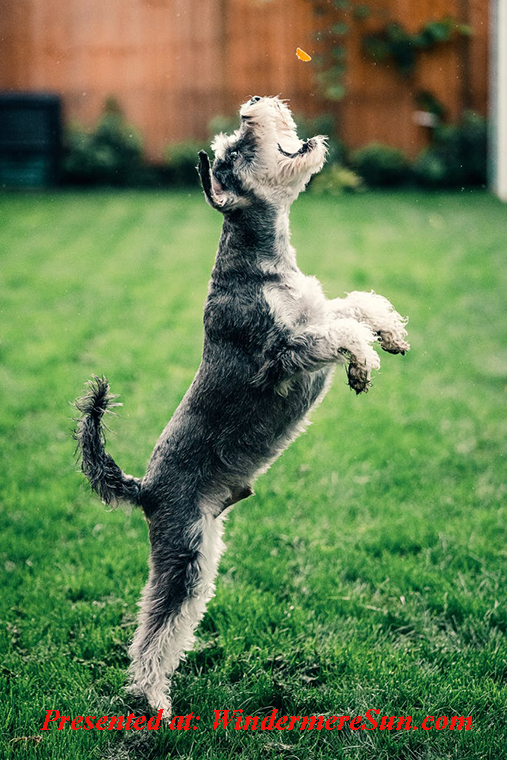 Quote of 5/31/2020, “Hope is independent of the apparatus of logic.” (Quote of: Norman Cousins, Photo of: SpaceX, Presented at: WindermereSun.com)

Norman Cousins once said, “Hope is independent of the apparatus of logic.”

To find out more about Norman Cousins, please refer to the excerpt from wikipedia, in italics, below:

He joined the staff of the New York Evening Post (now the New York Post) in 1934, and in 1935 was hired by Current History as a book critic. He later ascended to the position of managing editor. He also befriended the staff of the Saturday Review of Literature (later renamed Saturday Review), which had its offices in the same building, and by 1940, joined the staff of that publication as well. He was named editor-in-chief in 1942, a position he would hold until 1972. Under his direction, circulation of the publication increased from 20,000 to 650,000.[1]

Cousins’s philosophy toward his work was exemplified by his instructions to his staff “not just to appraise literature, but to try to serve it, nurture it, safeguard it.” Cousins believed that “there is a need for writers who can restore to writing its powerful tradition of leadership in crisis.” He was a lifetime believer in the power of hope, and in the realism of optimism. One of his well-known lines, “Life is an adventure in forgiveness,” has survived him. But Cousins had no patience for those who consciously bend truth, whether for personal expediency or in the political sphere. The integrity of words, in speech and in writing, was sacred to him. To his mind, the honest use of words was an absolute value, and the distinguishing mark of the human being.[citation needed]

Cousins joined the University of California, Los Angeles faculty in 1978[5] and became an adjunct professor in the Department of Psychiatry and Biobehavioral Sciences.[1] He taught ethics and medical literature. His research interest was the connection between attitude and health.[3]

His daughter, Sarah Shapiro, who had worked there as a college student, cited the head of SR’s advertising department that “in 30 years as editor of Saturday Review, my father had never fired anyone.” [6]

Politically, Cousins was a tireless advocate of liberal causes, such as nuclear disarmament and world peace, which he promoted through his writings in Saturday Review. In a 1984 forum at the University of California, Berkeley, titled “Quest for Peace”, Cousins recalled the long editorial he wrote on August 6, 1945, the day the United States dropped the atomic bomb in Hiroshima. Titled “The Modern Man is Obsolete”, Cousins, who stated that he felt “the deepest guilt” over the bomb’s use on human beings, discussed in the editorial the social and political implications of the atomic bomb and nuclear power. He rushed to get it published the next day in the Review, and the response was considerable, as it was reprinted in newspapers around the country and enlarged into a book that was reprinted in different languages.[citation needed]

Following the 1962 Cuban Missile Crisis, President John F. Kennedy saw that only he could find the terms that would be accepted by Nikita Khrushchev to avert nuclear war. Both sides used unofficial intermediaries to relay messages back and forth outside the usual diplomatic routes. For example Kennedy used Norman Cousins, who was well appreciated in Moscow for his leadership of SANE, the Committee for a SANE Nuclear Policy. This helped the two leaders forge the highly successful Limited Test Ban Treaty of 1963.[7]

Despite his role as an advocate of liberalism, he jokingly expressed opposition to women entering the workforce. In 1939, upon learning that the number of women in the workforce was close to the number of unemployed males, he offered this solution: “Simply fire the women, who shouldn’t be working anyway, and hire the men. Presto! No unemployment. No relief rolls. No depression.”[8]

In the 1950s, Cousins played a prominent role in bringing the Hiroshima Maidens, a group of twenty-five Hibakusha, to the United States for medical treatment.[9][10]

In the 1960s, he began the American-Soviet Dartmouth Conferences for peace process.[11]

Cousins also wrote a collection of non-fiction books on the same subjects, such as the 1953 Who Speaks for Man? , which advocated a World Federation and nuclear disarmament. He also served as president of the World Federalist Association and chairman of the Committee for Sane Nuclear Policy, which in the 1950s warned that the world was bound for a nuclear holocaust if the threat of the nuclear arms race was not stopped. Cousins became an unofficial ambassador in the 1960s, and his facilitating communication between the Holy See, the Kremlin, and the White House helped lead to the Soviet-American test ban treaty, for which he was thanked by President John F. Kennedy and Pope John XXIII, the latter of whom awarded him his personal medallion. Cousins was also awarded the Eleanor Roosevelt Peace Award in 1963, the Family Man of the Year Award in 1968, the United Nations Peace Medal in 1971, the Niwano Peace Prize and the Albert Schweitzer Prize for Humanitarianism, both in 1990.[3] He also served on the board of trustees for Science Service, now known as Society for Science & the Public, from 1972 to 1975.