The Sanford dam failing at about 7:40 p.m. Tuesday. (Photo courtesy of Tiffany Thibodeaux, Presented at: WindermereSun.com) 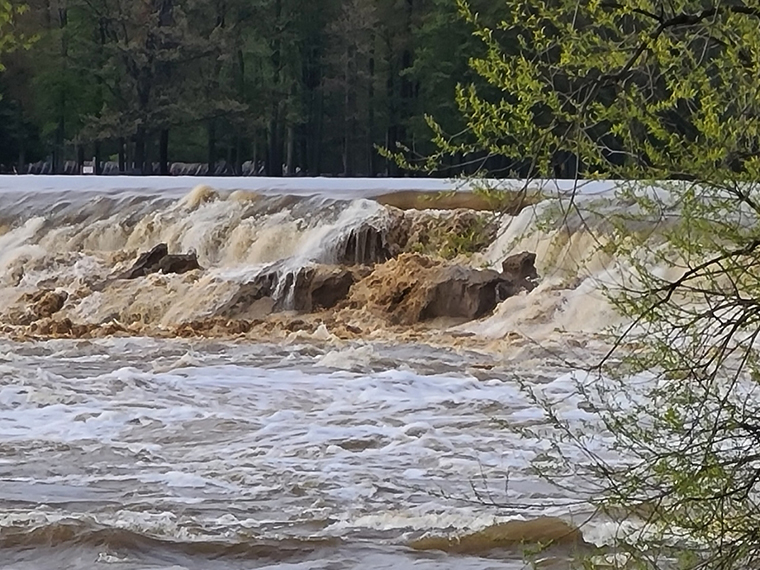 The Sanford dam failing at about 7:40 p.m. Tuesday. (Photo courtesy of Tiffany Thibodeaux, Presented at: WindermereSun.com)

After two dams, Sanford Dam and Edenville Dam, were breached by rising rainwater, over 10,000 people have been evacuated in central Michigan on May 20, 2020. The breach left some areas under several feet of water. Governor of Michigan, Gretchen Whitmer, said downtown may be ‘under approximately nine feet of water’ as of last Wednesday, in the video “Michigan dam failures force thousands to flee flooding“, below:

Unprecedented flooding was ongoing Wednesday morning in Midland County, Michigan, after a pair of dams collapsed following record rainfall. Thousands of residents have been told to evacuate as floodwaters gush into the communities along the Tittabawassee River, inundating homes and businesses and prompting an emergency declaration from Michigan Gov. Gretchen Whitmer (D), in the video “WATCH: Michigan Gov. Whitmer provides update on dam break in Edenville, Mich.”, below:

In the video “2 dam breaches in Central Michigan force mass evacuations over flooding concerns“, below:

“Only 1% of our second half revenue is dependent on any of the products that come out of Midland,” Corteva CEO Jim Collins said on “Mad Money.” in the video “Corteva CEO talks impact of mid-Michigan dam failure on business“, below:

When the Edenville Dam embankment failed on Tuesday, March 19, 2020, it quickly drained Wixom Lake. This footage captured on May 20 shows the drained lake, in the video “Michigan lake disappears after dam failure“, below:

A pair of dams in Central Michigan failed, sending water gushing into homes and businesses. Some 10,000 people were ordered to evacuate while the state is under a stay-at-home order because of coronavirus, in the video “State of Emergency In Michigan After Dam Failure And Flooding, NBC Nightly News“, below:

Rapidly rising water has overtaken dams and forced the evacuation of about 10,000 people in central Michigan, where flooding struck several communities along rain-swollen waterways, in the video “Flooding from Dam Failure Leaves Trail of Destruction in Michigan“, below:

Catastrophic flooding caused by dam failure in mid-Michigan has left shocking damage to roads, houses and entire cities in the area, in the video “Flooding: Lake Wixom emptied in Edenville“, below:

Thousands are now looking for ways to clean up and rebuild. The Michigan Republican Party is asking the state’s Democratic attorney general to turn over the dam failure investigation to federal authorities. The Federal Energy Regulatory Commission (FERC) is ordering Boyce Hydro Powers, owner of the Edenville dam, to form an independent team to investigate the conditions of the three other dams it owns, including the Sanford Lake dam, which is still in danger of collapsing after last Tuesday’s heavy rainfall.

Many are pointing to Boyce Hydro as the main culprit, revealing its long history of safety violations. But the Edenville dam also received multiple warnings from the federal government for its safety violations since 1999. According to FERC’s report, the dam’s spillway capacity only reached half of the required Probable Maximum Flood (PMF) value,  meaning that the dam could not properly release the pressure from a standard amount of water flow and would be vulnerable under extreme weather conditions. Then, why was nothing done and why did these dams continue to operate even though the compliance with flood prevention standards was not fully observed?

So, here is the take by The Onion (publication known for its  parodies) on the topic: Officials in California dedicated the Folsom Dam Memorial, which will honor the nearby residents that will die when the faulty dam fails, in the video “Memorial Honors Victims Of Imminent Dam Disaster“, below:

It is time to re-evaluate various states’ and federal budgets for our infrastructure.