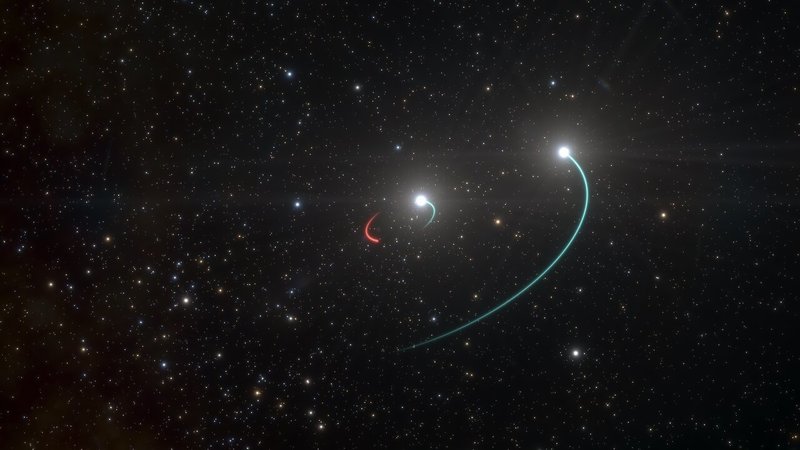 Scientists with the European Southern Observatory say system HR 6819, seen in this artist’s rendering, is composed primarily of two stars (orbits in blue) and a newly discovered black hole (orbit in red). The black hole is invisible, but it makes its presence known by the gravitational pull exerted on objects around it.
(Attribution: ESO/L. Calçada, Presented at: WindermereSun.com) 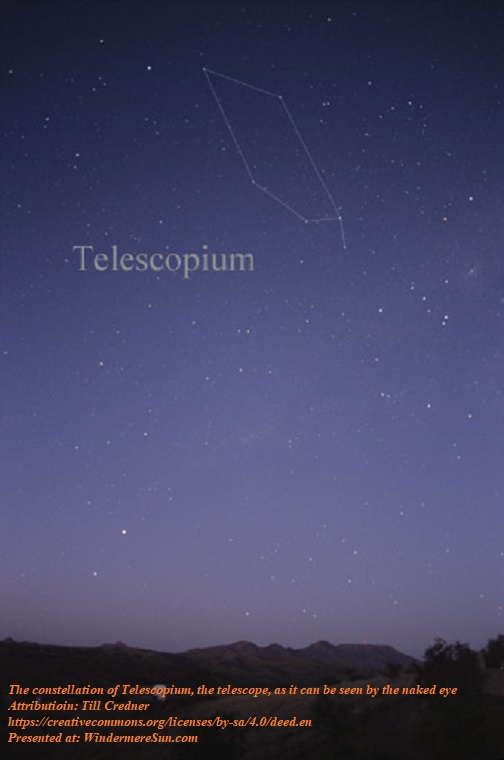 The constellation of Telescopium, the telescope, as it can be seen by the naked eye (Attribution: Till Credner, https://creativecommons.org/licenses/by-sa/4.0/deed.en, Presented at: WindermereSun.com)

Early in May, 2020, the European Southern Observatory announced that a team of astronomers has discovered the closest-known black hole to Earth, about 1,000 light years away. These astronomers found it hiding in a double-star system known as HR 6819, where the black hole rendered effectively invisible by gravity so strong that even light cannot escape. This black hole revealed itself in the orbit of the star nearer the center of the system. The Chile-based ESO scientist who led the study, Thomas Rivinius, said in a statement, “An invisible object with a mass at least four times that of the Sun can only be a black hole…There must be hundreds of millions of black holes out there, but we know about only very few…Knowing what to look for should put us in a better position to find them.” His team published their findings in the journal Astronomy & Astrophysics. This black hole is close enough that, during winter in the southern hemisphere, the two stars that are believed to compose its solar system can be seen without a telescope as a single point of light in the constellation Telescopium.

This new discovery has unseated the black hole found in system A0620-00 located more than 3,000 light years away in the constellation Monoceros as the nearest black hole to Earth.

Description from Cosmoknowledge for the video “Closest Black Hole To Earth Found“, below:

In the video “Scientists Found A Black Hole Very Close To Earth” by the Astro Bytes, below:

Description from Mr. Scientific for the video “Scientists Found A Black Hole Very Close To Earth!“, below:

There are millions of Black Holes in our Galaxy and most of them are yet to be discovered. Earlier V616 Mon was our nearest Black Hole located roughly 3000 light-years away. Recently scientists were studying HR 6819 which is a system of stars orbiting each other. Their observations revealed that there is a third object whose gravitational force is affecting these stars. Further research shows that there is a small stellar mass Black Hole roughly 4 times of massive than the Sun. It is located only 1000 light-years away making it nearest Black Hole discovered so far

Description from News Time for the video “Black hole found 1,000 light years from Earth“, below:

Astronomers say they have discovered a black hole on our doorstep, just 1,000 light years from Earth. It was found in a system called HR 6819, in the constellation Telescopium. The system appears through a telescope as a single bright star, but telltale signs in the light emitted have previously revealed there to be two stars present. Now experts say they have further analysed the data to discover there is another body within the system: a black hole with a mass over four times that of our sun, and the closest to Earth found so far.“We realised that one could not describe what we saw with just two stars,” said Dietrich Baade, an emeritus astronomer at European Southern Observatory (ESO) and a co-author of the study.“One of the stars is moving periodically, with a period of 40 days,” he said. “And the only way to understand that period and the very large [velocity] of 60km per second with a mass five times that of the sun was to infer that there is another very massive body which, however, is not visible.”In other words, a black hole – an object typically formed from the gravitational collapse of a massive star. The upshot, said Baade, is a so-called “hierarchical triple system”, which he explained by reference to a child’s mobile.“On the one branch of the mobile you have two stars hanging, one of which is not visible, which is black – that is the black hole. And these two objects are orbiting each other,” he said. “And the other branch of the mobile you have one star which is much farther away from the other two.”The black hole is unusual. “The hallmark of this black hole is that it is truly black,” he said. “Almost all the other black holes that we know are in the Milky Way – and there are only two dozen of them – shine very brightly in X-rays.”Baade said the other black holes each had a companion star that feeds them with gas. However, this does not appear to be the case for the newly discovered black hole and its nearby star.“This star is not so massive that it loses a lot of gas and therefore the black hole is starving and that makes it so dark.”He said only a handful of similar black holes had been found previously, and they merited further scrutiny. “It may also be the first ever [black hole of this kind],” he said. Baade added that HR 6819 – or rather, its stars – can be seen by the naked eye. “If you want to see it really overhead, you need to be at the southern tip of South America,” he said. The new work, which is published in the journal Astronomy & Astrophysics, is based on data collected using telescopes at ESO’s La Silla Observatory in Chile.“Theoretical models suggest that in the Milky Way there are between 100m and 1bn black holes,” said Baade. “We are finding a tip of an iceberg.”The discovery could shed light on an unusual system in the constellation Gemini called LB-1. This system has previously been suggested to be composed of a star and a tremendously massive black hole – a finding that has foxed experts.

In the video “Scientists Spotted A Black Hole Near The Earth!“, below:

Description from Anton Petrov for the video “How To See a Blackhole? 3 Ways Scientists Can Detect Them- Space Engine“, below:

We can’t see Black Holes directly but we can observe their effects. V616 Mon is our nearest black hole it’s 10 times heavy than our sun, in the video “Are We Safe From Nearest Black Hole?“, below:

I wonder how many invisible black holes there are out there?!