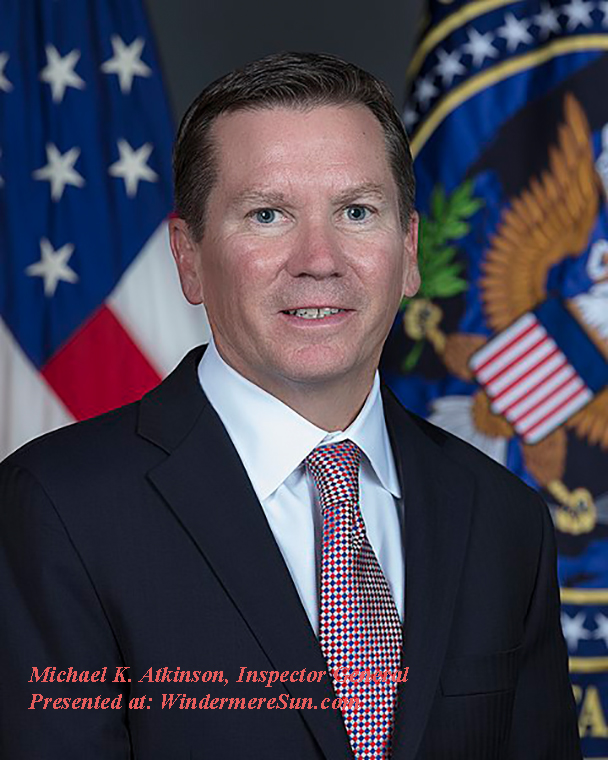 On Friday, April 3, 2020, President Trump dismissed Michael K. Atkinson, the Inspector General of the Intelligence Community, saying he “no longer” had confidence in the Inspector General. Atkinson will be removed from his office in 30 days, as outlined in a letter sent from Trump to the Senate Intelligence Committee on April 3.[1] He was put on administrative leave from the letter’s publication.[2]

For more on Michael K. Atkinson, please refer to the excerpt from wikipedia, in italics, below:

Michael Kevin Atkinson is an American attorney. He worked for the United States Department of Justice for approximately 15 years, before becoming the second Inspector General of the Intelligence Community. He assumed office on May 17, 2018. Atkinson is known for alerting Congress in September 2019 to a whistleblower complaint about President Donald Trump pressuring Ukraine to investigate political rival for the presidency Democrat Joe Biden and his son Hunter Biden; the scandal eventually led to Trump’s impeachment and acquittal.[1]

U.S. President Donald Trump defends his decision to fire the top watchdog of the U.S. Intelligence Community, saying Michael Atkinson did “a terrible job” in handling the whistleblower complaint that triggered an impeachment probe of Trump last year, in the video “Trump defends firing Inspector General“, below:

Chairman Adam Schiff tells Ali Velshi that Donald Trump’s late-Friday-night firing of the Inspector General who flagged the whistleblower complaint to Congress is the president “retaliating against the people that are on his enemies list.” in the video “Chairman Schiff Reacts To Trump Firing Intel IG, The Last Word, MSNBC“, below:

For more on the Atkinson’s involvement with Trump-Ukraine scandal that led to Trump’s firing of Atkinson, in the excerpt from wikipedia, in italics, below:

Inspector General of the Intelligence Community

Atkinson became Inspector General of the Intelligence Community (ICIG) in May 2018.[3] He was nominated to the position in November 2017 by President Donald Trump[9] and was confirmed by the United States Senate by voice vote on May 14, 2018.[10] At his confirmation hearings, Atkinson indicated that he would bring order to the troubled ICIG’s office, which had a reputation for dysfunction, and pledged to revive a whistleblower program that had become virtually defunct under the previous Acting Inspector General,[11] saying that he would “encourage, operate, and enforce a program for authorized disclosures by whistleblowers within the intelligence community that validates moral courage without compromising national security and without retaliation.”[6] Restoring the whistleblower program was a major priority among members of the Senate Intelligence Committee.[11]

In August 2019, Atkinson, as inspector general, received a formal complaint from a whistleblower within the U.S. Intelligence Community who stated that they had learned, in the course of normal duties, that Trump had abused his power “to solicit interference from a foreign country in the 2020 U.S. election,” specifically by pressuring a foreign government (Ukraine) to investigate former Vice President Joe Biden and his son Hunter Biden.[12][13] The whistleblower, a Central Intelligence Agency (CIA) officer detailed to the White House,[14] submitted the report to Atkinson under the provisions of the Intelligence Community Whistleblower Protection Act (ICWPA).[15]

Clashing with Maguire,[7] Atkinson himself notified Congress about the existence of the whistleblower report.[20] In a letter to the House Intelligence Committee, Atkinson said that he and Maguire were “at an impasse”[7] and wrote that “As it now stands, my unresolved differences with the Acting DNI are affecting the execution of two of my most important duties and responsibilities” (to whistleblowers and to Congress).[11] The Trump administration eventually released the complaint[12][13] following demands for its release from the Senate[21] and House.[22] The complaint prompted the launch of a House impeachment inquiry against Trump.[23] The whistleblower complaint brought public attention to Atkinson, who previously was a little-known official.[7]

In mid-November, news reports revealed that the president was angry with the IG’s perceived disloyalty and wanted to fire him.[24][25][26][27] He was dismissed by President Trump on April 3, 2020.[1]