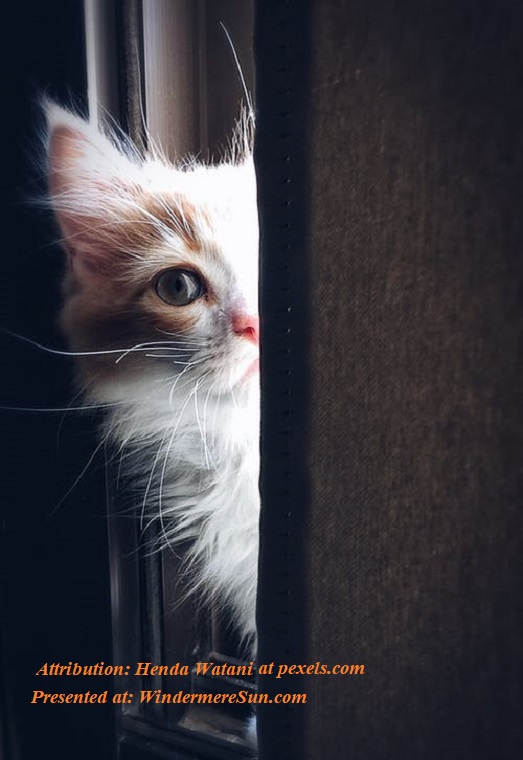 Pet of 3/21/2020 (Attribution: Henda Watani at pexels.com, Presented at: WindermereSun.com) 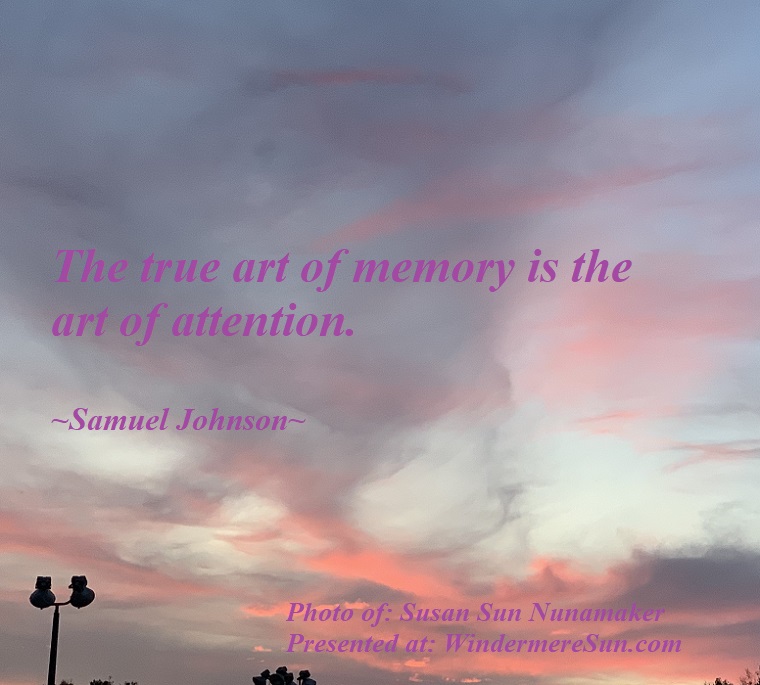 Quote of 3/21/2020, “The true art of memory is the art of attention.” (Quote of: Samuel Johnson, Photo of: Susan Sun Nunamaker, Presented at: WindermereSun.com)

Pet of 3/21/2020 (Attribution: Henda Watani at pexels.com, Presented at: WindermereSun.com)

What are you peeking at?

Quote of 3/21/2020, “The true art of memory is the art of attention.” (Quote of: Samuel Johnson, Photo of: Susan Sun Nunamaker, Presented at: WindermereSun.com)

Samuel Johnson once said, “The true art of memory is the art of attention.”

For more about Samuel Johnson, please refer to the excerpt from wikipedia, in italics, below:

Samuel Johnson (18 September 1709 [OS 7 September] – 13 December 1784), often referred to as Dr Johnson, was an English writer who made lasting contributions to English literature as a poet, playwright, essayist, moralist, literary critic, biographer, editor, and lexicographer. Religiously, he was a devout Anglican[1], and politically a committed Tory. The Oxford Dictionary of National Biography describes Johnson as “arguably the most distinguished man of letters in English history”.[2] He is the subject of James Boswell‘s The Life of Samuel Johnson, described by Walter Jackson Bate as “the most famous single work of biographical art in the whole of literature”.[3]

Born in Lichfield, Staffordshire, Johnson attended Pembroke College, Oxford, for just over a year, but a lack of funds forced him to leave. After working as a teacher, he moved to London, where he began to write for The Gentleman’s Magazine. His early works include the biography Life of Mr Richard Savage, the poems London and The Vanity of Human Wishes, and the play Irene.

After nine years of work, Johnson’s A Dictionary of the English Language was published in 1755. It had a far-reaching effect on Modern English and has been acclaimed as “one of the greatest single achievements of scholarship”.[4] This work brought Johnson popularity and success. Until the completion of the Oxford English Dictionary 150 years later, Johnson’s was the pre-eminent British dictionary.[5] His later works included essays, an influential annotated edition of The Plays of William Shakespeare, and the widely read tale The History of Rasselas, Prince of Abissinia. In 1763, he befriended James Boswell, with whom he later travelled to Scotland; Johnson described their travels in A Journey to the Western Islands of Scotland. Towards the end of his life, he produced the massive and influential Lives of the Most Eminent English Poets, a collection of biographies and evaluations of 17th- and 18th-century poets.

Johnson was a tall[a] and robust man. His odd gestures and tics were disconcerting to some on first meeting him. Boswell’s Life, along with other biographies, documented Johnson’s behaviour and mannerisms in such detail that they have informed the posthumous diagnosis of Tourette syndrome,[6] a condition not defined or diagnosed in the 18th century. After a series of illnesses, he died on the evening of 13 December 1784, and was buried in Westminster Abbey. In the years following his death, Johnson began to be recognized as having had a lasting effect on literary criticism, and he was claimed by some to be the only truly great critic of English literature.[7]