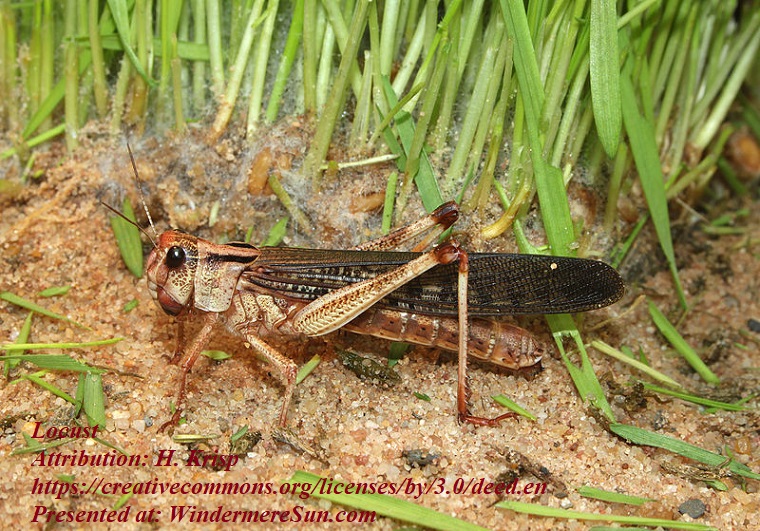 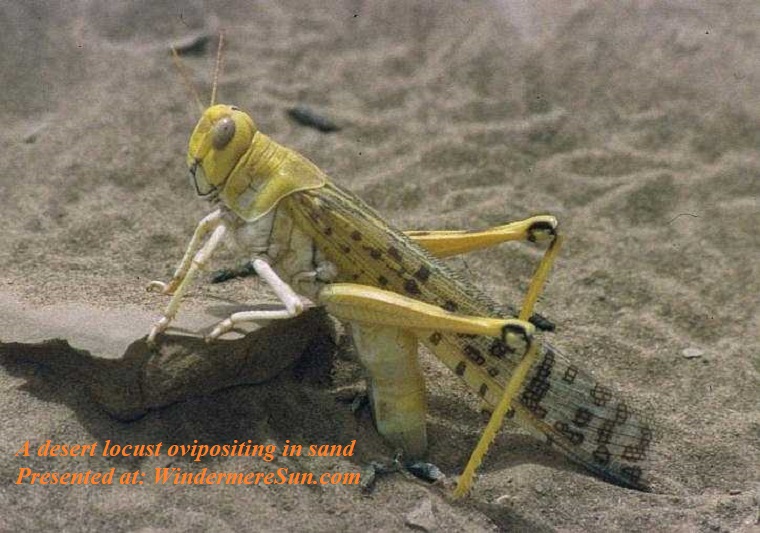 A desert locust ovipositing in sand (Presented at: WinderemreSun.com)

Climate Change and the inability of governments in Somalia and Yemen ( where the locusts breed) weakened by years of war, to take actions result in neighboring countries such as Ethiopia and Kenya to have a tough time in killing these locusts. This has been the worst locusts outbreak in more than 25 years, threatening the livelihood of millions in East Africa and South Asia. Somalia and Pakistan have already declared the state of emergency. United Nation is saying that if action in Somalia is not taken fast enough, the Somalia infestation can become the most devastating plague in living memory.

The insects are the world’s most dangerous migratory pests. Locusts can swarm in their billions and in January, densely enough to force an Ethiopian Airlines plane off course, in the video “What’s caused an outbreak of desert locusts in East Africa and South Asia? Inside Story“, below:

The Washington Post traveled to southern Ethiopia, which is facing its worst locust outbreak in generations after an uncommon weather pattern in the Indian Ocean caused relentless rains across East Africa, in the video “Billions of locusts are descending on Ethiopia“, below:

Millions of people in East Africa are facing an impending disaster – as swarms of locusts are ravaging fields of crops. The UN is calling for urgent action saying the food security of people in the affected region is at risk. More rainfall in the weeks ahead will bring fresh vegetation to feed new generations of the pests, in the video “Locusts in East Africa threaten to become a plague, DW News“, below: