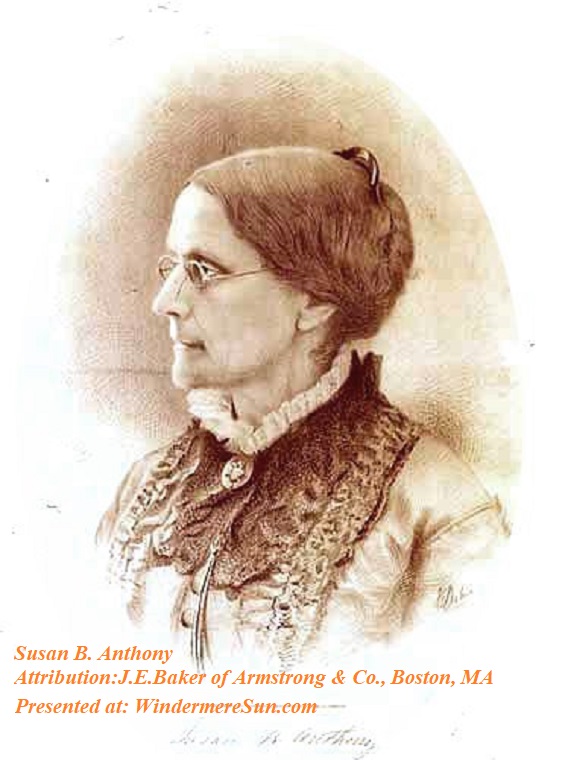 On this February 15, 2020, let’s celebrate the birth of Susan B. Anthony,  a very important American social reformer and women’s rights activist who played a pivotal role in the women’s suffrage movement.  One of the most famous women in American history, she played a prominent role in the women’s suffrage movement; the 19th Amendment, which gave women the right to vote, is named in her honor, in the video “A Leader Of Women’s Rights, Susan B. Anthony, Biography“, below:

In the video “SUSAN B ANTHONY“, below:

Susan B. Anthony knew from a young age that women deserved the same rights as men, especially the right to vote! Read along as Susan strives for equality through delivering speeches, handing in a new declaration to Congress and even getting arrested, in the video “Susan B. Anthony, Fighter for Women’s Rights!” below:

Kate Wilhelm, Emilee Bennett, and Jenna Fellows competed in the National History Day Contest in Washington DC with this documentary. They created and presented it at the Thomas Edison Charter School North contest, the Northern Utah Regional contest, and finally won second place at the Utah State Contest with Jeff Low as their teacher, in the video “Susan B. Anthony and Elizabeth Cady Stanton: The Fight for Women’s Rights“, below:

To see why Susan B. Anthony is such an important figure in the American history, please refer to the excerpt from Wikipedia, in italics, below:

Susan B. Anthony (February 15, 1820 – March 13, 1906) was an American social reformer and women’s rights activist who played a pivotal role in the women’s suffrage movement. Born into a Quaker family committed to social equality, she collected anti-slavery petitions at the age of 17. In 1856, she became the New York state agent for the American Anti-Slavery Society.

In 1851, she met Elizabeth Cady Stanton, who became her lifelong friend and co-worker in social reform activities, primarily in the field of women’s rights. In 1852, they founded the New York Women’s State Temperance Society after Anthony was prevented from speaking at a temperance conference because she was female. In 1863, they founded the Women’s Loyal National League, which conducted the largest petition drive in United States history up to that time, collecting nearly 400,000 signatures in support of the abolition of slavery. In 1866, they initiated the American Equal Rights Association, which campaigned for equal rights for both women and African Americans. In 1868, they began publishing a women’s rights newspaper called The Revolution. In 1869, they founded the National Woman Suffrage Association as part of a split in the women’s movement. In 1890, the split was formally healed when their organization merged with the rival American Woman Suffrage Association to form the National American Woman Suffrage Association, with Anthony as its key force. In 1876, Anthony and Stanton began working with Matilda Joslyn Gage on what eventually grew into the six-volume History of Woman Suffrage. The interests of Anthony and Stanton diverged somewhat in later years, but the two remained close friends.

In 1872, Anthony was arrested for voting in her hometown of Rochester, New York, and convicted in a widely publicized trial. Although she refused to pay the fine, the authorities declined to take further action. In 1878, Anthony and Stanton arranged for Congress to be presented with an amendment giving women the right to vote. Introduced by Sen. Aaron A. Sargent (R-CA), it later became known colloquially as the Susan B. Anthony Amendment. It was ratified as the Nineteenth Amendment to the U.S. Constitution in 1920.

Anthony traveled extensively in support of women’s suffrage, giving as many as 75 to 100 speeches per year and working on many state campaigns. She worked internationally for women’s rights, playing a key role in creating the International Council of Women, which is still active. She also helped to bring about the World’s Congress of Representative Women at the World’s Columbian Exposition in Chicago in 1893.

When she first began campaigning for women’s rights, Anthony was harshly ridiculed and accused of trying to destroy the institution of marriage. Public perception of her changed radically during her lifetime, however. Her 80th birthday was celebrated in the White House at the invitation of President William McKinley. She became the first female citizen to be depicted on U.S. coinage when her portrait appeared on the 1979 dollar coin.

You may purchase and view the full-length movie, “Not For Ourselves Alone“, about Susan B. Anthony by clicking HERE.

The movie “Not For Ourselves Alone” is also available via amazon.com, by clicking HERE.

To see the timeline of women’s suffrage, please click HERE.