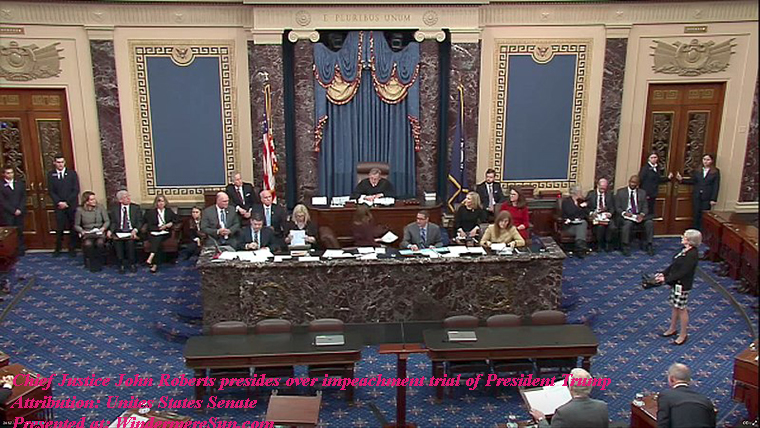 *President’s legal defense team does not contest the fact that military aid to Ukraine was cut off.

*President’s legal defense team does not contest the fact that President Trump solicited a foreign nation to interfere with our election.

*Pertinent witnesses and documents are needed for a real trial.

A rigged trial, without pertinent witnesses and/or documents, may occur in other countries, but should not occur here in USA.

A nearly 90-minute recording released of President Donald Trump at a 2018 dinner with indicted businessmen he has claimed he doesn’t know includes Trump speaking animatedly about removing the US ambassador to Ukraine, in the video “New audio video undermine President Trump’s claim about Lev Parnas“, below:

After reports emerged of the existence of an audio tape that appears to include Trump ordering aides to “get rid” of Amb. to Ukraine Marie Yovanovitch, ABC published the audio online, in the video “What Does Audio Of Trump Seeming To Order Yovanovitch’s Firing Change? The 11th Hour, MSNBC“, below:

The video above presented the obvious suggestion: using the Secret Ballot for the Senate impeachment trial seems to be the most reasonable choice, in addition to having a real trial by having witnesses and documents. Nancy Pelosi deserves  much praise for having guided the impeachment trial process most effectively.

Congressman Eric Swalwell (D-CA) discusses the hundreds of new pages of documents that show how far up in the Republican party the Ukrainian scheme goes, in the video “Rep. Eric Swalwell On The Trove Of New Impeachment Evidence, All In, MSNBC“, below:

As the first week of Pres. Trump’s Senate trial wraps up, four Democratic senators who served during the Bill Clinton trial for an exclusive joint interview with MSNBC Chief Legal Correspondent Ari Melber. All four say that abuse of power is an impeachable offense and a separate felony is not required for impeachment – fact-checking recent claims by Pres. Trump’s allies – while they differed on aspects of the Democratic House Managers’ arguments on obstruction of Congress. The four former Senators are Russ Feingold, Robert Torricelli, John Breaux and Byron Dorgan, who added that any President “has a responsibility to respond to the Congress, to provide those documents and those witnesses” requested in the Ukraine and impeachment investigations, in the video “Trump Trial: See Four Of Mitch McConnell’s Own Senate Veterans Fact-Check Him On Convicting POTUS“, below:

If the United States Congress cannot stand up to a bully of a POTUS who has contempt for the rule of law, the Congress will no longer be able to fulfill its responsibility of check and balance on the POTUS. This is the cross road when we will find out whether United States Senate is the institution that it is supposed to be or it is going to fail due to their fear of a bully.