News Anchor Jim Lehrer Reached The End Of His Journey, At 85 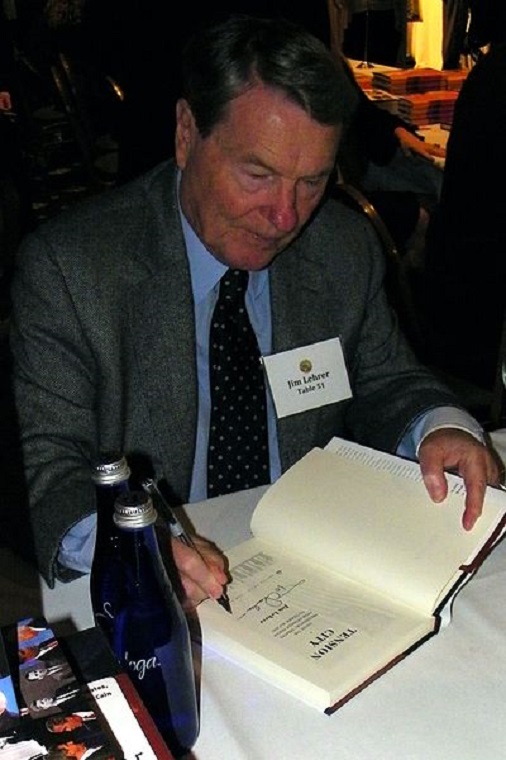 The television newsman, executive editor, news anchor, author, moderator of presidential debates, and co-founder of PBS NewsHour, Jim Lehrer, died in his home in Washington, D.C., on January 23, 2020, at age 85.

Jim Lehrer, longtime anchor of the PBS NewsHour, has died at the age of 85. Lehrer co-founded the show that would become the NewsHour with his journalism partner Robert MacNeil following their gavel-to-gavel coverage of the Watergate hearings in 1973. Their approach to reporting the news helped lay the foundation for modern public media reporting. Among Lehrer’s tenets of journalism was to “Carefully separate opinion and analysis from straight news stories and clearly label everything.” in the video “Judy Woodruff remembers longtime NewsHour anchor Jim Lehrer“, below:

PBS NewsHour co-founder Jim Lehrer, a giant in journalism known for his tenacity and dedication to simply delivering the news, died peacefully in his sleep at home on Thursday, at the age of 85, in the video “Remembering Jim Lehrer“, below:

More on Jim Lehrer, excerpt from wikipedia, in italics, below:

James Charles Lehrer was an American journalist and novelist.[2] Lehrer was the executive editor and a news anchor for the PBS NewsHour on PBS, known for his role as a debate moderator during U.S. presidential election campaigns. He authored numerous fiction and non-fiction books that drew upon his experience as a newsman, along with his interests in history and politics.[3]

Lehrer was born in Wichita, Kansas—the son of Lois Catherine (née Chapman), a bank clerk; and Harry Frederick Lehrer, a bus station manager.[4] He attended middle school in Beaumont, Texas, and graduated from Thomas Jefferson High School in San Antonio, where he was a sports editor for the Jefferson Declaration. He graduated with an associate’s degree from Victoria College, and a bachelor’s degree in journalism from the Missouri School of Journalism at the University of Missouri in 1956.[5]

After graduating from college, Lehrer joined the United States Marine Corps,[6] for three years, as an infantry officer. He attributed his service and travels with helping him to look past himself and feel a connection to the world that he would not have otherwise experienced.[7]

In 1959, Lehrer began his career in journalism at The Dallas Morning News in Texas. Later, he worked as a reporter for the Dallas Times-Herald, where he covered the assassination of John F. Kennedy in 1963. There, he was a political columnist for several years, and in 1968 he became the city editor.[8]

In October 1975, Lehrer became the Washington correspondent for the “Robert MacNeil Report” on Thirteen/WNET New York. Two months later on December 1, 1975, he was promoted to co-anchor, and the program was accordingly renamed “The MacNeil/Lehrer Report”. In September 1983, Lehrer and MacNeil relaunched their show as The MacNeil/Lehrer NewsHour, which was renamed The NewsHour with Jim Lehrer, following McNeil’s departure in 1995. The program was renamed the PBS NewsHour in 2009.[3]

Lehrer underwent a heart valve surgery in April 2008, allowing Ray Suarez to anchor in his stead until Lehrer’s return on June 26, 2008.[9]

Lehrer stepped down as anchor of the PBS NewsHour on June 6, 2011, but continued to moderate the Friday news analysis segments and be involved with the show’s production company, MacNeil/Lehrer Productions.[10]

Lehrer received several awards and honors during his career in journalism, including several Emmys; the George Foster Peabody Broadcast Award; a William Allen White Foundation Award for Journalistic Merit; and the University of Missouri School of Journalism‘s Medal of Honor. In 2004, he was awarded an honorary Doctor of Journalism degree by McDaniel College.[11][12]

Lehrer was involved in several projects related to U.S. presidential debates, including the Debating Our Destiny documentaries in 2000 and 2008, which feature excerpts of exclusive interviews with many of the presidential and vice presidential candidates since 1976.[13] Nicknamed The Dean of Moderators by journalist Bernard Shaw, Lehrer moderated twelve presidential debates, spanning from 1988 to 2012.[14] As of 2016, Lehrer served on the board of the Commission on Presidential Debates (CPD).[15]

The last debate that Lehrer moderated was the first general election debate of the 2012 election. He originally had sworn off moderating any debates after 2008; however, the CPD persisted, and he accepted as he was interested in the new format.[16] The debate was held at the University of Denver and covered domestic policy issues. Lehrer’s performance as a moderator, in which he frequently allowed the candidates to exceed the given time limits, received mixed reviews; while he received criticism for his lenient enforcement of time rules and open-ended questions, his approach also received praise for letting the candidates have some control in the debate on their own terms.[17][18]

For six decades, Lehrer was married to Kate Lehrer, who is also a novelist. They had three daughters and six grandchildren.[3] His father was a bus driver who briefly operated a bus company. Lehrer was an avid bus enthusiast, a hobbyist, and a collector of bus memorabilia—including depot signs, driver caps, and antique toy buses.[19][20] As a college student in the 1950s, he worked as a Trailways ticket agent in Victoria, Texas. He also was a supporter of the Pacific Bus Museum in Williams, California, and the Museum of Bus Transportation in Hershey, Pennsylvania.[3]

Lehrer was a prolific writer and authored numerous novels, as well as several plays, screenplays, and three personal memoirs. His book, Top Down, is a novel based on the events surrounding the Kennedy assassination.[21] His last play, Bell, was produced by the National Geographic Society as part of their 125th anniversary celebration.