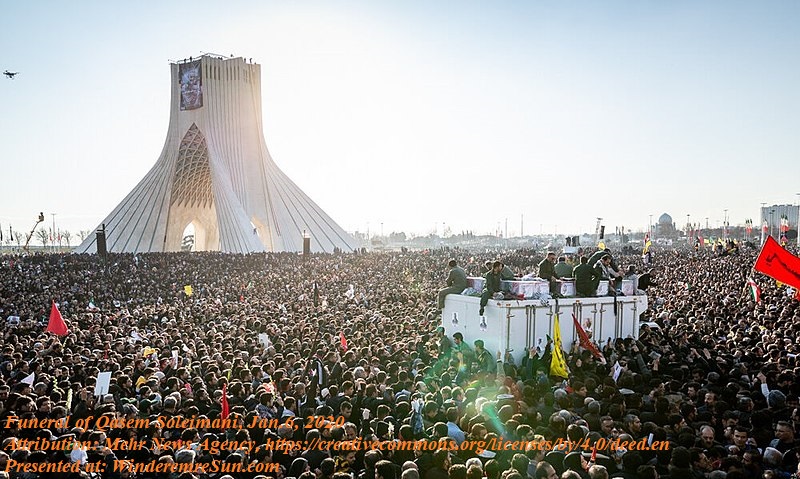 Based on the report of Independent, in italics, below:

As part of the incendiary and escalating crisis surrounding the assassination of Qassem Soleimani, there has come an explanation of why the Iranian commander was actually in Baghdad when he was targeted by a US missile strike. Iraq’s prime minister revealed that he was due to be meeting the Iranian commander to discuss moves being made to ease the confrontation between Shia Iran and Sunni Saudi Arabia – the crux of so much of strife in the Middle East and beyond.

The prime minister also disclosed that Donald Trump had called him to ask him to mediate following the attack on the US embassy in Baghdad. According to Iraqi officials contact was made with a number of militias as well as figures in Tehran. The siege of the embassy was lifted and the US president personally thanked Abdul-Mahdi for his help.

There was nothing to suggest to the Iraqis that it was unsafe for Soleimani to travel to Baghdad – quite the contrary. This suggests that Trump helped lure the Iranian commander to a place where he could be killed. It is possible that the president was unaware of the crucial role that Soleimani was playing in the attempted rapprochement with the Saudis. Or that he knew but did not care.

Adil Abdul-Mahdi was quite clear: “I was supposed to meet him in the morning the day he was killed, he came to deliver a message from Iran in response to the message we had delivered from the Saudis to Iran.”

Within the week after the Iraqi Parliament issued a nonbinding call for U.S. troops to leave Iraq, on Friday, January 10, 2020, the Iraqi Prime Minister Adil Abdul Mahdi asked the U.S. Secretary of State Mike Pompeo to set up a mechanism for U.S. troops to withdraw from Iraq, according to an Iraq statement reported by NBC News. Mahdi said, “Iraq is keen to keep the best relations with its neighbors and friends within the international community, and to protect foreign representations and interests and all those present on Iraqi soil.” He also indicated that U.S. has been moving troops into the country and operating aircraft in its airspace without Iraqi consent. Though a nonbinding call, it prompted Trump to threaten Iraq with sanctions and to demand repayment of billions of US$ spent in Iraq. Amidst this crisis, US and NATO have also paused their operations against ISIS.

Iraq’s parliament voted to expel U.S. troops from the country in response to the assassination of a powerful Iranian military commander by an American drone in Baghdad, in the video “Iraqi Parliament Votes to Expel U.S. Troops After Killing of Iranian General“, below:

Boris Johnson returned from holiday and broke his silence on the rising tension in the Middle East, in the video “Johnson ‘won’t lament’ Iranian general’s death as Iraqi MPs call for US troops to leave, ITV News“, below:

ABC News’ Martha Raddatz is in Tehran, Iran, where thousands mourn the Qassem Soleimani’s death. Trump’s decision to kill the general is the latest in decades of tension between the two countries, in the video “Mourners in Iran vow revenge for Soleimani’s death, Nightline“, below:

According to a leaked archive of secret Iranian spy cables obtained by The Intercept, Iranian intelligence officials in Iraq privately expressed concerns about General Soleimani’s brutal tactics during the fight against ISIS. Murtaza Hussain, a writer for The Intercept, joined CBSN to discuss his reporting on how Soleimani became so powerful, in the video “Secret Iranian spy cables show how Soleimani wielded his power in Iraq“, below:

Despite such a formal invitation to leave, the Trump administration appeared to be determined to keep U.S. troops in Iraq, even after the retaliatory Iranian strikes (for the killing of Iranian Major General Qasem Soleimani by Americans) on Wednesday, January 8, 2020, on bases housing U.S. military personnel in Iraq.

The Iranian supreme leader Ayatollah Ali Khamenei warned on Wednesday, January 8, 2020, that “these military actions are not sufficient for revenge. What is important is that the corrupt presence of America in this region comes to an end.”

The U.S. State Department’s chief spokeswoman, Morgan Ortagus, responded that U.S. officials would not discuss a military withdrawal from Iraq and that the U.S. presence in Iraq is a “force for good”. According to USA Today, Ortagus said, “At this time, any delegation sent to Iraq would be dedicated to discussing how to best recommit to our strategic partnership – not to discuss troop withdrawal, but our right, appropriate force posture in the Middle East.” She continued, “America is a force for good in the Middle East. Our military presence in Iraq is to continue the fight against ISIS and as the Secretary has said, we are committed to protecting Americans, Iraqis, and our coalition partners.”

Again, the solution lies in Accelerating Our Transition Into Renewable Energy such as Solar and Wind energy.

News Update for Jan. 10, 2020: CNN’s Erin Burnett says President Trump is changing his story about the details that led to the strike on Iranian General Qasem Soleimani, in the video “You cannot make this up… but Trump did. – Erin Burnett“, below: