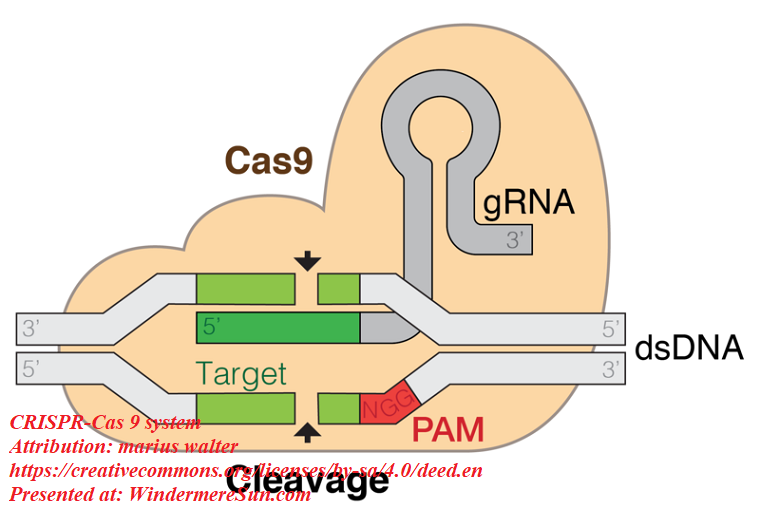 On Monday, December 30, 2019, the Chinese Shenzhen Nanshan District People’s Court sentenced a Chinese scientist He Jiankui, who created the world’s first ‘gene-edited’ babies to three years in prison and  3 million RMB/yuan (US$430,000), for illegally practicing medicine and that He and 2 other researchers fabricated ethical review documents. He admitted to altering genes of twin girls to make them immune to HIV infection and his involvement in the birth of a third ‘gene-edited’ baby. In the video “China jail ‘gene-editing’ scientist“, below:

In the video “Chinese scientist He Jiankui involved in gene-edited babies jailed for three years“, below:

In the video “Scientist claims to create world’s first gene-edited babies- TomoNews“, below:

Back in 2017, at a TEDx-Vienna: Creating genetically modified children is no longer a science fiction fantasy; it’s a likely future scenario. Biologist Paul Knoepfler estimates that within fifteen years, scientists could use the gene editing technology CRISPR to make certain “upgrades” to human embryos — from altering physical appearances to eliminating the risk of auto-immune diseases. In this thought-provoking talk, Knoepfler readies us for the coming designer baby revolution and its very personal, and unforeseeable, consequences, in the video “The ethical dilemma of designer babies, Paul Knoepfler“, below:

Back in 2017, there were already much discussions on the subject matter. Better, stronger, disease-free humans. Editing human DNA could save lives and enhance them. But should we be playing god? Genes determine our health, looks, the way we function. They’re the ingredients for life. The idea that we could one day change them is an exciting prospect, but also an ethical minefield. As science moves closer towards gene editing, the concern is that it could go too far and even create a new elite group of enhanced humans, in the video “Roundtable: Is human gene editing ethical?“

Back in 2016: CRISPR gene drives allow scientists to change sequences of DNA and guarantee that the resulting edited genetic trait is inherited by future generations, opening up the possibility of altering entire species forever. More than anything, this technology has led to questions: How will this new power affect humanity? What are we going to use it to change? Are we gods now? Join journalist Jennifer Kahn as she ponders these questions and shares a potentially powerful application of gene drives: the development of disease-resistant mosquitoes that could knock out malaria and Zika, in the video “Gene editing can now change an entire species – forever, Jennifer Kahn“, below:

It does appear that the global discussion and safeguard are needed for this technology.

For more on He Jiankui, please refer to excerpt from wikipedia, in italics, below:

He Jiankui ([xɤ̂ tɕjɛ̂nkʰwěi]; Chinese: 贺建奎; born 1984) is a Chinese biophysics researcher who was an associate professor in the Department of Biology of the Southern University of Science and Technology (SUSTech) in Shenzhen, China.[1][2][3][5]

He Jiankui became widely known in November 2018 after he had claimed that he had created the first human genetically edited babies,[6][7][8] twin girls known by their pseudonyms, Lulu and Nana.[9][10] The announcement in November 2018 of Lulu and Nana, who were born by mid-October 2018,[3][4] was met with widespread condemnation,[3][11][12] and on 29 November 2018, Chinese authorities suspended all his research activities.[13] Dr. William Hurlbut, Stanford University neuroscientist and bioethicist, reported that He Jiankui was staying in a university apartment in Shenzhen “by mutual agreement” and is free to leave.[14] Nonetheless, He Jiankui may have been under some form of surveillance.[15][16][17] On January 21, 2019, He Jiankui was fired by SUSTech according to the university’s announcement.[18]

In May 2019, lawyers in China reported, in light of the purported creation by He Jiankui of the first gene-edited humans, the drafting of regulations that anyone manipulating the human genome by gene-editing techniques, like CRISPR, would be held responsible for any related adverse consequences.[19] In December 2019, MIT Technology Review reported an overview of the controversy to date, including excerpts of the unpublished research manuscript.[20][21] On 30 December 2019, the Shenzhen Nanshan District People’s Court sentenced He to 3 years imprisonment and 3 million RMB fine.[22]

Born in Xinhua County, Loudi, Hunan in 1984,[10] He Jiankui was educated at the University of Science and Technology of China as an undergraduate student from 2002 to 2006.[10] He Jiankui entered Rice University in 2007 and received his Ph.D. degree in Physics under the supervision of Professor Michael W. Deem in 2010.[10] After his Ph.D., he worked as a postdoc fellow with Stephen Quake at Stanford University.[4][23] He Jiankui moved back to China in 2012 under the Thousand Talents Program and opened a lab at the Southern University of Science and Technology.[23] As part of the program, he was given 1 million yuan ($144,000) in angel funding, which he used to start biotech and investment companies.[24][25] He founded Direct Genomics in 2012 in Shenzhen, to develop single-molecule sequencing devices based on patents invented by Quake that had formerly been licensed by Helicos Biosciences. Direct Genomics received 40 million yuan ($4.5 million) in subsidies from Shenzhen, and raised hundreds of millions yuan more in private investment, but He sold his stake in 2019.[24][26] He Jiankui also founded Vienomics Biotech, which offers genome sequencing services for people with cancer.[25]

He Jiankui’s achievements were widely revered in Chinese media, including China Central Television which covered his research and described him as “the founding father of third-generation genome editing” during a program celebrating the 19th National Congress of the Communist Party of China.[27] He took an unpaid leave from the university starting in February 2018, and began conducting the genome-editing clinical experiment.[28][29][30] On 26 November 2018, he announced the birth of gene-edited human babies, Lulu and Nana.[29] Three days later, on 29 November 2018, Chinese authorities suspended all of his research activities, saying that his work was “extremely abominable in nature” and a violation of Chinese law.[13] In December 2018, following public outcry regarding his work, He Jiankui appeared to have gone missing.[31] China’s Southern University of Science and Technology denied the widespread rumors that he had been detained.

In 2010, at Rice University, He Jiankui and Michael W. Deem published a paper describing some details of the CRISPR protein; this paper was part of the early work on the CRISPR/Cas9 system, before it had been adopted as a gene editing tool.[23]

In 2017, He Jiankui gave a presentation at Cold Spring Harbor Laboratory describing work he did at Southern University of Science and Technology, in which he used CRISPR/Cas9 on mice, monkeys, and around 300 human embryos.[32]

In January 2019, scientists in China reported the creation of five identical cloned gene-edited monkeys, using the same cloning technique that was used with Zhong Zhong and Hua Hua – the first ever cloned monkeys – and Dolly the sheep, and the same gene-editing Crispr–Cas9 technique allegedly used by He Jiankui in creating the first ever gene-modified human babies Lulu and Nana. The monkey clones were made in order to study several medical diseases.[33][34]

In February 2019, scientists reported that the purportedly first-ever germline genetically edited humans, the twin babies Lulu and Nana, by Chinese researcher He Jiankui, may have inadvertently (or perhaps, intentionally[35]) had their brains enhanced.[36]