Cat with Long Whiskers/The Less You Talk, The More You’re Listened To 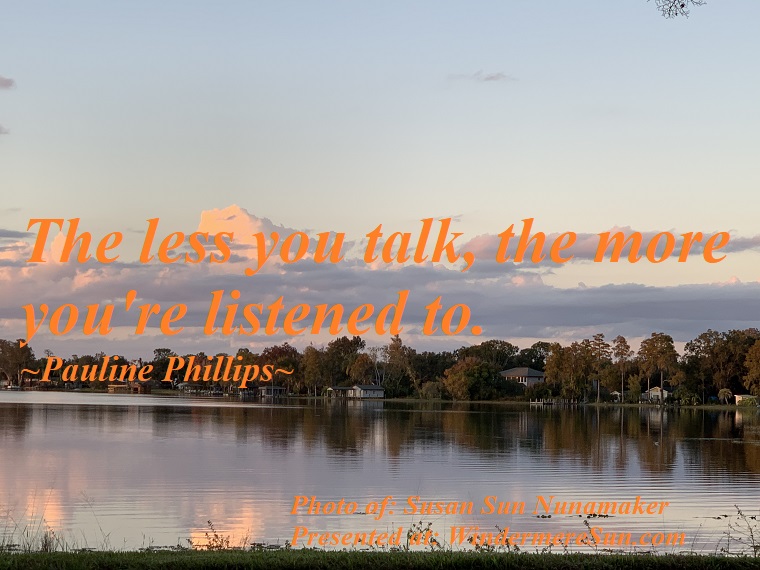 Quote of 12/28/2019, “The less you talk, the more you’re listened to.” (Quote of: Pauline Phillips, Photo of: Susan Sun Nunamaker, Presented at: WindermereSun.com) 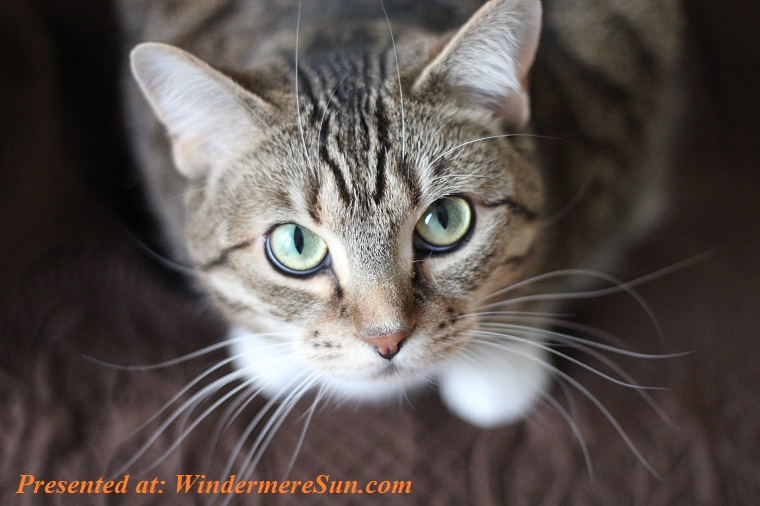 “Wow, what long whiskers you have!”

Quote of 12/28/2019, “The less you talk, the more you’re listened to.” (Quote of: Pauline Phillips, Photo of: Susan Sun Nunamaker, Presented at: WindermereSun.com)

Pauline Phillips once said, “The less you talk, the more you’re listened to.”

To find out more about Pauline Phillips, please refer to the excerpt from wikipedia, in italics, below:

Phillips’ writing career began in January 1956 when she was 37 and new to the San Francisco area. She phoned the editor of the San Francisco Chronicle and said that she could write a better advice column than the one that she had been reading in the newspaper.[7][8] After hearing her modest credentials, editor Stanleigh Arnold gave her some letters in need of answers and told her to bring back her replies in a week; Phillips got her replies back to the Chronicle in an hour and a half. In an interview with Larry King, she said that she had no work experience, lacking even a social security number. The editor, however, asked if she were a professional writer. He said that her writing was “fabulous’, and she was hired that day.[7][9]

She went by the pen name Abigail Van Buren, combining the Old Testament prophetess from 1 Samuel[3] with President Martin Van Buren.[10] Her twin sister was the author of the Ann Landers column, and the competition created bad feelings between them for many years. In 1956, Phillips offered her column to the Sioux City Journal at a reduced price, provided that the paper refuse to print her sister’s column.[6] The sisters ostensibly reconciled in 1964 but remained competitors.[11] They became “the most widely read and most quoted women in the world” in 1958, according to Life magazine.[12]

Newspapers had included gossip and personal columnists for more than a century, but the two sisters added “something special”, according to Life, in that they were the first to publish letters and replies covering a wide range of personal problems, replying with “vaudeville punch lines” rooted in common sense.[12] The editor of the Chicago Sun-Times described their skill as “beyond mere shrewdness—a quality very close to genuine wisdom.”[12]

With her comic and flinty yet fundamentally sympathetic voice, Mrs. Phillips helped wrestle the advice column from its weepy Victorian past into a hard-nosed 20th-century present.[3]

Phillips stated that she did not publish the most sensitive letters that she received, but instead replied to them individually. Sometimes she would write a brief note on the letter itself, letting one of her secretaries respond fully using her advice. If a person seemed suicidal from their letter, she would call them on the phone.[13][12]