A 1998 postage stamp on Human Rights from Faroe Islands (Presented at: WindermereSun.com) 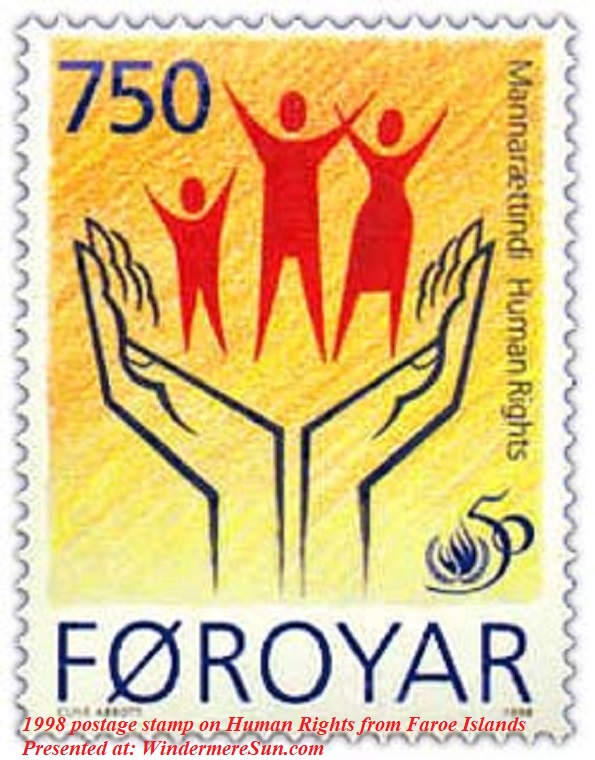 A 1998 postage stamp on Human Rights from Faroe Islands (Presented at: WindermereSun.com)

Just received  this press release, in italics, below:

December 10, 2019 marked the 71st anniversary of the adoption of the Universal Declaration of Human Rights, in the video “In Depth-Human Rights Day 2019“, below:

A bit of background history of Human Rights Day, taken from excerpt from wikipedia, in italics, below:

Human Rights Day is celebrated annually across the world on 10 December every year.

The date was chosen to honor the United Nations General Assembly‘s adoption and proclamation, on 10 December 1948, of the Universal Declaration of Human Rights (UDHR), the first global enunciation of human rights and one of the first major achievements of the new United Nations. The formal establishment of Human Rights Day occurred at the 317th Plenary Meeting of the General Assembly on 4 December 1950, when the General Assembly declared resolution 423(V), inviting all member states and any other interested organizations to celebrate the day as they saw fit.[1][2]

The day is normally marked both by high-level political conferences and meetings and by cultural events and exhibitions dealing with human rights issues. Besides, it is traditionally on 10 December that the five-yearly United Nations Prize in the Field of Human Rights and Nobel Peace Prize are awarded. Many governmental and non-governmental organizations active in the human rights field also schedule special events to commemorate the day, as do many civil and social-cause organisations.

The High Commissioner for Human Rights, as the main United Nations rights official and his Office plays a major role in coordinating efforts for the yearly observation of Human Rights Day:

Today, poverty prevails as the gravest human rights challenge in the world. Combating poverty, deprivation and exclusion is not a matter of charity, and it does not depend on how rich a country is. By tackling poverty as a matter of human rights obligation, the world will have a better chance of abolishing this scourge in our lifetime… Poverty eradication is an achievable goal.

The 60th anniversary of the Universal Declaration of Human Rights occurred on 10 December 2008, and the UN Secretary-General launched a year-long campaign leading up to this anniversary.[7] Because the UDHR holds the world record as the most translated document (except for the Bible), organizations around the globe used the year to focus on helping people everywhere learn about their rights.