Have You Seen “A Beautiful Day In The Neighborhood” About Mr. Rogers? 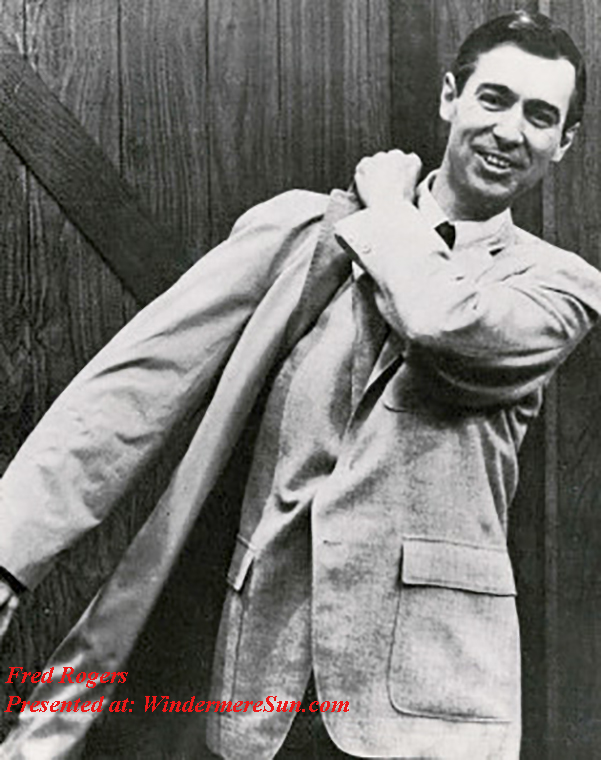 After our Thanksgiving turkey dinner, my whole family went to a neighborhood theater and watched “A Beautiful Day In The Neighborhood“, a movie about our beloved Mister Rogers, portrayed by actor Tom Hanks. In an age of automation and speed, Mister Rogers’ gentle kindness and patient compassion reminds us of the importance of one-to-one human interaction and need for compassion and forgiveness of oneself and others. Mr. Rogers makes any one he comes in contact with feeling special and accepts sadness and death as part of life. Through Tom Hanks’ portrayal of Mr. Fred Rogers, one cannot help but being compelled to feel that shared sense of humanity.  “A Beautiful Day In The Neighborhood” is a wonderful movie to be shared during this holiday season.

It’s been over 50 years since “Mister Rogers’ Neighborhood” first went on the air – a television program for young children that treated them with respect, and helped them understand a complicated, often challenging world. Faith Salie looks back on the exceptional Fred Rogers, talking with his family and collaborators, and with filmmaker Morgan Neville, director of a new documentary, “Won’t You Be My Neighbor.” in the video “Fred Rogers, our friend and neighbor“, below:

Fred Rogers was a gentle genius who knew how to make children feel good about themselves. Even after his death in February 2003, he continues to fascinate and inspire folks of all ages. Here are a few interesting facts we’ve learned about Mister Rogers since he died. For many people, the introduction to Mister Rogers’ Neighborhood is a precious childhood memory in and of itself. If you ever watched the show growing up, the thought of Fred Rogers walking through that front door is enough to fill your heart with joy. Every young fan knew what came next. He’d hang up the jacket, put on a sweater, and switch out the loafers for sneakers, all while singing about how much he appreciated his viewers. As you may already know, Rogers’ mother personally knitted his sweaters as a way of saying, “I love you.” After she died, the show’s staff purchased similar-looking sweaters and dyed them to keep the tradition going. The clothes didn’t just have sentimental value, though. According to a 2014 post on FredRogers.org, “This predictability offered a sense of security. Through your rituals and routines, you’re offering that to children, too.” And since Rogers was remarkably thoughtful, he based his routine on what viewers might expect at home. Since the show originally aired late in the afternoon, right around the time parents typically returned home from work, Rogers switched from jackets to sweaters to signify that work time was over. Similarly, putting on sneakers was meant to create a more casual atmosphere. Watch the video for more that’s Come Out About Mister Rogers Since He Died, in the video “What’s Come Out About Mister Rogers Since He Died“, below:

In an interview with Charlie Rose, Mister Rogers said, “Our society is much more interested in information than wonder, in noise rather than silence…And I feel that we need a lot more wonder and a lot more silence in our lives.” in the video “The Best of Mr. Rogers“, below:

In March 2018, the U.S. Postal Service honored Fred Rogers ’50 by producing a Forever postage stamp with his likeness. The new stamp and the 50th anniversary of the premiere of his beloved children’s show “Mister Rogers’ Neighborhood” in the U.S. provide a good excuse—if any were needed—to look back at Rogers’ memorable 2002 Dartmouth commencement address, in the video “Fred Rogers’ 2020 Dartmouth College Commencement Address“, below:

Tom talks about having a beard, “Jeopardy” contestants not knowing who he is, shooting “A Beautiful Day in the Neighborhood” in New Mexico, some of the interesting things he learned about Mister Rogers while playing him, and the power of putting on the red sweater, in the video “Tom Hanks on Becoming Mister Rogers“, below: