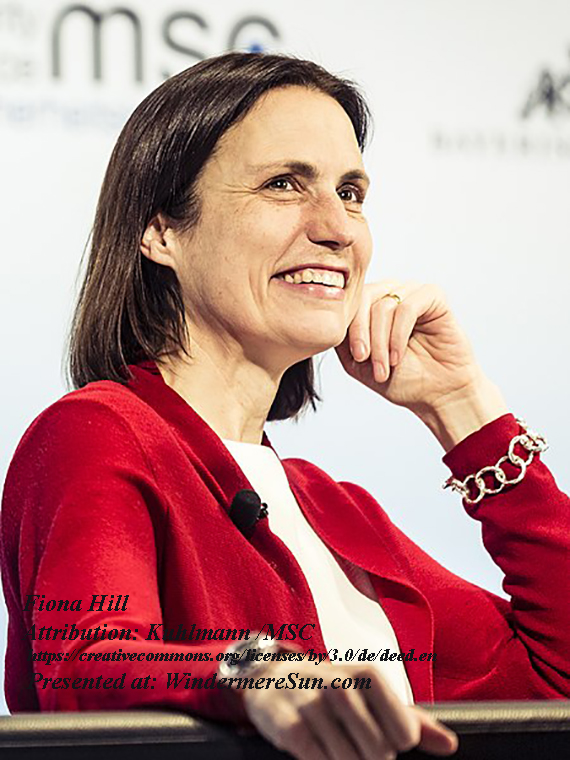 Fiona Hill, former National Security Council senior director for Europe and Russia, will testify before the House Intelligence Committee on Thursday, Nov. 21, in the impeachment probe into President Donald Trump. Hill told lawmakers in closed-door testimony last month that then-national security adviser John Bolton expressed concerns that the Trump administration was trying to pressure Ukrainian officials. The focus of the impeachment inquiry is a July 25 phone call in which Trump asked Ukraine’s president to investigate 2020 presidential candidate Joe Biden. Lawmakers are seeking answers on whether Trump tied that investigation to U.S. aid for Ukraine, in the video “WATCH: The Trump Impeachment Hearings-Day 5- Hill, Holmes to testify“, below:

The most critical statement by Fiona Hill, a former White House official has criticized politicians for advancing discredited conspiracy theories about Ukraine during impeachment hearings. ‘I refuse to be part of an effort to legitimize an alternate narrative that the Ukrainian government is a US adversary, and that Ukraine – not Russia – attacked us in 2016,’ said Fiona Hill in her opening statement. Republicans have used the hearings to push the idea that Donald Trump was rightly suspicious of Ukraine because of allegations it attempted to meddle in the 2016 election – a widely debunked claim pushed by some of Trump’s closest advisers including his personal lawyer Rudy Giuliani, in the video “Trump impeachment inquiry: Fiona Hill rebukes Republicans for ‘fictional’ Ukraine narrative“, below:

In the fifth day of public impeachment hearings, Fiona Hill, the White House’s former top Russia adviser, and David Holmes, a top staffer at the U.S. Embassy in Ukraine, told the House Intelligence Committee about their knowledge of events related to President Donald Trump’s communications with President Volodymyr Zelensky and the hold placed on vital military aid. Hill urged the lawmakers not to “let domestic politics stop us from defending ourselves from the foreign powers that truly wish us harm.” And she described her interactions with U.S. Ambassador to the European Union Gordon Sondland, whose suggestion in testimony Wednesday that he didn’t associate the Ukrainian company Burisma with Hunter Biden was “not credible,” she said. Holmes, meanwhile, described overhearing a cellphone call between Sondland and Trump, in which he says he heard the president ask about the “investigations” in relation to Ukraine, in the video “WATCH: All the key moments from Hill and Holmes’ Trump impeachment hearing 16 minutes“, below:

Attorney for Fiona Hill Lee Wolosky reacts to Hill’s testimony that closed out an intense week of impeachment hearings, in the video “The Story Behind Russia Expert Fiona Hill, Deadline, MSNBC“, below:

In a Beat special report, MSNBC Chief Legal Correspondent Ari Melber delivers the definitive report on impeachment evidence against President Trump in the historic hearings. From all witnesses confirming the Ukraine plot, to analyzing new quid pro quo bribery evidence, to why Ambassador Sondland is the “John Dean” of the Trump probe, and how these witnesses’ self-incriminating statements are more credible than past denials, which Melber explains by applying Eminem to a hearsay exception, in the video “Trump’s Nightmare’: See The New Bribery Receipts Fueling Impeachment, MSNBC“, below:

President Trump said he wants a trial in the Senate following the House impeachment inquiry hearings, in the video “Trump dares Democrats to impeach him“, below:

Any comments, suggestions, concerns regarding this post will be welcomed at info.WindermereSun[email protected]