The Most Consequential Day Of Trump’s Presidency-Gordon Sondland Testified 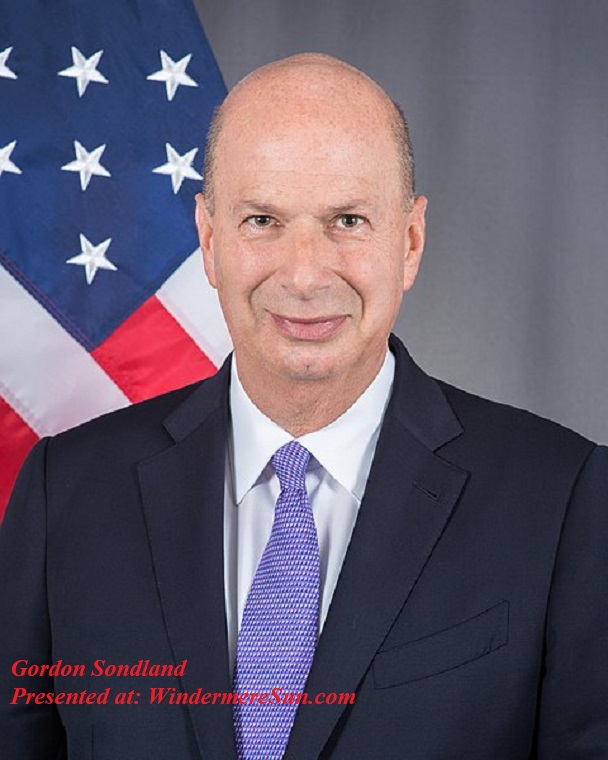 A star witness at the impeachment inquiry into Donald Trump has testified to the existence of a quid pro quo with Ukraine and insisted: ‘We followed the president’s orders.’ Gordon Sondland, the US ambassador to the European Union, said in bombshell evidence that he was forced to work with Trump’s personal lawyer, Rudy Giuliani, against his will, and criticised the White House and state department for failing to provide records. ‘Everyone was in the loop,’ Sondland testified in opening remarks. ‘It was no secret’, in the video “Trump impeachment inquiry: there was a quid pro quo in Ukraine scandal, says Sondland“, below:

Watch live analysis from The Washington Post as public hearings of the Trump impeachment inquiry continue. Gordon Sondland, the U.S. ambassador to the European Union, will testify in the morning beginning at 9 a.m. ET. David Hale, the undersecretary of state for political affairs, and Laura Cooper, deputy assistant secretary of defense for Russia, Ukraine and Eurasia, will testify in the afternoon, in the video “LIVE NOW, Public Trump impeachment hearings: Sondland, Hale and Cooper testify“, below:

Rep. Adam Schiff, the House Intelligence Committee chair, said that Gordon Sondland’s testimony was a “seminal moment in our investigation,” adding that the evidence brought forward by the U.S. ambassador to the European Union was “deeply significant and troubling.” Schiff spoke after the testimony from Sondland on Nov. 20, 2019, in a public hearing as part of the impeachment inquiry into President Donald Trump. Other government officials have testified that Sondland helped push Ukraine to investigate the 2016 elections, the Ukrainian company Burisma and the Biden family. In a July 25 call that has become the focus of the impeachment inquiry, Trump asked Zelensky to investigate former vice president and 2020 presidential candidate Joe Biden and his son, Hunter, in the video “WATCH: Rep. Schiff’s full closing statement in Gordon Sondland hearing, Trump impeachment hearings“, below:

CNN legal analyst Jeffrey Toobin reacts to US Ambassador to the European Union Gordon Sondland’s testimony in the impeachment hearings of President Donald Trump, in the video “Toobin: Most consequential day of Trump’s presidency“, below: