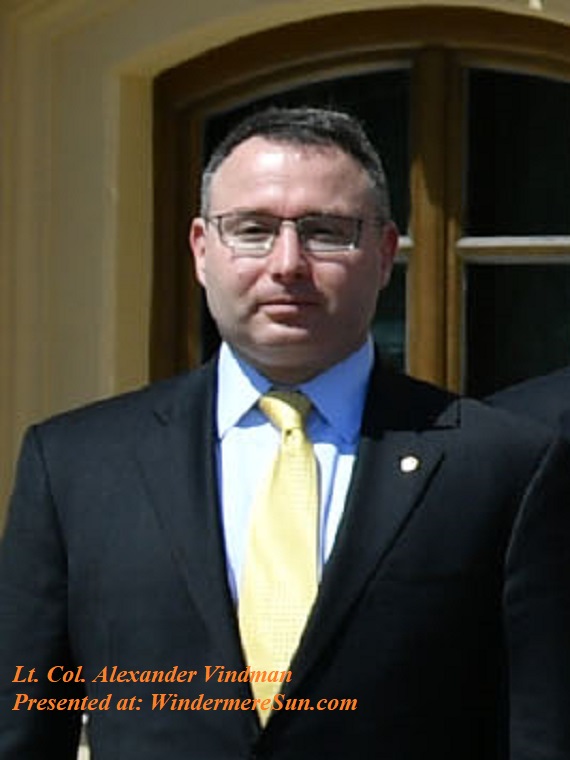 Lieutenant Colonel Alexander Vindman, who serves as the Director for European Affairs at the National Security Council, testifies in the House’s impeachment inquiry into President Donald Trump, in the video “Hear Lt. Col. Alexander Vindman’s full opening remarks“, below:

Republican counsel Stephen Castor questioned Lt. Col. Alexander Vindman, an Army officer who works for the National Security Council, and Jennifer Williams, an aide to Vice President Mike Pence, on Nov. 19, 2019, in a public hearing as part of the impeachment inquiry into President Donald Trump. Castor asked Vindman about being offered the position of Ukrainian Minister of Defense earlier this year, but the officer said he turned it down and reported the offer to his supervisors. “I’m an American. I came here when I was a toddler. I immediately dismissed these offers. … the whole notion is rather comical,” he said. Vindman and Williams both listened in on a July phone call in which Trump asked the president of Ukraine to investigate former vice president and 2020 presidential candidate Joe Biden and his son, Hunter, in the video “WATCH: Republican counsel’s full questioning of Vindman and Williams, Trump impeachment hearings“, below:

MSNBC’s Ari Melber talks about Lt. Col Alexander Vindman’s testimony at the impeachment inquiry and how his character and directness make him difficult to impune, in the video “Melber: Lt. Col. Vindman Was Most Devastating Witness As We’ve Seen To Date, MSNBC“, below:

A majority of Americans think the president’s actions with Ukraine were wrong, according to new ABC News/Ipsos polling, in the video “Majority Thinks President Donald Trump’s Actions In Ukraine Were Wrong: Poll, Morning Joe, MSNBC“, below:

Majority of Americans are in favor of impeachment and removal of Trump from the office after the public hearings so far.

Prior to Lt. Col. Alexander Vindman’s testimony, President Donald Trump’s aides have explored moving some impeachment witnesses on loan to the White House from other agencies, such as Lt. Col. Alexander Vindman, back to their home departments ahead of schedule, according to people familiar with the conversations. As public hearings bring the officials’ allegations to his television screen, Trump is asking anew how witnesses such as Vindman and Ambassador Bill Taylor came to work for him, people familiar with the matter said. He has suggested again they be dismissed, even as advisers warn him firing them could be viewed as retaliation. The possible move of officials out of the White House could still be viewed by some as evidence of retribution for their testimony. Trump’s frustration at his own officials comes as he attacks witnesses on Twitter, including during Friday’s public hearing with the ousted ambassador to Ukraine Marie Yovanovitch, in the video “Trump suggested firing impeachment witnesses“, below: