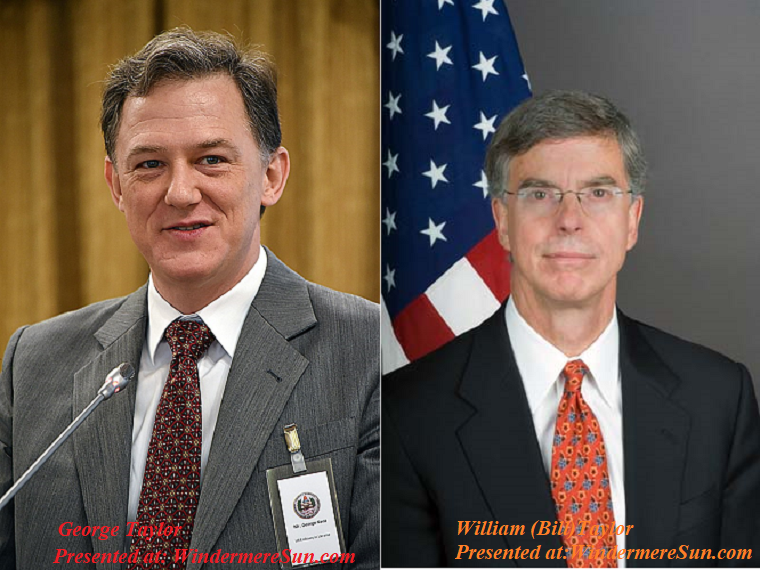 On Wednesday, November 13, 2019, 10:00 am EST, the House is holding the first public hearings of the impeachment probe, with two key diplomatic officials testifying before the House Intelligence Committee. Ambassador William (Bill) Taylor and Deputy Assistant Secretary of for European and Eurasian Affairs George Kent, two top diplomats, told the committees about concerns they raised about efforts to pressure Ukraine to announce investigations that would benefit President Trump,  in the video “Trump Impeachment hearings live: Public testimonies from Bill Taylor and George Kent“, below:

The impeachment inquiry into President Trump’s dealing with Ukraine enter a new phase on Wednesday with public hearings, in the video”Joe: This Is Not A Coup; This Is A Constitutional Process, Morning Joe, MSNBC“, below:

George Conway joins Brian Williams and Nicolle Wallace to discuss the US Constitution, President Trump and the president’s actions in regard to Ukraine. Neal Katyal joins the conversation, in the video “George Conway: I’m ‘Horrified’ And ‘Appalled’ That The GOP Has Come To This, MSNBC“, below:

Republican senators including Lindsey Graham, Chuck Grassley and Mitch McConnell have weighed in on why they won’t be watching this week’s impeachment hearings, in the video “GOP Senators Explain Why They Aren’t Watching The Hearings, Morning Joe, MSNBC“, below:

To the voters in South Carolina, Iowa, and Kentucky, I ask you “Do think these people (Lindsey Graham, Chuck Grassley, Mitch McConnell) deserve your votes?”

Keep in mind that on the eve of this historic impeachment hearing, the top impeachment investigator, Rep. Adam Schiff tells NPR there is enough evidence to impeach Trump for bribery, for abusing “official” powers of the presidency and because Trump was “offering official acts for some personal or political reason.” Former Watergate prosecutor Nick Akerman says the bribery case is a major part of “their opening statement.” Demos’ Heather McGhee says “history will be made” but it’s more than “television optics” but making the “very plain case” against Trump. Ari Melber wrote about why bribery makes a strong impeachment case on October 20th and has reported on it for weeks leading up to the public testimony, in the video “Breaking: Chairman Schiff Says Dems Can Impeach Trump For Bribery, The Beat With Ari Melber, MSNBC“, below:

Rachel Maddow shares her take on the first day of the public impeachment hearings and breaks down Trump’s impeachable offenses as well as what happens if the House of Representatives formally impeaches him, in the video “Rachel Maddow’s Takeaways from Day 1 of the Pubic Trump Impeachment Hearings“, below:

The impeachment inquiry into allegations of abuse of power by U.S. President Donald Trump begins with public hearings this week. After the first hearing on Wednesday, join us for a live Q&A with host Carole MacNeil and ask your questions about what happened and what it all means, in the video “Is it all hearsay evidence? Your impeachment hearing questions answered“, below: