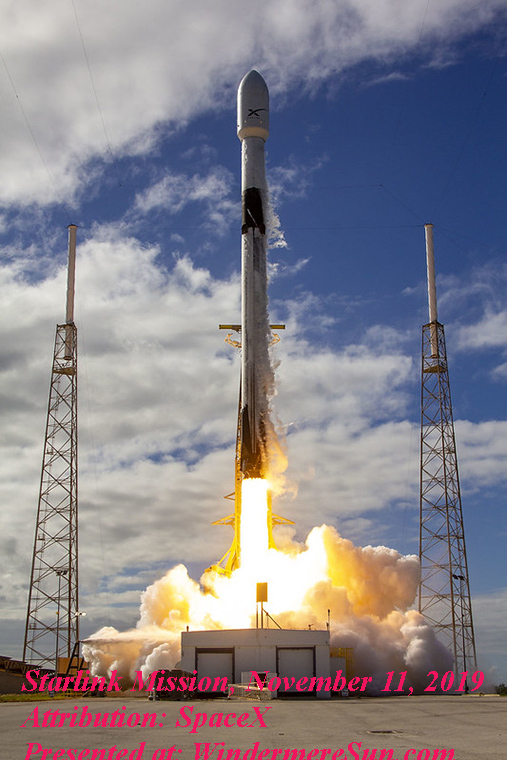 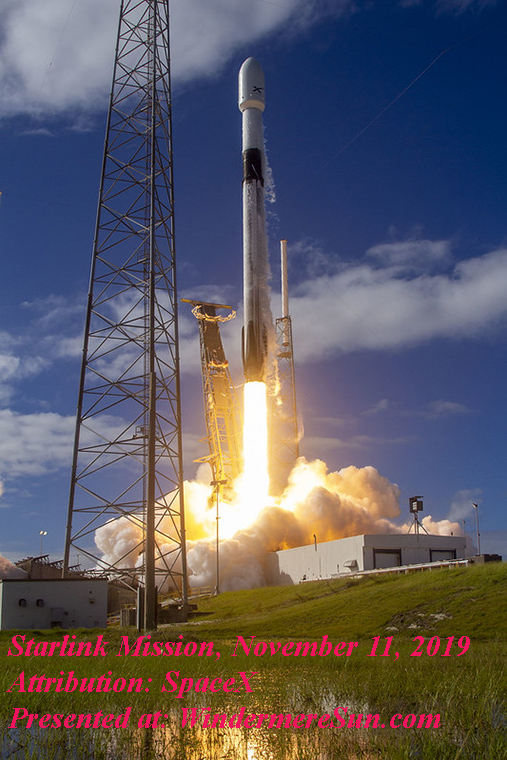 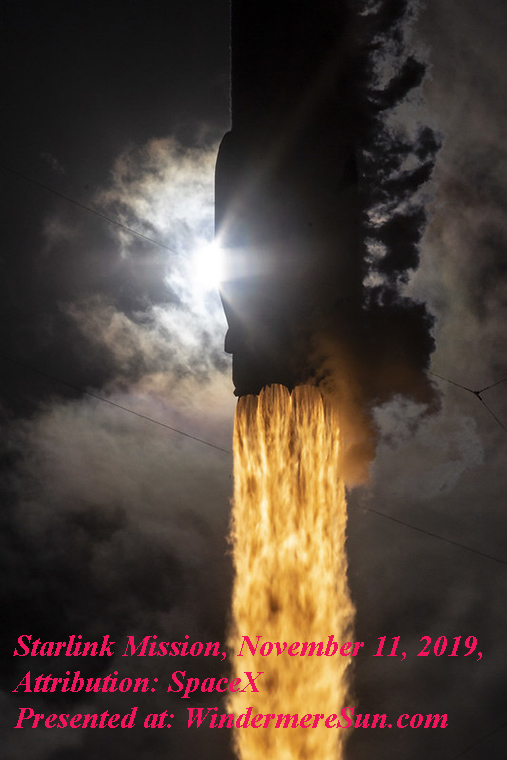 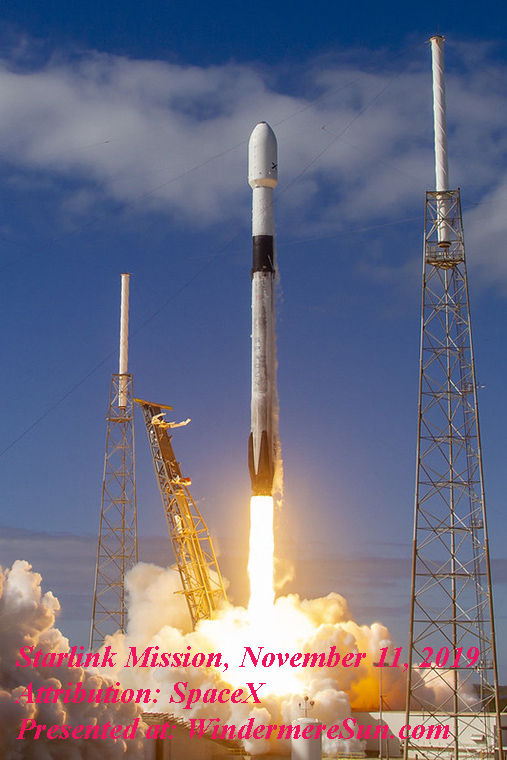 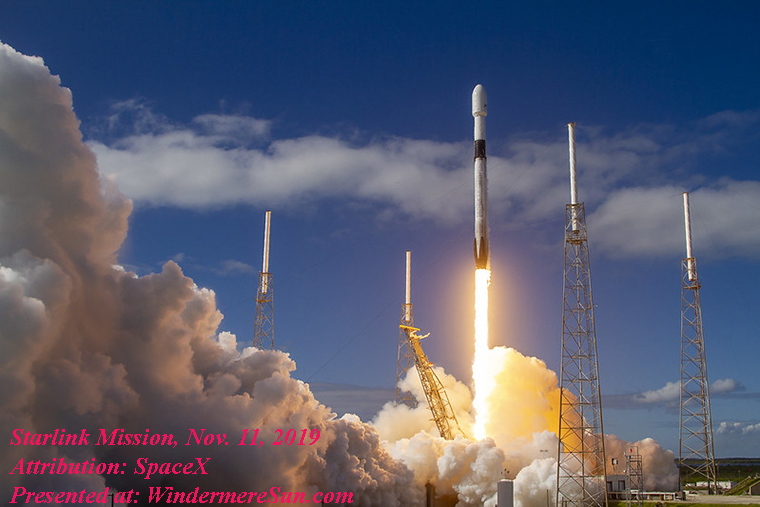 SpaceX was targeting Monday, November 11 at 9:56 a.m. EST, 14:56 UTC, for launch of 60 Starlink satellites from Space Launch Complex 40 (SLC-40) at Cape Canaveral Air Force Station, Florida. A backup launch opportunity was available at 9:34 a.m. EST, 14:34 UTC, on Tuesday, November 12. Falcon 9’s first stage supported the Iridium-7, SAOCOM-1A, and Nusantara Satu missions, and the fairing was previously flown on Falcon Heavy’s Arabsat-6A mission earlier this year. Following stage separation, SpaceX will land Falcon 9’s first stage on the “Of Course I Still Love You” droneship, which will be stationed in the Atlantic Ocean, in the videos “SpaceX launches solar-powered Starlink internet satellite into orbit” and  “Starlink Mission“, below:

Caught this pass of the Starlink satellite train from some one’s back deck, on Twitch livestream Nov 12 from Charlotte NC, in the video “Insane SpaceX Starlink Pass Nov., 12, 2019“, below:

SpaceX’s Starlink division is on track to offer satellite-broadband service in the United States in mid-2020, the company’s president and chief operating officer Gwynne Shotwell said Oct. 22. Getting there will require the company to launch six to eight batches of satellites, Shotwell told reporters during a media roundtable. SpaceX also has to finish the design and engineering of the user terminals, which is not a minor challenge, Shotwell acknowledged. SpaceX’s proposed Starlink constellation of thousands of satellites, which are designed to orbit at low altitudes above the Earth and beam internet coverage to the surface below. SpaceX CEO Elon Musk posted two tweets that show he’s testing the broadband service. Elon Musk has a Starlink terminal at his house and he used it to send a tweet early on Oct. 22. ”Sending this tweet through space via Starlink satellite,” Elon Musk tweeted to his 29 million followers. Two minutes later, Musk sent a follow-up tweet that said, “Whoa, it worked!!” In this video Engineering Today will discuss SpaceX’s plan to provide internet coverage with Starlink constellation as soon as mid-2020, in the video “SpaceX Starlink Brodband Services in Mid-2020“, below:

If and when this communication network system will have been accomplished, thanks to Elon Musk and his SpaceX, internet service potentially will be extremely inexpensive globally. Then, there will be greater transparency every where, especially benefitting less developed areas. Then majority of the satellites of our solar system will be part of this SpaceX communication network. Wow, amazingly impressive!!!

Back in May 23, 2019, SpaceX was targeting Thursday, May 23 for the launch of 60 Starlink satellites from Space Launch Complex 40 (SLC-40) at Cape Canaveral Air Force Station, Florida. SpaceX’s Starlink is a next-generation satellite network capable of connecting the globe, especially reaching those who are not yet connected, with reliable and affordable broadband internet services. The launch window opens at 10:30 p.m. EDT on May 23, or 2:30 UTC on May 24, and closes at 12:00 a.m. on May 24, or 4:00 UTC. A backup launch window opens on Friday, May 24 at 10:30 p.m. EDT, or 2:30 UTC on May 25, and closes at 12:00 a.m. on May 25, or 4:00 UTC. Falcon 9’s first stage for this mission previously supported the Telstar 18 VANTAGE mission in September 2018 and the Iridium-8 mission in January 2019. Following stage separation, SpaceX will attempt to land Falcon 9’s first stage on the “Of Course I Still Love You” droneship, which will be stationed in the Atlantic Ocean. Approximately one hour and two minutes after liftoff, the Starlink satellites will begin deployment at an altitude of 440km. They will then use onboard propulsion to reach an operational altitude of 550km, in the video “Starlink Mission“, below:

For more on Starlink, please refer to the excerpt from wikipedia, in italics, below:

Starlink is a satellite constellation being constructed by American company SpaceX[1][2] to provide satellite Internet access.[3][4] The constellation will consist of thousands of mass-produced small satellites, working in combination with ground transceivers. SpaceX also plans to sell some of the satellites for military,[5] scientific or exploratory purposes.[6]

Concerns have been raised about the long term danger of space junk resulting from placing thousands of satellites in orbits above 1000 km[10] and a possible impact on astronomy.[11]

The total cost of the decade-long project to design, build and deploy the constellation was estimated by SpaceX in May 2018 to be about US$10 billion.[12] Product development began in 2015, with the first two prototype test-flight satellites launched in February 2018. A second set of test satellites and the first large deployment of a piece of the constellation occurred on 24 May 2019 (UTC) when the first 60 operational satellites were launched.[1][13] The SpaceX satellite development facility in Redmond, Washington, houses the Starlink research, development, manufacturing and on-orbit control operations.

If and when this communication network system will have been accomplished, thanks to Elon Musk and his SpaceX, internet service potentially will be extremely inexpensive globally. Then, there will be greater transparency every where, especially benefitting less developed areas. Then majority of the satellites of our solar system will be part of this SpaceX communication network. Wow, amazingly impressive!!!