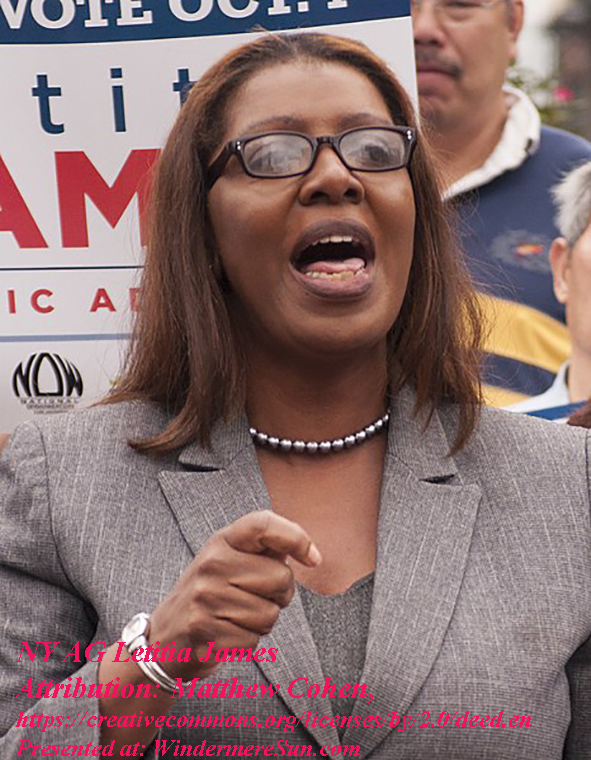 The press release of NY Attorney General Letitia James’ office on November 7, 2019, in italics, below:

As part of the settlement, Attorney General James also announced that her office entered into multiple stipulations with the Trump Foundation and its directors to resolve the remaining claims in the lawsuit. Chiefly, Mr. Trump admits to personally misusing funds at the Trump Foundation, and agrees to restrictions on future charitable service and ongoing reporting to the Office of the Attorney General in the event he creates a new charity. The settlements also include mandatory training requirements for Donald Trump Jr., Ivanka Trump, and Eric Trump. Finally, the settlements name the charities that will receive the remaining assets of the Trump Foundation as part of its dissolution.

“The Trump Foundation has shut down, funds that were illegally misused are being restored, the president will be subject to ongoing supervision by my office, and the Trump children had to undergo compulsory training to ensure this type of illegal activity never takes place again,” said Attorney General James. “The court’s decision, together with the settlements we negotiated, are a major victory in our efforts to protect charitable assets and hold accountable those who would abuse charities for personal gain. My office will continue to fight for accountability because no one is above the law — not a businessman, not a candidate for office, and not even the President of the United States.”

The lawsuit against the Donald J. Trump Foundation was filed in June 2018 — charging the Foundation’s directors with ignoring their oversight duties under New York’s charity laws and demonstrating how Mr. Trump repeatedly used Foundation money for his own personal, business, and political interests, including the unlawful coordination with his 2016 presidential campaign. In the first half of 2016 — at the height of the Republican primaries — Mr. Trump used Foundation money, raised from the public, to demonstrate his purported generosity and attract votes. Mr. Trump and his campaign doled out $500,000 at a campaign rally in the days leading up to the first primary election in the nation, the Iowa caucuses, then took credit for all $2.8 million in grants the Foundation made.

In her decision ordering Mr. Trump to pay $2 million, Justice Saliann Scarpulla said, “…Mr. Trump breached his fiduciary duty to the Foundation and that waste occurred to the Foundation. Mr. Trump’s fiduciary duty breaches included allowing his campaign to orchestrate the Fundraiser, allowing his campaign, instead of the Foundation, to direct distribution of the Funds, and using the Fundraiser and distribution of the Funds to further Mr. Trump’s political campaign.”

In total, the Office of the Attorney General has entered into four stipulation agreements as part of this settlement.

Last year, in December 2018, following a court decision in favor of the Attorney General’s Office, the first stipulation took effect when the Trump Foundation agreed to shutter its doors and dissolve under court supervision. In October 2019, the Office of the Attorney General entered three additional stipulations. One stipulation ensures that the Foundation’s remaining assets will go to reputable charities approved by Attorney General James and that have no connection to Mr. Trump or his family members. Another stipulation ensures that Donald Trump, Jr., Ivanka Trump, and Eric Trump received training on the duties of officers and directors of charities so that they cannot allow the illegal activity they oversaw at the Trump Foundation to take place again.

Mr. Trump and the Foundation have admitted key facts about their illegal political coordination with the Trump campaign, including that a purported Foundation fundraiser in January 2016 was in fact a campaign event, and that Foundation gave the Trump campaign complete control over the timing, amounts, and recipients of the $2.8 million raised through that event. Mr. Trump further admits that he and his campaign took credit for the grants that the Foundation made with funds that had been raised from the public. Justice Scarpulla noted in her decision that “Mr. Trump’s campaign, rather than the Foundation: (1) ‘planned’ and ‘organized’ the Fundraiser; and (2) ‘directed the timing, amounts, and recipients of the Foundation’s grants to charitable organizations supporting military veterans.’”

Additionally, Mr. Trump admitted a number of key facts about the other self-dealing transactions he initiated as chair — specifically, that he used Foundation funds to settle legal obligations of companies he controlled, and that the Foundation paid for a portrait of Mr. Trump that cost $10,000. As separate piece of the settlement Donald Trump Jr. reimbursed the Foundation for the cost of the portrait. The settlement also requires the Foundation to be reimbursed $11,525 for sports paraphernalia and champagne purchased at a charity gala.

Finally, the settlement agreement imposes a regime of restrictions on any future service by Mr. Trump on a charity’s board of directors, including a total ban on any self-dealing. Any charity he joins as a director must have a majority of independent directors, must engage counsel with expertise in New York not-for-profit law, and must engage the services of an accounting firm to monitor and audit the organization’s grants and expenses. If Mr. Trump forms a new charity, such an organization must comply with these requirements, and also report to the Office of the Attorney General for five years.

The $1.78 million in assets currently being held by the Trump Foundation, along with the $2 million in damages to be paid by Mr. Trump, will be disbursed equally to eight charities: Army Emergency Relief, the Children’s Aid Society, Citymeals-on-Wheels, Give an Hour, Martha’s Table, United Negro College Fund, United Way of National Capital Area, and the U.S. Holocaust Memorial Museum. The charities — which were required as part of the resolution to be entities that did not have any relationship with Mr. Trump or entities he controlled — were approved by the Office of the Attorney General and the court.