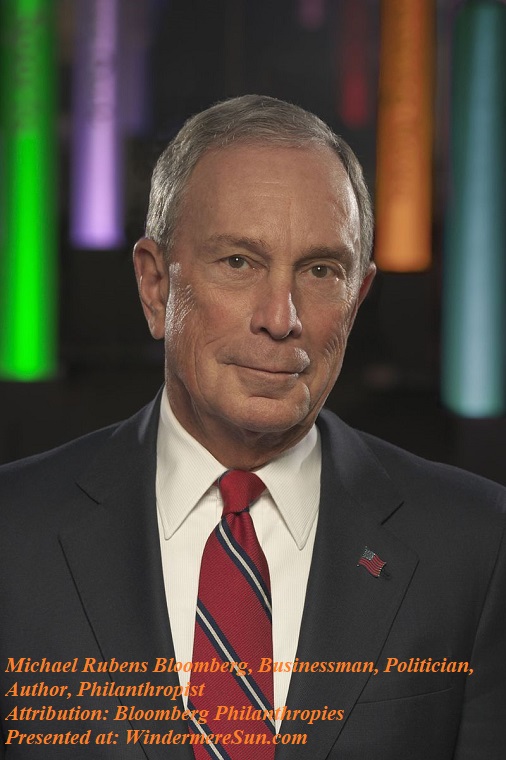 Some one sent me an interesting article today, of The New Yorker, titled Bloomberg Offers Trump Ten Billion Dollars To Leave White House By End Of Day.  I’ve also received several phone calls regarding this. But upon closer inspection, this article was actually a “Satire From The Borowitz Report“. So, dear readers, please be careful when reading these articles. Be sure to look and check if  “Satire” is any where to be seen. For Satire may simply be “the use of humor, irony, exaggeration, or ridicule to expose and criticize people’s stupidity or vices, particularly in the context of contemporary politics and other topical issues”

Although a satire such as that of The New Yorker above may be quite amusing, let’s focus on what is actually being said by Michael Bloomberg. CBS News has confirmed former New York City Mayor Michael Bloomberg is actively working to get on the 2020 ballot in at least one state. The billionaire was asked about a possible run last week by “Face the Nation” moderator Margaret Brennan. He said “nothing’s changed” since he put out a statement in March outlining why he wasn’t running for president, Brennan joins “CBS This Morning” to discuss 2020, the impeachment inquiry into President Trump, and “Face the Nation’s” 65th anniversary, in the video “How Michael Bloomberg is trying to shape Democratic agenda“, below:

Former New York City Mayor Michael Bloomberg is already revealing a willingness to break from the Democratic pack, as he takes a step to run for president. And would-be Democratic opponents believe Bloomberg should spend his billions some other way. Ed O’Keefe reports in the video “Bloomberg doesn’t get warm welcome from other Dems“, below:

Another billionaire is set to seek the Democratic presidential nomination – as the billionaire class lashes out at Elizabeth Warren and Bernie Sanders, in the video “Michael Bloomberg Moves To Enter Presidential Race, All In,MSNBC“, below:

Sources close to the New York billionaire said he’s considering a 2020 run, while Donald Trump said Bloomberg didn’t have the “magic to do well.” in the video “Trump remarks on Michael Bloomberg entering presidential race“, below:

Former NYC Mayor Mike Bloomberg appears to be actively preparing to jump into the 2020 Democratic race, starting with filing to run in Alabama. The panel discusses, in the video “Michael Bloomberg Sizes Up A 2020 Run, Morning Joe, MSNBC“, below: