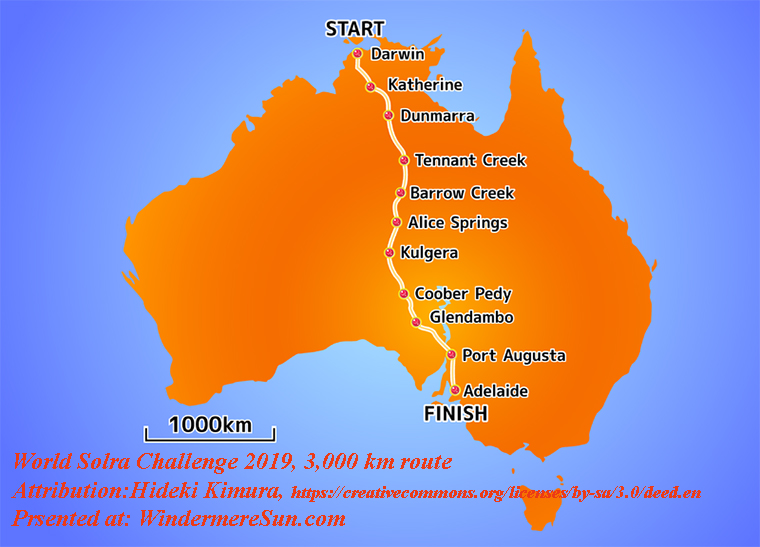 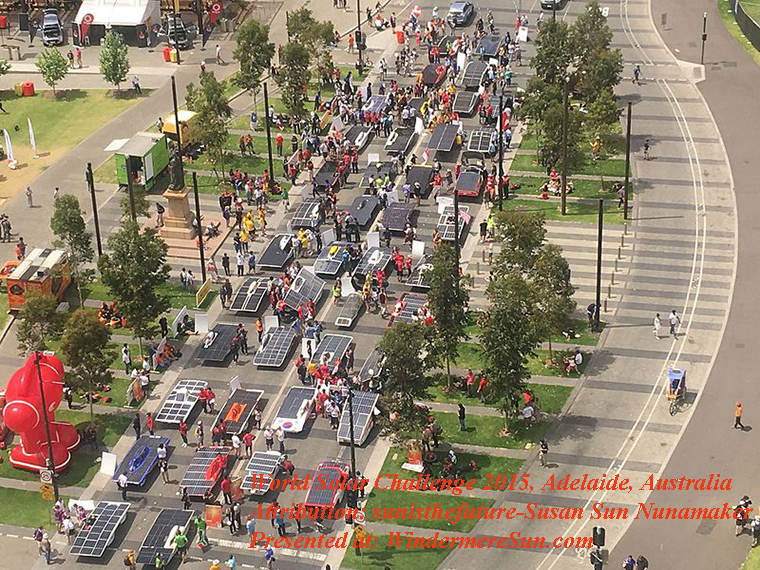 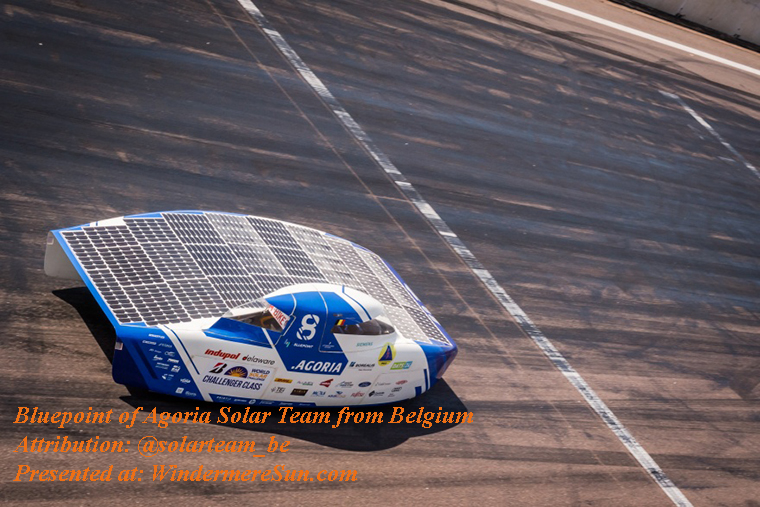 Bluepoint of Agoria Solar Team from Belgium. came in 1st in Challenger Class of BWSC2019 (Attribution: @solarteam_be, Presented at: WindermereSun.com) 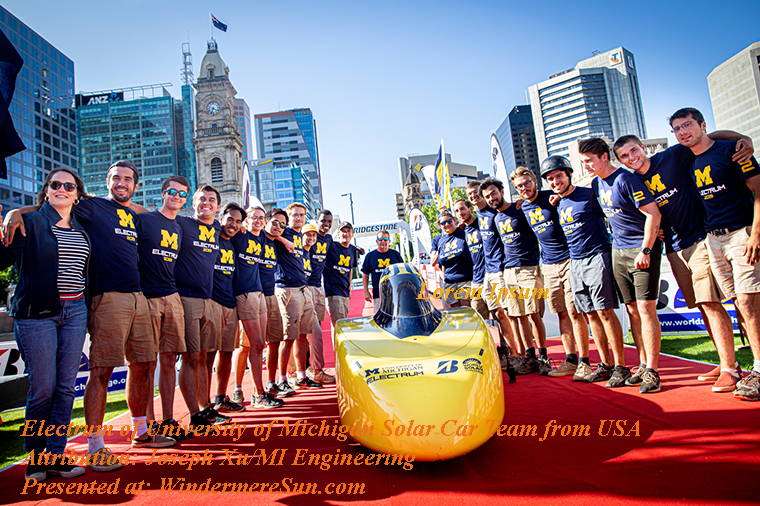 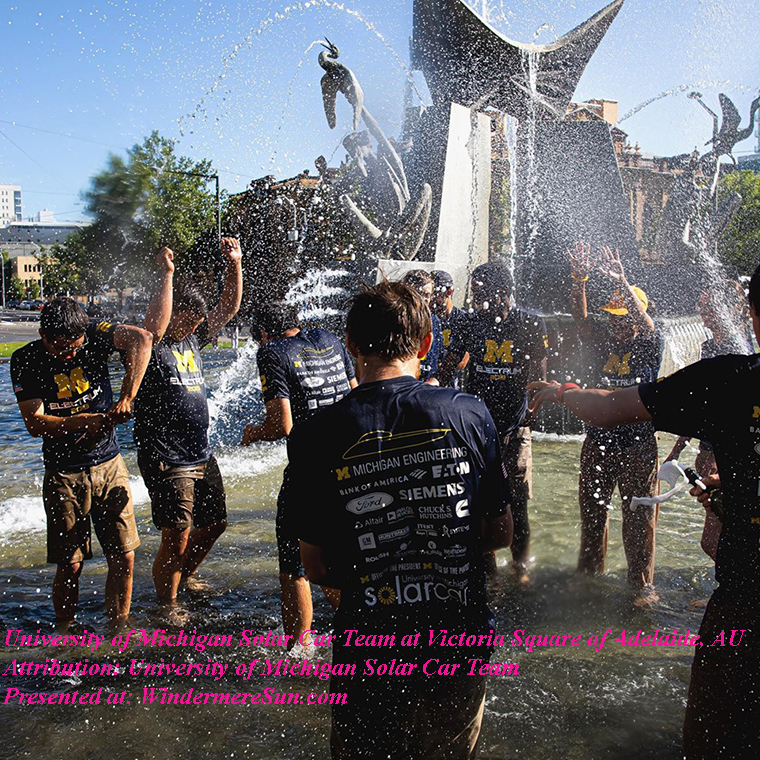 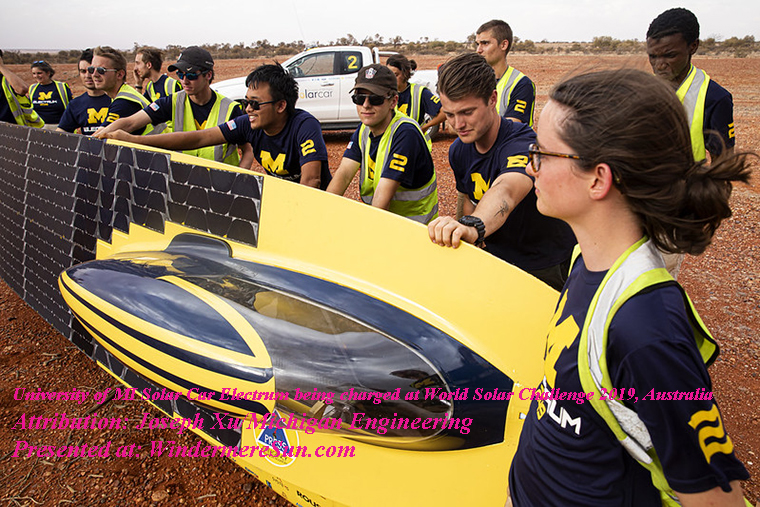 The U-M Solar Car Team’s competition car charges at the end of the day as the team ends just inside of the South Australia region at the end of the third day of the Bridgestone World Solar Car Challenge in Australia on October 15, 2019. (Photo Attribution: Joseph Xu/Michigan Engineering, Presented at: WindermereSun.com) 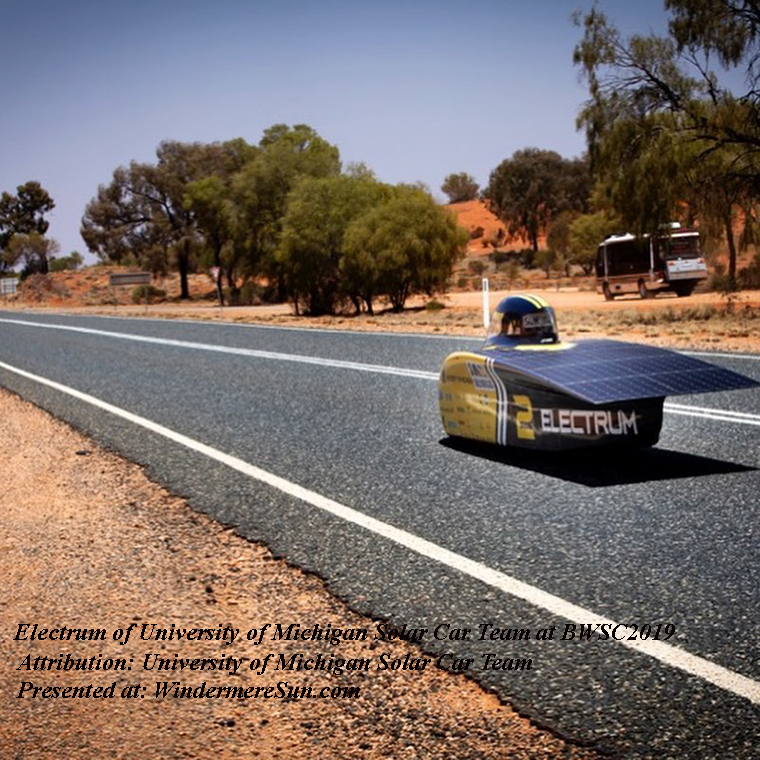 Many of us who have been concerned about Climate Change, Solar Energy, and Future Vehicle development, have been attending the event World Solar Challenge that occurs once every other year in Australia. With over 53 teams from 24 countries (with qualified teams from these countries: Australia, USA, Netherlands, Belgium, Chile, Singapore, Italy, Japan, Germany, United Kingdom, Malaysia, Sweden, Hong Kong, Switzerland, Poland, Thailand, Canada, China, South Korea, Turkey, Saudi Arabia), each with their very own custom built solar vehicle  built to specific regulations, traveling 3,000 kms through the center of Australia (from Darwin-Katherine-Dunmarra-Tennant Creek-Barrow Creek-Alice Springs-Kulgera-Coober Pedy-Glendambo-Port Augusta-Adelaide), many solar and car enthusiasts from different parts of the planet earth have been involved in making Bridgestone World Solar Challenge 2019 or BWSC2019 (October 13-October 20, 2019) a reality.

There are two classes of solar cars in BWSC2019: Challenger Class & Cruiser Class. The result of BWSC2019:

From Darwin to Adelaide, by sun power, in the video “Bridgestone World Solar Challenge 2019“, below:

Solar Team Eindhoven finishes after a six-day and 3022-kilometer journey from North to South Australia with the highest efficiency score, in the video “The finish of the Bridgestone World Solar Challenge 2019“, below:

We appreciate all of these young people for all of their time, energy, and enthusiasm in the designing, building, and racing of these solar cars. Through them, we can believe and see our sunny Solar Future!

For more about World Solar Challenge, please refer to the excerpt from wikipedia page, in italics, below:

The World Solar Challenge (WSC), or the Bridgestone World Solar Challenge since 2013, tied to the sponsorship of Bridgestone Corporation[1] is the world’s most well-known solar-powered car race event. A biennial road race covering 3,022 km (1,878 mi) through the Australian Outback, from Darwin, Northern Territory, to Adelaide, South Australia, created to foster the development of experimental, solar-powered vehicles.[2]

The race attracts teams from around the world, most of which are fielded by universities or corporations, although some are fielded by high schools. The race has a 32-year history spanning fifteen races, with the inaugural event taking place in 1987. Initially held once every three years, the event became biennial from the turn of the century.

Since 2001 the World Solar Challenge was won seven times out of nine efforts by the Nuna team and cars of the Delft University of Technology from the Netherlands, with only the Tokai Challenger, built by the Tokai University of Japan able to take the crown in 2009 and 2011.

Starting in 2007, the WSC has been raced in multiple classes. After the German team of Bochum University of Applied Sciences competed with a four-wheeled, multi-seat car, the BoCruiser (in 2009), in 2013 a radically new “Cruiser Class” was introduced, racing and stimulating the technological development of practically usable, and ideally road-legal, multi-seater solar vehicles. Since its inception, Solar Team Eindhoven’s four- and five-seat Stella solar cars from Eindhoven University of Technology (Netherlands) won the Cruiser Class in all three races sofar.

Remarkable technological progress has been achieved since the GM led, highly experimental, single-seat Sunraycer prototype first won the WSC with an average speed of 66.9 km/h (41.6 mph). Once competing cars became steadily more capable to match or exceed legal maximum speeds on the Australian highway, the race rules were consistently made more demanding and challenging — for instance after Honda‘s Dreamcar first won the race with an average speed exceeding 55 mph (88.5 km/h) in 1996. In 2005 the Dutch Nuna team were the first to beat an average speed of 100 km/h (62 mph).

The 2017 Cruiser class winner, the five-seat Stella Vie vehicle, was able to carry an average of 3.4 occupants at an average speed of 69 km/h (43 mph). Like its two predecessors, the 2017 Stella Vie vehicle was successfully road registered by the Dutch team, further emphasizing the great progress in real world compliance and practicality that has been achieved.[3][4]

The objective of this competition is to promote research on solar-powered cars. Teams from universities and enterprises participate. In 2015, 43 teams from 23 countries competed in the race.[5]

Efficient balancing of power resources and power consumption is the key to success during the race. At any moment in time the optimal driving speed depends on the weather forecast and the remaining capacity of the batteries. The team members in the escort cars will continuously remotely retrieve data from the solar car about its condition and use these data as input for prior developed computer programs to work out the best driving strategy.

It is equally important to charge the batteries as much as possible in periods of daylight when the car is not racing. To capture as much solar energy as possible, the solar panels are generally directed such that these are perpendicular to the incident sun rays. Sometimes the whole solar array is tilted for this purpose.

The idea for the competition originates from Danish-born adventurer Hans Tholstrup.[6][7] He was the first to circumnavigate the Australian continent in a 16-foot (4.9 m) open boat. At a later stage in his life he became involved in various competitions with fuel saving cars and trucks. Already in the 1980s, he became aware of the necessity to explore sustainable energy as a replacement for the limited available fossil fuel. Sponsored by BP, he designed the world’s first solar car, called The Quiet Achiever, and traversed the 4,052 km (2,518 mi) between Sydney, New South Wales and Perth, Western Australia in 20 days. That was the precursor of the World Solar Challenge.

After the 4th race, he sold the rights to the state of South Australia and leadership of the race was assumed by Chris Selwood.

The race was held every three years until 1999 when it was switched to every two years.

Again, allow me to reiterate: We appreciate all of these young people for all of their time, energy, and enthusiasm in the designing, building, and racing of these solar cars. Through them, we can believe and see our sunny Solar Future!