Mick Mulvaney Said, “Get Over It”, With Respect To Quid Pro Quo 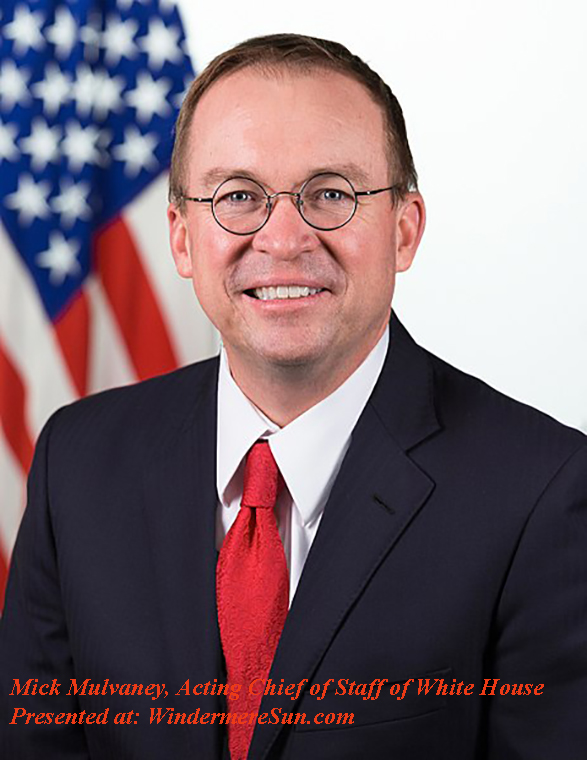 It is amazing that the Trump Administration personnel would openly admit to the corruption and impeachable high crimes and misdemeanors, followed by the comment, “Get over it!” as though corruption via quid pro quo committed openly would be acceptable. This is definitely the weakest moment of this presidency. This is the third offense for impeachment, with respect to the emoluments clause.

In the 39-minute press conference, White House acting chief of staff Mick Mulvaney made a stunning admission by confirming that President Donald Trump froze nearly $400 million in US security aid to Ukraine in part to pressure that country into investigating Democrats, in the video “White House admits quid pro quo over Ukraine aid“, below:

In a press briefing, Mick Mulvaney said that Trump froze US military aid because he wanted an investigation involving a DNC server and the 2016 campaign, undercutting the President’s denial of a quid pro quo with Ukraine. Later, Mulvaney tried to take it all back. In a new statement he said, “There never was any condition on the flow of the aid related to the matter of the DNC server.” in the video “Mulvaney: Tries To Walks Back That Trump Held Up Ukraine Aid For Political Reason, Hardball, MSNBC“, below:

CNN’s Erin Burnett calls acting White House chief of staff Mick Mulvaney’s press conference “baffling” after he admitted to a quid pro quo over Ukraine aid. She outlines previous statements from President Donald Trump’s administration that denied any quid pro quo. Mulvaney later tried to walk back the claim, in the video “Mulvaney contradicted by his own words, Erin Burnett“, below:

Rachel Maddow joins to discuss Mick Mulvaney seeming to admit that there was indeed a quid pro quo floated at Ukraine by Trump’s White House… before Mulvaney tried to walk those comments back, in the video “Maddow On Trump White House: It Feels Like The Wheels Are Coming Off, The 11th Hour, MSNBC” below:.

Mick Mulvaney confirmed that military aid to Ukraine was held up as Trump pushed Ukraine to pursue political investigations. Trump officials are reportedly furious with Mulvaney’s admission, in the video “W.H. Chief Of Staff Admits ‘We Held Up The Money’ TO Ukraine, The Last Word, MSNBC“, below:

Rep. Denny Heck tells Lawrence O’Donnell that Gordon Sondland and the other impeachment witnesses are providing new information to the impeachment committees that’s given them a different perspective on the Trump-Ukraine scandal. Lawrence also discusses with Amb. Wendy Sherman and Neal Katyal, in the video “Intelligence Cmte:Each And Every Impeachment Witness ‘Brings New Insights’, The Last Word, MSNBC“, below:

It is clear that President Donald Trump’s defense is completely blown.