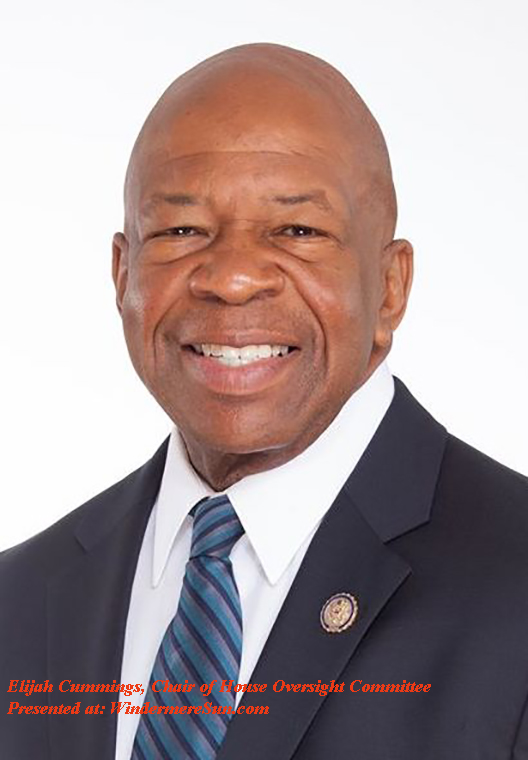 Today, Thursday, October 17, 2019, at 2:45 am, America has lost one of its treasures, Elijah E. Cummings, the first African American Speaker pro tempore. Cummings was a Baltimore attorney and civil rights advocate who served in Maryland’s legislature before representing the state in the U.S. House, where he led the investigation of President Trump as the Chair of the House Oversight Committee.

Congressman Elijah Cummings, Chair of the House Oversight Committee, passed away at Johns Hopkins hospital on Thursday, October 17, 2019, due to complications concerning longstanding health challenges, in the video “Rep. Elijah Cummings died at 68“, below:

The new chair of the House Oversight and Reform Committee tells 60 Minutes he’ll have to hit the ground “flying” with majority power to investigate the Trump administration. See the full interview here, in the video “Elijah Cummings talks to 60 Minutes in first interview as House Oversight Committee chairman“, below:

For more about Elijah Cummings, please refer to the excerpt from wikipedia, in italics, below:

Elijah Eugene Cummings (January 18, 1951 – October 17, 2019) was an American politician and the member of the U.S. House of Representatives for Maryland’s 7th congressional district.[1] The district includes just over half of Baltimore City, most of the majority-black precincts of Baltimore County, as well as most of Howard County. He previously served in the Maryland House of Delegates. He was a member of the Democratic Party and chair of the Committee on Oversight and Reform.

Cummings was born on January 18, 1951 in Baltimore, the son of Ruth Elma (née Cochran) and Robert Cummings.[2] He was the third child of seven. Cummings graduated with honors from the Baltimore City College high school in 1969.[3][4] He later attended Howard University in Washington, D.C.,[4] where he served in the student government as sophomore class president, student government treasurer and later student government president. He became a member of the Phi Beta Kappa Society[5] and graduated in 1973 with a Bachelor‘s degree in Political Science.[4][6]

Cummings graduated from law school at the University of Maryland School of Law, receiving his J.D. in 1976, and was admitted to the Maryland Bar later that year.[7] He practiced law for 19 years before first being elected to the House in the 1996 elections.[8]

Cummings received 12 honorary doctoral degrees from universities across America, most recently an honorary doctorate of public service from the University of Maryland, College Park in 2017.[9][10]

For 14 years, Cummings served in the Maryland House of Delegates. His predecessor, Lena King Lee, raised funds and campaigned for him; years later, Cummings credited her with launching his political career.[11][12] In the Maryland General Assembly, he served as Chairman of the Legislative Black Caucus of Maryland and was the first African American in Maryland history to be named Speaker Pro Tempore,[13] the second highest position in the House of Delegates.

Cummings introduced the Presidential and Federal Records Act Amendments of 2014, a bipartisan bill signed into law by President Barack Obama in December 2014. The bill, which Cummings cosponsored with Representative Darrell Issa, Republican of California, is a set of amendments to the Federal Records Act and Presidential Records Act. Among other provisions, the bill modernizes the definition of a federal record to expressly include electronic documents.[24][25]

He supported the Smart Savings Act, a bill that would make the default investment in the Thrift Savings Plan (TSP) an age-appropriate target date asset allocation investment fund (L Fund) instead of the Government Securities Investment Fund (G Fund).[26] Cummings called the bill a “commonsense change” and argued that the bill “will enable workers to take full advantage of a diversified fund designed to yield higher returns”.[27]

He introduced the All Circuit Review Extension Act, a bill that would extend for three years the authority for federal employees who appeal a judgment of the Merit Systems Protection Board (MSPB) to file their appeal at any federal circuit court of appeals, instead of only the U.S. Court of Appeals for the DC Circuit.[28] Cummings said that this program is important to extend because it “allows whistleblowers to file appeals where they live rather than being limited to the Federal Circuit Court of Appeals”.[29] He also said that the Federal Circuit Court of Appeals has “an abysmal track record in whistleblower cases”.[29]

In remarks at the 2016 Democratic National Convention, Cummings declared: “Our party does not just believe, but understands, that Black Lives Matter. But we also recognize that our community and our law enforcement work best when they work together.”[30][31]

Five-term Congressman for Maryland’s 7th congressional district, Kweisi Mfume resigned in February 1996 to take the presidency of the NAACP. Cummings won a crowded[32] seven-way Democratic primary—the real contest in this heavily Democratic, black-majority district—with 37.5% of the vote. In the special election, he defeated Republican Kenneth Kondner with over 80 percent of the vote. He defeated Kondner again in November by a similar margin to win the seat in his own right.

He has been reelected 11 more times since then, never dropping below 69 percent of the vote, and even ran unopposed in 2006.

Cummings served on numerous Maryland boards and commissions including the Board of Visitors to the United States Naval Academy and the Elijah Cummings Youth Program in Israel. He was an honorary member of the Baltimore Zoo Board of Trustees.[35]

In addition to his many speaking engagements, he wrote a biweekly column for the Baltimore Afro-American newspaper. He lived in the Madison Park community in Baltimore and was an active member of the New Psalmist Baptist Church.

He was married to Maya Rockeymoore Cummings, who was elected chairwoman of the Maryland Democratic Party in December 2018.[36] They had three children.[37]

In June 2011, his nephew Christopher Cummings, son of his brother James, was murdered at his off-campus house near Old Dominion University in Norfolk, Virginia, where he was a student.[38]

Cummings underwent surgery to repair his aortic valve in May 2017 and was absent from Capitol Hill for two months. In July 2017, he developed a surgery-related infection but returned to work.[39] On October 17, 2019, Cummings died at Johns Hopkins Hospitals, from “complications concerning his longstanding health challenges.”[40]