A 13th century Belgium manuscript illustrating the dialogue/debate between the jew "Moyses" and the Christian "Petrus". This is a photograph of an exhibit at the Diaspora Museum, Tel Aviv (Presented at: WindermereSun.com) 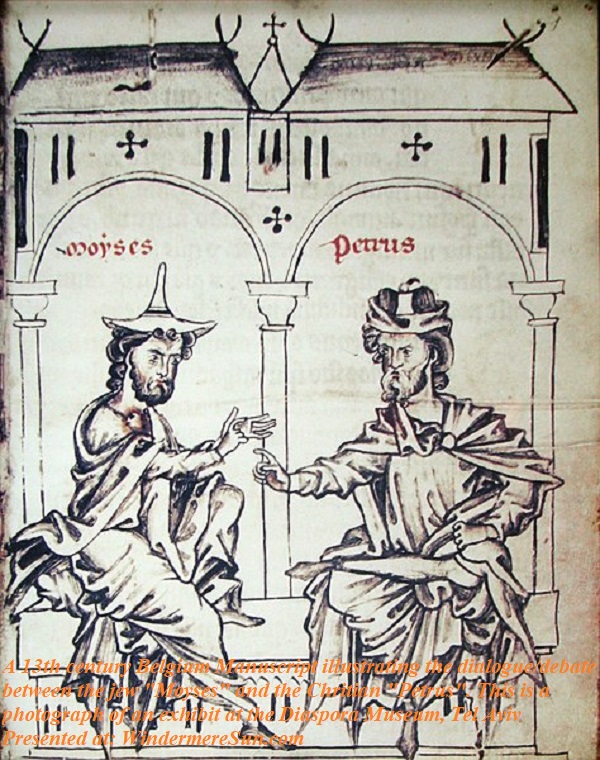 A 13th century Belgium manuscript illustrating the dialogue/debate between the jew “Moyses” and the Christian “Petrus”. This is a photograph of an exhibit at the Diaspora Museum, Tel Aviv (Presented at: WindermereSun.com)

Mark your calendar for the next Democratic Presidential Candidates’ Debate on Tuesday, October 15, 2109, at 8:00 pm EDT, at Otterbein University, in the Columbus, OH suburb of Westerville. There will be 12 Democratic presidential hopefuls (Amy Klobuchar, Andrew Yang, Bernie Sanders, Beto O’Rourke, Cory Booker, Elizabeth Warren, Joe Biden, Julian Castro, Kamala Harris, Pete Buttigieg, Tom Steyer, Tulsi Gabbard) at the debate, broadcasted by CNN and hosted by The New York Times. In order to participate in this debate, the Democratic candidate had to have raised donations from 130,000 people and earn at least 2% support in four polls approved by the Democratic National Convention between June 28 and October 1, 2019, in order to secure a spot.

Be sure to watch and learn more about these presidential candidates.

As responsible adult American citizens, we all need to vote. But it is also important for us to insist on the security of the election process. At this point, not all 50 states have secure process. To see how all 50 states’ voting equipment usage, please click HERE.  “DRE without paper trail” is not secure. More than 10 states do not have secure voting process. We need to secure all 50 states’ election equipments and process in addition to encourage election turnouts in order to truly secure the election.

The candidate with the most interesting idea, Freedom Dividend, giving $1000 per month to every American adult, no question asked, in Andrew Yang. Entrepreneur, first-time politician and Democratic presidential candidate Andrew Yang will be among the 12 contenders on stage at the Democratic Party debate in Westerville, Ohio, on October 15. Nicholas Thompson, the editor-in-chief of Wired, sits down with Yang to talk about his longshot campaign, universal basic income, and our nation’s economic transformation, and why he feels he is the ideal candidate for the job, in the video “Andrew Yang on jobs, income, and his unlikely campaign“, below:

In the video “9 Democratic candidate participation in LGBTQ town hall“, below:

In the video “Otterbein University readies for Democratic debate spotlifht“, below: