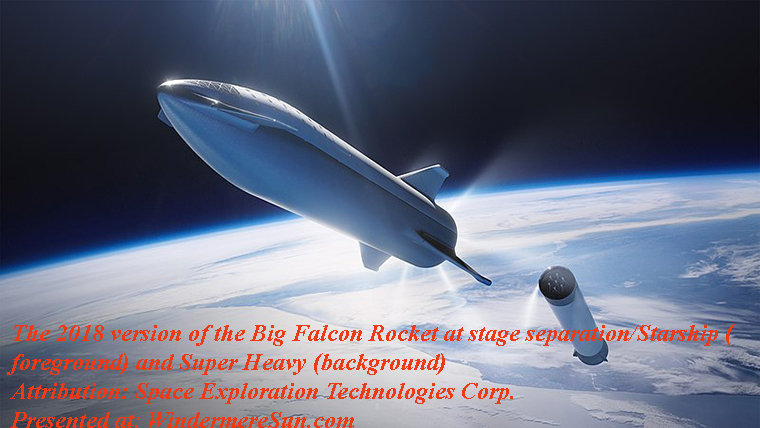 SpaceX has been building the first Starship prototype in Boca Chica, Texas for the last several months. On the 11th Anniversary of the first Falcon 1 rocket getting into orbit, Elon Musk presents his vision for the short term future of the Starship program that his company is developing, in the video “Elon Musk’s Starship Announcement in 8 Minutes, SpaceX“, below:

Today we are going to take a dive into the important facts and figures from Elon Musks 2019 Presentation last Saturday, September 28, 2019. This SpaceX Starship update was epic and we’ll also cover over a little news of the week. Now there is actually a huge amount to break down here even after all of the information shared the previous week as Starship was being assembled for the presentation. So what have we learned over the last week and why is there so much excitement of this amazing vessel? In the video “SpaceX Starship update-Elon Musk 2019 Presentation Analysis and News“, below:

Tesla CEO Elon Musk unveiled SpaceX’s “Starship” prototype over the weekend. Its purpose? To launch humans to the moon — and even to Mars. Musk said his newest stainless-steel spaceship could go to orbit as early as next year. CBS News space consultant Bill Harwood joins CBSN with more, in the video “Elon Musk unveils new stainless-steel “Starship” prototype“, below:

Please refer to the excerpt from wikipedia on SpaceX Starship, in italics, below:

The SpaceX Starship is a fully reusable second stage and space vehicle being privately[12] developed by SpaceX. It is being designed to be a long-duration cargo– and passenger-carrying spacecraft.[13] While it is being used today as an independent rocket for testing, it will typically be used on orbital launches with an additional booster stage, the Super Heavy, where Starship serves as the second stage on a two-stage-to-orbit launch vehicle.[14] The combination of spacecraft and booster is called Starship as well.[15] Beginning in mid-2019, prototype versions are being flown with Starship as an independent rocket in its own right—without any launch vehicle booster stage at all—as part of an extensive suborbital flight testing program to get launch and landing working and iterate on a variety of design details, particularly with respect to atmospheric reentry of the vehicle.[16][12][17][18]

Integrated system testing of Starship began in March 2019 with the addition of a single Raptor rocket engine to the first flight-capable propellant structure, Starhopper. Starhopper was used through August 2019 for static testing and low-altitude, low-velocity flight testing of vertical launches and landings[19] in July/August. Two additional test articles, Starship orbital prototypes, are being built by competing teams in Texas and in Florida. They are planned to be used for high-altitude, high-velocity testing beginning in late 2019. All test articles have a 9-meter (30 ft)-diameter stainless steel hull.

SpaceX is planning to launch commercial payloads using Starship no earlier than 2021.[20]

Elon Musk unveiled his brand new SpaceX Starship – designed to make private round-trips to the Moon, Mars and beyond. The craft – which is due to make its first test launch in just weeks – is built to carry crew and cargo deep into space and then return to Earth. SpaceX CEO Elon Musk said the Starship will ultimately pave the way for a sustainable city to be built on Mars. A prototype of SpaceX’s Starship was shown at the company’s Texas launch facility. The tech billionaire revealed his ambition to have the ship launched in just the month or two, in the video “Elon Musk unveils SpaceX Starship for private round-trips to Moon and Mars“, below: