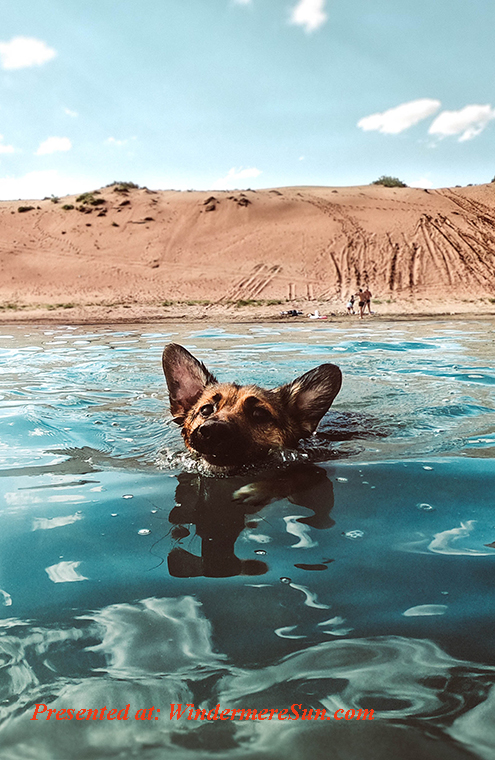 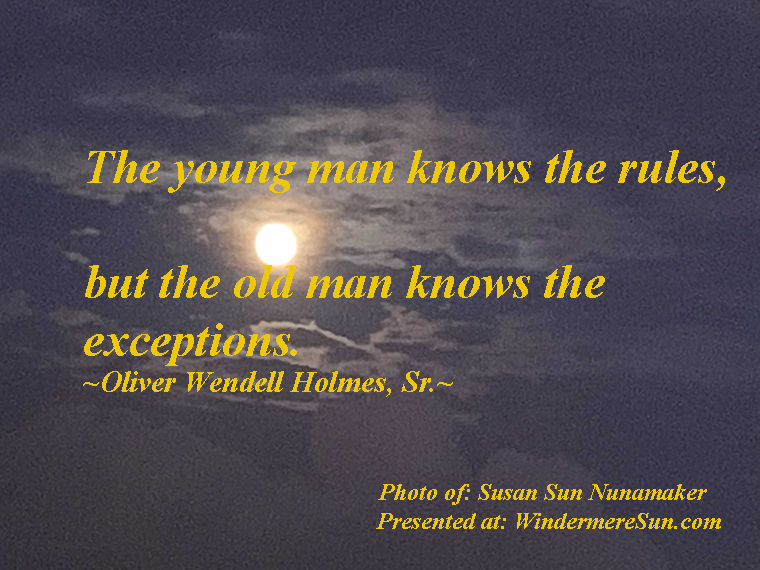 Quote of 9/28/2019, “The young man knows the rules, but the old man knows the exceptions.” (Quote of Oliver Wendell Holmes, Sr., Photo of Susan Sun Nunamaker, Presented at: WindermereSun.com)

What a beautiful swimmer!

Quote of 9/28/2019, “The young man knows the rules, but the old man knows the exceptions.” (Quote of Oliver Wendell Holmes, Sr., Photo of Susan Sun Nunamaker, Presented at: WindermereSun.com)

To find out more about Oliver Wendell Holmes, Sr., please refer to the excerpt from wikipedia, in italics, below:

Oliver Wendell Holmes ( August 29, 1809 – October 7, 1894) was an American physician, poet, and polymath based in Boston. A member of the Fireside Poets, he was acclaimed by his peers as one of the best writers of the day. His most famous prose works are the “Breakfast-Table” series, which began with The Autocrat of the Breakfast-Table (1858). He was also an important medical reformer. In addition to his work as an author and poet, Holmes also served as a physician, professor, lecturer and inventor and, although he never practiced it, he received formal training in law.

Born in Cambridge, Massachusetts, Holmes was educated at Phillips Academy and Harvard College. After graduating from Harvard in 1829, he briefly studied law before turning to the medical profession. He began writing poetry at an early age; one of his most famous works, “Old Ironsides“, was published in 1830 and was influential in the eventual preservation of the USS Constitution. Following training at the prestigious medical schools of Paris, Holmes was granted his Doctor of Medicine degree from Harvard Medical School in 1836. He taught at Dartmouth Medical School before returning to teach at Harvard and, for a time, served as dean there. During his long professorship, he became an advocate for various medical reforms and notably posited the controversial idea that doctors were capable of carrying puerperal fever from patient to patient. Holmes retired from Harvard in 1882 and continued writing poetry, novels and essays until his death in 1894.

Surrounded by Boston’s literary elite—which included friends such as Ralph Waldo Emerson, Henry Wadsworth Longfellow, and James Russell Lowell—Holmes made an indelible imprint on the literary world of the 19th century. Many of his works were published in The Atlantic Monthly, a magazine that he named. For his literary achievements and other accomplishments, he was awarded numerous honorary degrees from universities around the world. Holmes’s writing often commemorated his native Boston area, and much of it was meant to be humorous or conversational. Some of his medical writings, notably his 1843 essay regarding the contagiousness of puerperal fever, were considered innovative for their time. He was often called upon to issue occasional poetry, or poems written specifically for an event, including many occasions at Harvard. Holmes also popularized several terms, including Boston Brahmin and anesthesia. He was the father of Justice Oliver Wendell Holmes Jr. of the Supreme Court of the United States.