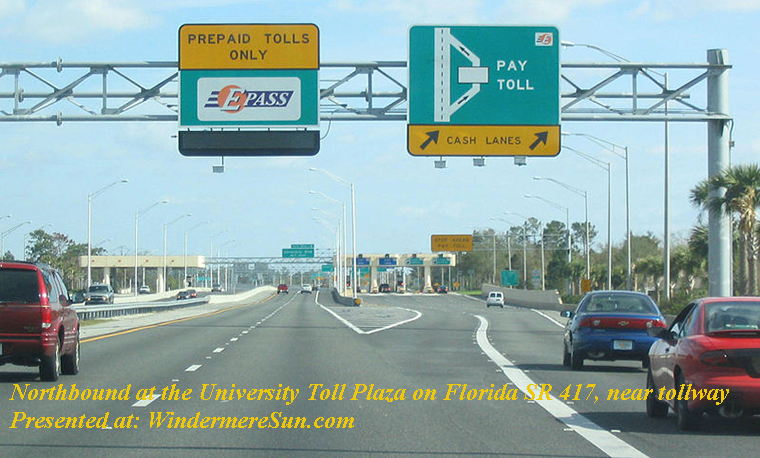 Tollway: Northbound at the University Toll Plaza on Florida SR 417 (Presented at: WindermereSun.com)

On Friday, September 20, 2019, the Florida Department of Transportation announced its “request for information”, a first step in contracting for the back-office services. The announcement noted that the agency was looking for vendors with experience in processing complex transactions and account management systems. This Friday news release noted that the turnpike processes 4 to 5 million toll transactions per day and the new back-office system is expected to manage 9 million SunPass accounts and more than 12 million “toll-by-plate” accounts. This announcement came after Wednesday, September 18, 2019, when Florida Turnpike Enterprise Executive Director Nicola Liquori gave the Florida House Transportation and Infrastructure subcommittee an update regarding the SunPass debacle regarding Conduent’s botched system.

In this video below, Liquori confirms that the state could lose as much as $50 million in unpaid tolls, in the video “Tens of millions of SunPass toll dollars on the table“, below:

Liquori told members of the House of Transportation & Infrastructure Subcommittee, “We realize that we tripped a little bit, but we’re moving forward and we’re looking at ways to enhance our customer-facing tools to make that a better product for them.” She said that the toll-by-plate system, which was used to bill motorists that travel through collection points without SunPass transponders, had a backlog of about $120 million and 50%-60% may not be recovered, even with the efforts of collection agencies.

Florida will not renew its contract with the company behind the SunPass tolling system takeover disaster that has now caused more than a year’s worth of problems, an FDOT spokesperson confirmed, in the video “Florida Department of Transportation ends contract with company blamed for SunPass issues“, below:

Last year, the Florida’s botched SunPass rollout was estimated to potentially cost the state more than $50 million in unpaid tolls. Complaints were rolling  in from customers who thought SunPass was over billing them. Some were able to check their accounts, others like Shannon Carson were not, in the video “SunPass customers in the dark about toll charges“, below:

In April or 2019, many drivers who received outrageous turnpike toll bills were later seeing those invoice totals go down, but they said the math didn’t quite add up either way, in the video “Drivers say adjusted SunPass toll-by-plate bills just don’t add up“, below:

Moral of the story: it is always a good idea to implement the new system while still keeping the old system in place during the initial testing period.