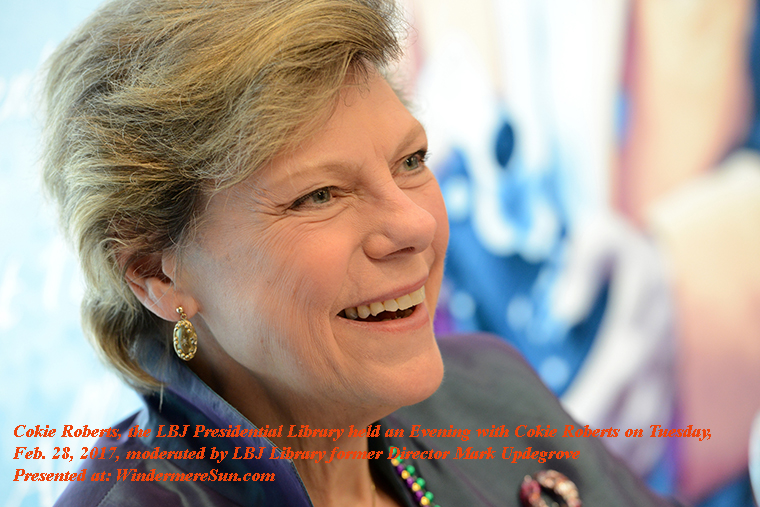 The legendary journalist and political commentator Cokie Roberts passed away today, September 17, 2019, at age 75, from complication from breast cancer, in the video “Honoring Cokie Roberts“, below:

Cokie Roberts embodied journalist integrity and was a fierce promoter of women and equality. Roberts wrote about why women have always inspired her and how she would like to be remembered, in the video “Cokie Roberts: In her own words“, below:

An excerpt from wikipedia, on Cokie Roberts, in italics, below:

Roberts, along with her husband, Steven V. Roberts, wrote a weekly column syndicated by United Media in newspapers around the United States. She served on the boards of several non-profit organizations such as the Kaiser Family Foundation[3] and was appointed by President George W. Bush to his Council on Service and Civic Participation.[4]

After she graduated from Wellesley College in 1964, where she received a BA in Political Science[9] her first job in journalism was at WRC-TV in Washington, DC, where she was host of its weekly public affairs program Meeting of the Minds.[10][11] After moving with her husband to New York City, she found work in 1967 as a reporter for Cowles Communications.[10] She worked briefly as a producer for WNEW-TV before her husband’s career relocated them to Los Angeles, where she worked for Altman Productions, then for KNBC-TV as producer of the children’s program Seredipity.[10] She moved with her husband to Greece, where she was a stringer for CBS News in Athens.[10]

Roberts began working for NPR in 1978, where she was the congressional correspondent for more than ten years.[12] Roberts was a contributor to PBS in the evening television news program The MacNeil/Lehrer NewsHour. Her coverage of the Iran-Contra Affair for that program won her the Edward Weintal Prize for Diplomatic Reporting in 1988.[13] From 1981 to 1984, in addition to her work at NPR, she also co-hosted The Lawmakers, a weekly public television program on Congress.[14]

While working in Guatemala in 1989, Sister Dianna Ortiz, a Catholic nun from New Mexico, was abducted, raped, and tortured by members of a government-backed death squad, who believed she was a subversive.[15] During a subsequent interview, Roberts contested Ortiz’s claim that an American was among her captors. (The United States provided significant military aid to Guatemala at the time.) Roberts implied that Ortiz was lying about the entire episode, although Ortiz later won a lawsuit against a Guatemalan general she accused in the case.[16]

Starting in 1992, Roberts served as a senior news analyst and commentator for NPR, primarily on the daily news program Morning Edition.[17] Roberts was the co-anchor of the ABC News’ Sunday morning broadcast, This Week with Sam Donaldson & Cokie Roberts from 1996 to 2002, while serving as the chief congressional analyst for ABC News.[18] She covered politics, Congress, and public policy, reporting for World News Tonight and other ABC News broadcasts.[19] Her final assignment with NPR was a series of segments on Morning Edition titled “Ask Cokie”, in which she answered questions submitted by listeners about subjects usually related to U.S. politics.[20]

Roberts won the Edward R. Murrow Award,[21] the Everett McKinley Dirksen Award for coverage of Congress[22] and a 1991 Emmy Award for her contribution to “Who is Ross Perot?”[23] In 2000, Roberts won the Walter Cronkite Award for Excellence in Journalism.[24]

She and her mother, Lindy Boggs, won the Foremother Award from the National Center for Health Research in 2013.[25]

Roberts was inducted into the Broadcasting & Cable Hall of Fame in 2000.[26][27] She was also cited as one of the fifty greatest women in the history of broadcasting by the American Women in Radio and Television.[23]

Roberts was a president of the Radio and Television Correspondents’ Association.[11]

She was married to Steven V. Roberts, a professor and fellow journalist, from 1966 until her death. They met in the summer of 1962, when she was 18 and he was 19.[28] They resided in Bethesda, Maryland.[29] She and her husband had two children. Their daughter Rebecca Roberts is also a journalist and was one of the hosts of POTUS ’08 on XM Radio.[30]