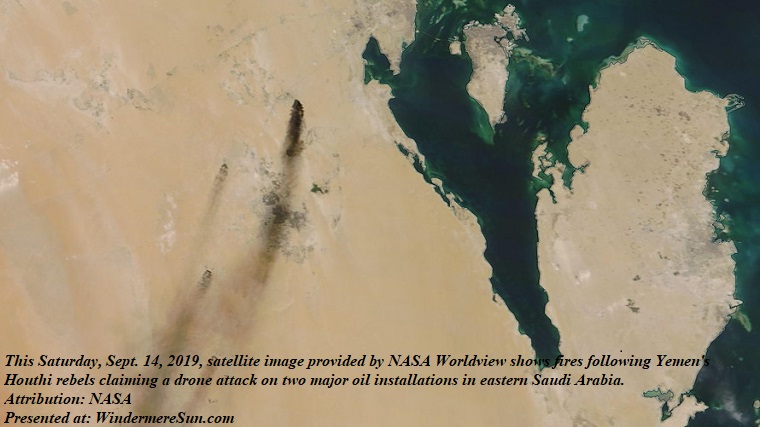 More than 20 drones attacked world’s largest oil processing facility in eastern Saudi Arabia accounting for nearly 10 million barrels of crude-oil production, sparking massive fires and plumes of black smoke emanating from the oil field on Saturday, September 14, 2019 . This could lead to about 50% of its production being at least temporarily thrown offline.

In the video “Saudi Arabia’s oil output decimated by drone attack“, below:

Secretary of State Mike Pompeo said he believes Iran is behind the drone attack on the world’s largest oil refinery, in the video “Questions raised about whether Iran is to blame for Saudi Arabia attack“, below:

This would potentially translate into higher prices at the pump here in USA. Currently S&P Global Platts is forecasting $5or $10 per barrel spike in Brent oil prices.

CNN’s Anderson Cooper discusses the threat President Donald Trump directed at Iran over the suspicion that the country is behind the attack on Saudi Arabia’s oil facilities, in the video “Anderson Cooper shows how Trump contradicts himself on Iran“, below: