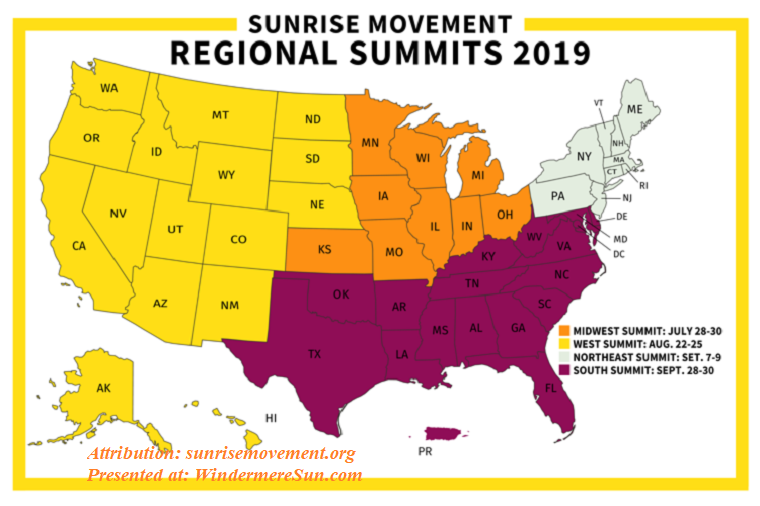 Among the many messages  I receive this morning, one of which came from a 13 year old of Sunrise Movement shared below:

So, please allow me to share some information about this Sunrise Movement, from an excerpt of wikipedia, in italics, below:

Sunrise Movement is an American youth-led political movement coordinated by Sunrise, a 501(c)(4) political action organization that advocates political action on climate change. When first incorporated in 2017, the group’s goal was to elect proponents of renewable energy in the 2018 midterm elections,[2] first in the Democratic primaries and then in the general election. After the election, the organization has been focused on gaining a consensus within the Democratic Party in support of an environmental program known as the Green New Deal.

Together with Justice Democrats and Alexandria Ocasio-Cortez, the group organized a sit-in in the office of Nancy Pelosi, which brought Sunrise its first significant press coverage.[3] Sunrise organized a similar event in February 2019, bringing a group of young people to confront Senator Dianne Feinstein in her office.

In the summer of 2013, Evan Weber, Matthew Lichtash, and environmentalist Michael K. Dorsey used a $30,000 grant plus free office space provided by the Sierra Club and the Wesleyan University Green Fund to draft an ambitious plan for climate action, which was the basis for the incorporation of the US Climate Plan 501(c)(3) nonprofit (aka Sunrise Movement Education Fund) incorporated in January 2014.[1]

Sara Blazevic and Varshini Prakash started the Sunrise Movement on the East Coast in 2015. Blazevic, Prakash, and other early leaders trained at Momentum, an organization that teaches community organizing.[4]

The Sunrise Movement launched as a 501(c)(4) in 2017.[2] During the 2018 midterms, they worked to oust candidates who would not refuse funding from the fossil fuel industry and to elect proponents of renewable energy.[1] Half of the group’s first 20 endorsements won their elections. Deb Haaland, Alexandria Ocasio-Cortez, Rashida Tlaib, and Ilhan Omar won election to the House of Representatives and six other endorsed candidates won election to state house or senate seats in Florida, New York and Pennsylvania.[5]

After the 2018 elections, the Sunrise Movement has focused on the climate change proposals collectively known as the Green New Deal, whose core principles have been described as “decarbonization, jobs, and justice.”[3] Its proposals include a transition to renewable energy, expanded public transportation, and an economic plan to drive job growth. Several publications have reported that the Green New Deal opposes nuclear power and carbon capture as well as some other technologies.[6][7] However, Senator Ed Markey, the co-sponsor of the Green New Deal resolution in the United States senate, stated that the resolution’s language is technology-agnostic and does not exclude nuclear power or carbon capture.[8]

In March 2019, a group of activists in the UK called on the Labour party to commit to taking radical steps to decarbonise the UK economy within a decade. Calling their movement “Labour for a Green New Deal, a group spokesperson said they got their inspiration from the Sunrise Movement and the work that Ocasio-Cortez has done in the US. Group members have met with Zack Exley, co-founder of the progressive group Justice Democrats, to learn from the experiences that he and Ocasio-Cortez have had in working for the Green New Deal campaign in the US.[9]

Some of the Activities of the Sunrise Movement, listed in italics, below:

After taking control of the House of Representatives in the 2018 midterm elections, Democrats disagreed about the best way to address climate change with legislation.[10] Sunrise planned a sit-in in Pelosi’s office and asked Representative-elect Alexandria Ocasio-Cortez to help them publicize the event, which instead she decided to join herself.[3][11] The sit-in demands were that all members of the Democratic leadership in the House would refuse donations from the fossil fuel industry, and that Pelosi work to build consensus in the House over Green New Deal legislation to be passed when Democrats regain control of government.[12] The latter would be accomplished by a “Committee on a Green New Deal”. The sit-in took place on November 13. Over two hundred and fifty protesters showed up to occupy Pelosi’s office, with fifty-one being arrested by Capitol Police.[12][13] Representative Rashida Tlaib voiced support for the protest over social media.[12] Representative Pelosi responded by welcoming the protest over Twitter, offering to reinstate the Committee on the Climate Crisis and noting that the already-promised infrastructure bill could address many of the Sunrise Movement’s concerns.[13]

One major goal has been to create a select committee on the Green New Deal, a plan opposed by some in the Democratic House leadership.[14]

The Sunrise Movement continued to campaign for House members to sign onto the plan to create a select committee for the green new deal, as opposed to simply resurrecting the old committee. On December 10, they staged a second sit-in at the offices of Nancy Pelosi and Jim McGovern. Over 1000 protesters showed up.[15][16] By December 19, 40 members of Congress had signed on to support the creation of the committee.[3]

Instead, Speaker Pelosi and Majority Leader Steny Hoyer decided to recreate the Committee on the Climate Crisis, appointing Representative Kathy Castor as chair.[3]

In February 2019, several San Francisco Bay Area children along with their adult sponsors met with Senator Feinstein to urge her to vote to support Green New Deal legislation. Feinstein told the children that she is working on an alternative bill, and that she could not support the proposed legislation which she believes is “unworkable” and has no chance of passing the Republican-controlled Senate. However, she allowed that she might vote for it as a symbolic gesture. The Sunrise Movement shared a video of the interaction, shortened so that it “focused on clips of the most tense moments” via social media and on its website. The shortened version has been viewed more than three million times.[17][18] Sunrise also later posted the longer, unedited video on Facebook, resulting in controversy over whether the short version emphasized scenes intended to make Feinstein appear less sympathetic to the viewer.[19] Senator Feinstein characterized the discussion as “spirited”, while the executive director of the Sunrise movement said that Feinstein’s treatment of the students was evidence that the Democratic Party required “fundamental change”.[20] 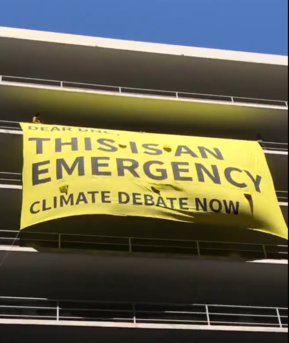 Banner dropped by the Sunrise Movement on August 23rd across from the DNC meeting.

In early 2019, the Sunrise Movement defined one of its major goals as pressuring the DNC to hold a single-issue presidential debate on climate change.[21] The DNC currently bars candidates from participating in outside debates (defined as multiple candidates on stage interacting with each other) but has no policy regarding participating in outside forums and town halls.[22]

On June 26, 2019, Sunrise Movement activists slept on the steps of the DNC office in Washington, D.C. to protest the lack of focus of the Democratic primary debates on the climate crisis, and to call a focused debate on Climate Change.[23] On July 25, CNN and MSNBC announced they would be hosting a climate change Town Hall and Forum respectively.[24] On August 22, the DNC Resolutions Committee voted 8-17 against hosting a DNC presidential climate change debate.[25] During the session a resolution was passed to allow multiple candidates to appear on a stage together at a climate change town hall or forum. However, in the breakout session on August 24 that resolution was voted down 222-137, with the DNC chair voting no.[26]

So, if you go to: sunrisemovement.org/summit

You will find various Summit meetings, with the upcoming September 28-30 in Nashville, TN.

The summit will be an opportunity to meet other hub members from around the region and build community across the movement. Attendees will be trained in Sunrise’s DNA as well as attend specialized breakout trainings on communications strategy, action planning, fundraising, building partnerships, and other core skills to build out powerful hubs.

THE SUNRISE IS COMING

Climate change isn’t going to avert itself. We know what it’s going to take: dramatic and immediate action. Looking at history, we know that change like that takes mass movements, so we’re building one.

That’s why we’re hosting four regional summits, to train a generation of activists to fight for our future. Find the right summit for you, and then join the movement.