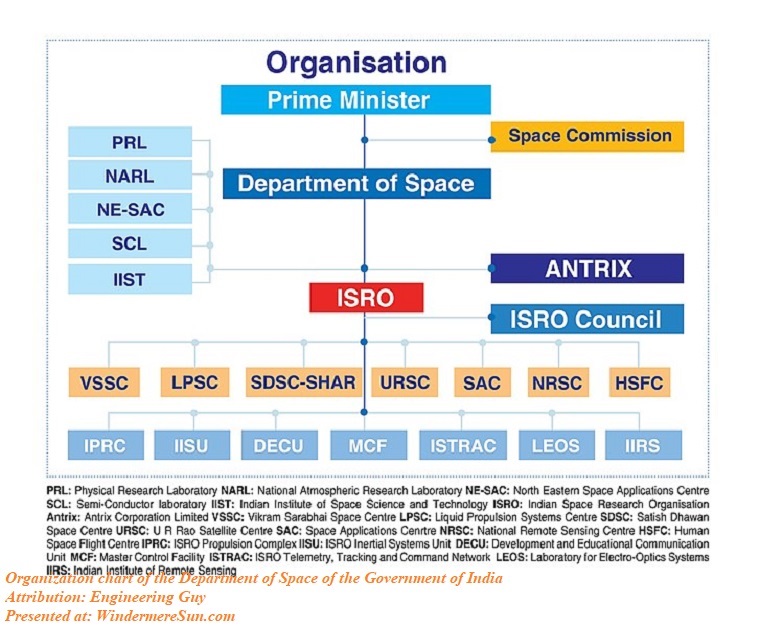 Organization chart of Department of Space of the Government of India (Attributioin: Engineering Guy, Presented at: WindermereSun.com)

India was hoping to become the fourth nation (USA, China, Russia were the other three nations) to soft-land on the moon with their Chandrayaan-2 space mission. But their space agency, ISRO (Indian Space Research Organization), lost communication with their lander just before the mission was complete. Undoubtedly, the ISRO will learn much from this experience and will continue their efforts in becoming the fourth nation to land on the moon in the future.

The video “ISRO-CHANDRAYAAN 2 (3D Animation)“, below:

The Indian Space Research Organization announced, on Saturday, September 7, 2019, that the mission control had lost contact with the Chandrayaan-2 lander, minutes before it was scheduled to land on the south pole of the moon, in the video “India Loses Contact With Moon Probe Amid Fear Mission Failed“, below:

ChaIndia’s hopes for its Vikram lunar lander to make a soft landing on the moon were all but dashed when ground control lost the craft’s signal. India’s Prime Minister Narendra Modi told scientists he was “immensely proud” of their unsuccessful attempt to complete the country’s first soft moon landing. It’s not known if the unmanned lunar lander crashed or suffered a technical fault. Al Jazeera’s Anchal Vohra reports from New Delhi, India, in the video “India’s spacecraft Vikram fails moon landing“, below:

Prime Minister Narendra Modi comforts scientists and a stunned nation from the lunar program’s command center in Bangalore, saying India was “proud” and clasping the visibly emotional mission chief in a lengthy hug, in the video “Indian PM Modi Consoles Scientists After Moon-Lander Loses Contact“, below:

The Indian space agency lost communication with its Chandrayaan-2 lunar mission two days ago, the chairman of the Indian Space Research Organisation said, in the video “India loses contact with Chandrayaan=2 moon mission“, below:

After a journey of more than 50 days, India’s Chandrayaan-2 was attempting to land on the moon’s unexplored south pole, in the video “India attempts historic moon landing“, below:

I am a mother/wife/daughter, math professor, solar advocate, world traveler, yogi, artist, photographer, sharer of knowledge/information, and resident of Windermere, FL. I've worked professionally in applied math, engineering, medical research, and as a university math professor in IL and FL for about 20 years. My husband and I loved Disney and moved down to Central Florida initially as snowbirds. But we've come to love the warmth and friendly people offered by this community and decided to move down to Windermere, FL full time in 2006. I am now spending time sharing information/ knowledge online, promoting understanding of math and solar energy (via http://www.sunisthefuture.net ), and developing Windermere Sun (http://www.WindermereSun.com) as an online publication, sharing and promoting Community ABC's (Activities-Businesses-Collaborations) for healthier/happier/more sustainable living. In the following posts, I'll be sharing with you some of the reasons why Windermere has attracted us to become full-time residents of Central Florida region. Please feel free to leave your comments via email at "Contact Us" in the topbar above or via info.Windermere[email protected] ~Let's help one another~ Windermere Sun-Susan Sun Nunamaker Founder/Owner/Editor/Producer of Windermere Sun email: [email protected] Twitter: @WindermereSun