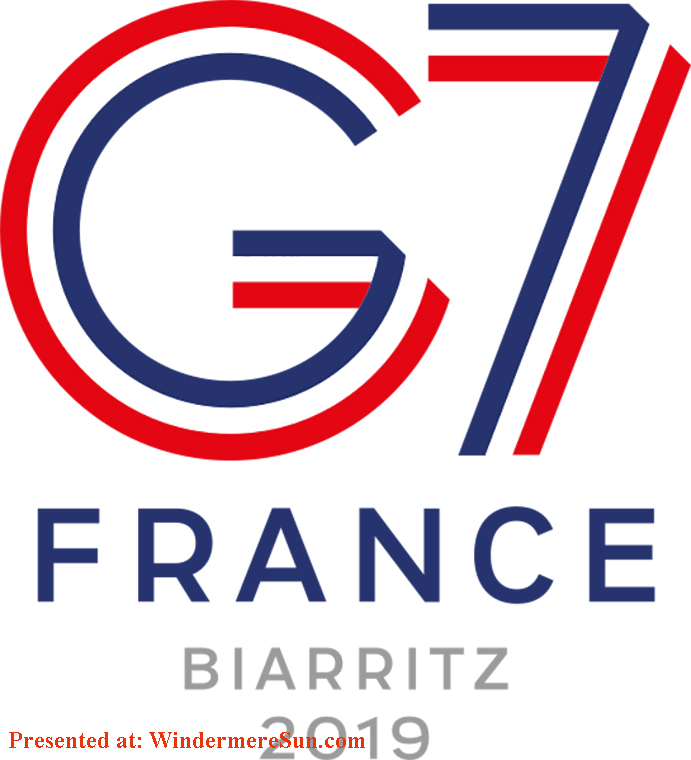 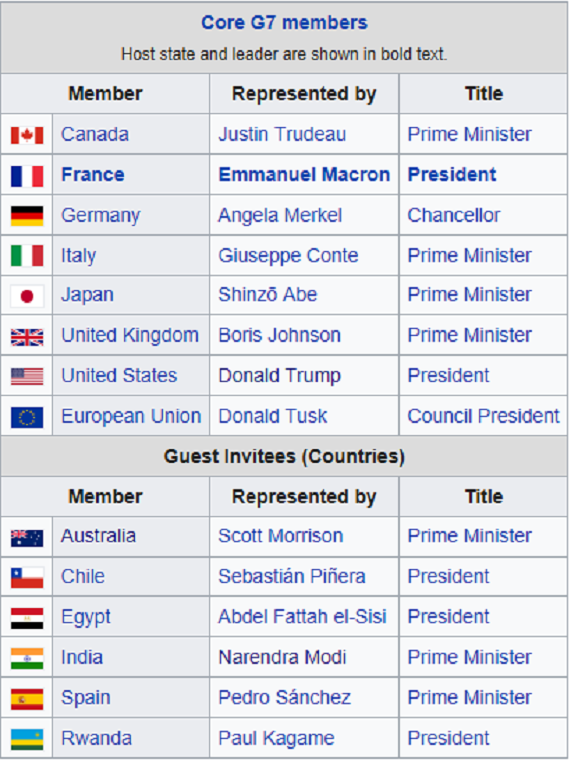 The Hôtel du Palais in Biarritz, France, was chosen as the host of the 45th G7 summit this year, from August 24-26, 2019.  In March of 2014, the G7 declared that a meaningful discussion was currently not possible with Russia in the context of the G8. Since then, meetings have continued within the G7 process. Attendees of this year’s G7 summit includes the leaders of the seven G7 member states as well as representatives of the European Union. The President of the European Commission has been a permanently welcome participant at all meetings and decision-making since 1981, but is not attending due to surgery. The President of the European Council has been the EU’s co-representative since the 36th G8 summit hosted by Canada in June 2010.

Donald Trump is in France meeting with world leaders at the annual G7 summit. Underneath the smiles and handshakes are concerns about the teetering global economy, as well as the president’s escalating trade war with China. Ben Tracy reports, in the video “Global economy concerns loom over G7 summit“, below:

World leaders began talks at the G7 summit in Biarritz, France, exposing sharp divisions on issues ranging from global trade to Brexit and the current fires in the Amazon rainforest, in the video “Tensions rise at 1st day of G7 summit“, below:

As the Washington Post puts it, one of France’s main objectives as host of this weekend’s Group of Seven summit is to minimize the chances that President Trump will blow it up. Chris Jansing is joined by former Admiral James Stavridis, former New Jersey Governor Christine Todd Whitman, and former Deputy Assistant Secretary of State Philippe Reines to break down what we can expect from this year’s G7, in the video “G7 Participants Brace For Potential Trump Drama, Velshi & Ruhle, MSNBC“, below:

In the video “Macron to host top Iranian diplomat in Paris before G7“, below:

Ahead of the G7 summit in France, world leaders are sounding off on the fires raging through the Amazon rainforest in Brazil. A spokesperson for French President Emmanuel Macron said Macron believes Brazil’s President Jair Bolsonaro lied to him in June when he reportedly promised to do more to combat climate change, in the video “French President Emmanuel Macron slams Brazil’s president over Amazon fires“, below:

Political pressure is growing on Brazilian President Jair Bolsonaro to take more urgent action to control the fires that are burning in the Amazon, in the video “Amazon fires: France and Ireland threaten to block Brazil trade“, below:

The “lungs of our planet” are on fire, Green MEP Magid Magid tells Newsnight, adding that “we need to wake up”, in the video “Amazon rainforest: ‘Our lungs are on fire’-BBC Newsnight“, below:

The United Nations is calling for the protection of the Amazon amid fears that thousands of fires raging across Brazil and some parts of Bolivia are rapidly destroying the world’s largest rainforest and paving the way for a climate catastrophe. The fires have spread a vast plume of smoke across South America and the Atlantic Ocean that’s visible from space. They’re unprecedented in recorded history, and environmentalists say most of the fires were deliberately set by illegal miners and cattle ranchers. Indigenous people in Brazil have accused far-right President Jair Bolsonaro of encouraging the destruction. Bolsonaro has worked to deregulate and open up the Amazon for agribusiness, logging and mining since he came into office in January. We speak with Andrew Miller, advocacy director at Amazon Watch, in the video “Our House is On Fire”: Brazil Faces Global Outrage as Massive Fires Spread in Amazon Rainforest“, below:

As for the topics of discussion at G-7 summit 2019, please refer to the excerpt from wikipedia, in italics, below:

On August 23, President Emmanuel Macron urged the G7 to lead the summit discussions with the 2019 Amazon wildfires, which he described as an “international crisis”. He said, “Our house is burning. Literally.”, adding that the Amazon rainforest produces “20% of the world’s oxygen.”[5] U.S. President Donald Trump offered to take the position of the Brazilian government to the meeting, and said that the U.S. government will not agree to discuss the issue without Brazil’s presence. The United Kingdom, Italy, Japan, Spain and Chile also support Brazil.[6]

More than 13000 policemen are required for the security[7] · [8]. The french government wish to avoid anti-globalization movements.

Dozen of little french and basque organization[10] join to organize a ‘Contre G7’ summit (type forum social [fr]) and a mutual web site[11], the same days as the G7, in the south of french Basque country. Dozen of meetings-debates are planed[12].