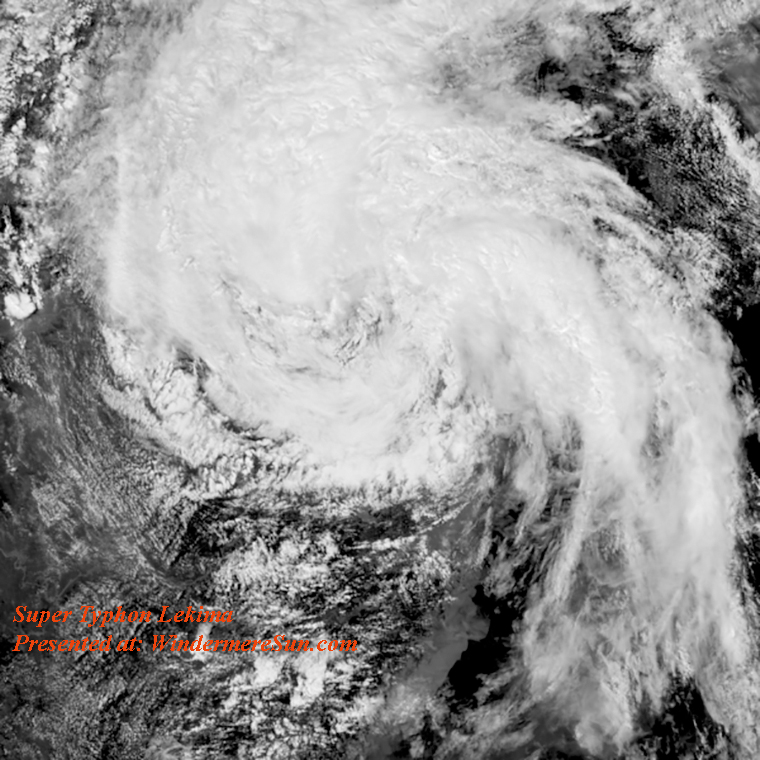 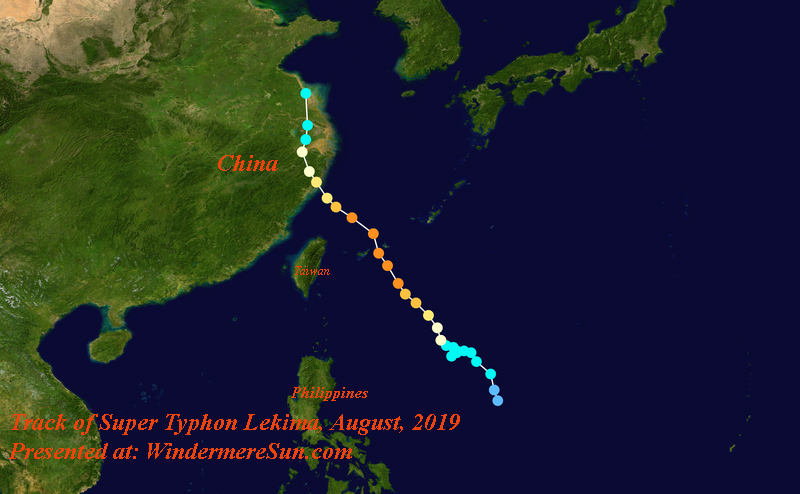 Information about Typhoon Lekima, from wikipedia, in italics, below:

Typhoon Lekima, known in the Philippines as Typhoon Hanna, is a currently active tropical cyclone that heavily damaged the Ryukyu Islands, eastern China and Taiwan. The system originated from a tropical wave that formed in the open Western Pacific ocean on July 31. It peaked as a high-end category 4-equivalent super typhoon on August 8. It is currently a tropical storm. It has already caused more than 50 deaths. Lekima is tied with Typhoon Wutip as the most intense tropical cyclone worldwide in 2019.

Three boats sank in Guimaras Strait; 31 people died and three were left missing.[2] A total of 55 passengers were rescued from the ships.PAGASA also issued Tropical Cyclone Warning #1.[2] The squalls caused flooding in multiple cities of the Philippines, mainly Bulacan. Flooding in several areas affected buildings in the area. In Taiwan some damage occurred to several buildings in Taipei. About 10,000 houses lost power. In China the Yongan River flooded into multiple cities damaging many structures. The flooding caused 22 deaths in Zhejiang Province. A heavy amount of rainfall caused a landslide that killed more people. Roof damage occurred at multiple buildings. The shingles went into the floodwaters just below the buildings. A barrier lake collapsed causing a large amount of floodwaters in Eastern China. The city of Wenling also experienced damage.

On August 2, JMA monitored a monsoon low which developed into a tropical depression. It developed in the Philippine Sea west of Philippines. The system began strengthening while moving towards the Philippines and strengthened into a tropical storm. The system began churning while moving away from the Philippines.[1][2] The PAGASA named it Hanna while it moved closer to the country, the JMA gave it the international name Lekima. It moved over a loop current north of Luzon and began rapidly intensifying and became a category 3 typhoon on August 7, west of Taiwan. Continuing to intensify rapidly it became a large super typhoon approaching the Ryukyu Islands. The storm began an eyewall replacement cycle by the following moment.[3]

On August 8 Lekima brushed the islands of Ishigaki and Miyako-jima with the eye passing in between both the islands with an unknown amount of damage being caused. Not long after the storm started moving towards Taiwan at an intense speed. Still at a category 4 strength it hit Taiwan with minor damage occurring and a few injuries. As it moved it began weakening and went through another eyewall replacement cycle. Finally Lekima made landfall in East China and weakened down to a severe tropical storm.[3]

For the latest official information, see:

As the Super Typhoon Lekima is making its way through eastern China, the Chinese authorities announced red alerts. Six inches of rain fell within just a few hours, resulting in wide spread flooding. Natural dams collapsed causing landslides. Over a million Chinese people had to flee their homes. Official reports indicated that: 200 houses in 6 cities in Zhejiang Province collapsed; more than 160,000 acres of farmland destroyed; and thousands of flights were canceled in the region. The slow moving typhoon will take few more days to pass, brining more flooding and destructions.

Cars were stranded in flood water after a river burst its banks during heavy rain from Typhoon Lekima this afternoon (09/08). The vehicles were parked next to the Marikina river in Manila, the Philippines when monsoon rains caused the water to overflow. Onlooker Kris Nunan said frantic security guards tried inform the owners but they were not able to find them. They are seen in the video tying ropes around the cars to stop them from being washed away, in the video “Parked Cars Flooded By Typhoon Lekima In The Philippines“, below:

Taiwan has issued a land warning for Typhoon Lekima, which is rapidly growing in strength as it approaches the island and could become a super typhoon. The weather bureau has advised residents in coastal cities like Keelung, Hualien and Yilan to brace for strong winds and heavy rain. Residents also had to cope with twin earthquakes that have left at least one person dead. The first quake that hit in the morning of Aug 8 measured 6 in magnitude, while the second came in at 4.6, in the video “Taiwan braces for Typhoon Lekima after being hit by twin earthquakes“, below:

At 5:30 am on Aug. 8, 2019, a 6.0 earthquake hit off the Taiwan coast under a stratavolcano beneath Turtle Island (GuiShan Island). Interestingly that seemed to signal an underwater volcanic eruption at the same time Typhoon Lekima neared the island. Is it an Earth – Sun electrical connection? The Ionosphere Map shows nothing unusual but when three typhoons form over the western Pacific and earthquakes are popping off all over the place at he the same time perhaps we should look to the electromagnetic coupling between the Sun and Earth for causation. Check out the Disaster Prediction App, in the video “Underwater Volcano Eruption & Typhoon Lekima Same Day Taiwan  (867)“, below:

At least 18 people have been killed and 14 were missing in eastern China in a landslide triggered by a large typhoon, which caused widespread transport disruptions and the evacuation of more than 1 million people. Typhoon Lekima made landfall early on Saturday in the eastern province of Zhejiang with maximum winds of 116mph (187km/h), in the video “Typhoon Lekima triggers landslides in eastern China“, below:

Millions of people have been forced to flee their homes in China where a super typhoon has wreaked havoc, in the video “At least 18 people killed in Typhoon Lekima, China“, below: