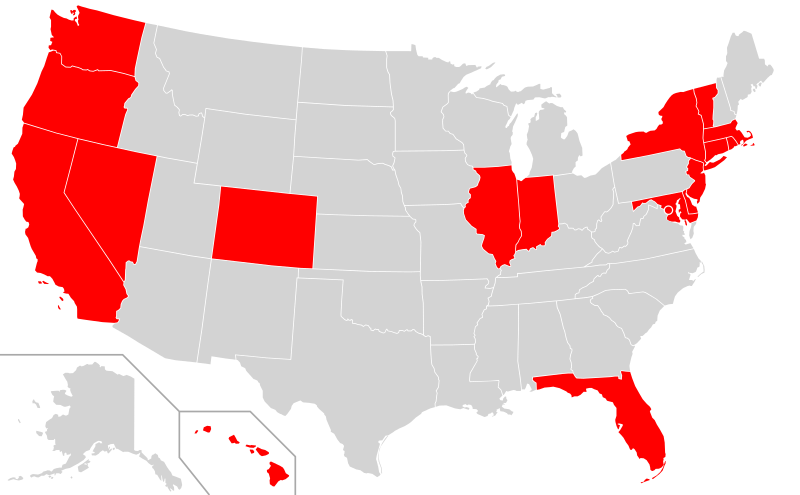 This should not be just a week of mourning and prayers, this needs to be a week and year of actions for gun control, period!

Today, I’ve received message from some one trying to convince me to contact my representative about universal background checks and red flag law. Even though I am in favor of universal background checks and banning of assault weapons, there is really no need for me to contact my representative about red flag law because Florida is already one of the 17 states with Red flag Law.

In light of recent mass shootings, I do implore you all to speak out and support: Universal Background Checks and Federal Assault Weapons Ban by contacting your/our representatives and senators.

Proposals for Universal Background Checks would require almost all firearms transactions in the United States to be recorded and go through the National Instant Criminal Background Check System (NICS), closing what is sometimes called the private sale exemption.

The 10-year Federal Assault Weapons Ban (a subsection of the Violent Crime Control and Law Enforcement Act of 1994) was passed by the U.S. Congress in September 13, 1994 and signed into law by President Bill Clinton on the same day. It expired on September 13, 2004. It is quite possible that the expiration of this federal law had contributed to the rising trend of mass shootings in USA in recent decades. We need to bring back the Federal Assault Weapons Ban.

The specific provisions of Red-Fag Laws differ from state-to-state, on issues such as who may petition for a risk protection order. For example, in Indiana, only law enforcement may petition for an order. In contrast, in Oregon, any person living with the person of concern may file a petition. The California Legislature passed a measure in 2016 to allow high school and college employees, co-workers and mental health professionals to file such petitions, but this legislation was vetoed by Governor Jerry Brown.

To better understand Red flag law, please refer to the excerpt from wikipedia, in italics, below:

In the United States, a red flag law is a gun violence prevention law that permits police or family members to petition a state court to order the temporary removal of firearms from a person who may present a danger to others or themselves.[1] A judge makes the determination to issue the order based on statements and actions made by the gun owner in question.[2] Refusal to comply with the order is punishable as a criminal offense.[3][4] After a set time, the guns are returned to the person from whom they were seized unless another court hearing extends the period of confiscation.[5][6]

Such orders are known by various names, including “Extreme Risk Protection Orders” (ERPO) (in Oregon, Washington, Maryland, and Vermont); “Risk Protection Orders” (in Florida); “Gun Violence Restraining Orders” (in California); “risk warrants” (in Connecticut); and “Proceedings for the Seizure and Retention of a Firearm” (in Indiana).[7] As of August 2019, 17 states and the District of Columbia have passed some form of red-flag law. The specifics of the laws, and the degree to which they are enforced, vary from state to state.[8]

In 1999, Connecticut was the first to enact a red flag law,[9] following a rampage shooting at the Connecticut Lottery.[10] It was followed by Indiana (2005), California (2014), Washington (2016), and Oregon (2017).[9] California was the first state to pass a red flag law allowing family members to petition courts to take weapons from persons deemed a threat, after Elliot Rodger committed a mass shooting in Isla Vista, California; the California law also permits law enforcement officials to petition for an order for the removal of guns from an individual for up to twelve months.[10]

Before 2018, five states had some version of red flag laws.[11] After the Stoneman Douglas High School shooting in Parkland, Florida, in 2018, that number more than doubled, as more states enacted such laws:[12][13] Florida,[14] Vermont,[15] Maryland,[16] Rhode Island,[17] New Jersey,[18] Delaware,[19] Massachusetts,[20] Illinois,[21] and the District of Columbia.[22] In 2019, New York enacted a red-flag law as part of a broader package of gun-control legislation that overwhelmingly passed the state legislature.[23][24] In addition to allowing police and family members to petition for entry of an extreme risk protection order,[23][24] the law also allows teachers and school administrations to file such petitions, making New York the first state to include such a provision.[25]Three other states also enacted red-flag laws in 2019: Colorado,[26] Nevada,[27] and Hawaii.[28][29]

Other state legislatures considered similar legislation.[30][6][31][32] In 2019, legislatures in Ohio, Pennsylvania, Michigan and North Carolina are considering such legislation.[8] Virginia General Assembly voted down red flag legislation in its January 2019 session, and then after being convened for a special session after the Virginia Beach shooting to consider gun control legislation, opted to refer the legislation to the State Crime Commission for study.[33]

A red-flag bill previously died in the Arizona Legislature, but in 2019, Governor Doug Ducey renewed pressure on legislative Republicans to pass the law in the wake of the shootings in El Paso, Texas and Dayton, Ohio.[34] A red-flag bill has been introduced in the Tennessee Legislature, but in 2019 the Republican-controlled has legislature declined to take up the bill, and Governor Bill Lee has not committed to support it.[35]