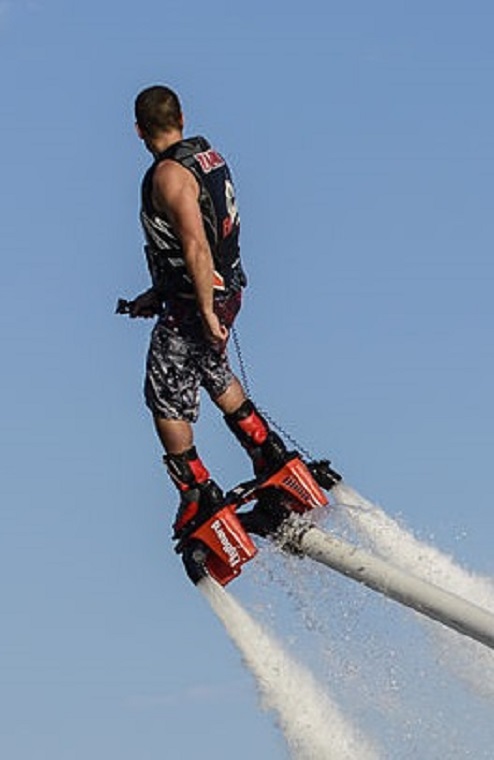 During this week of various reports, I feel the need to inject something far more uplifting into our newsfeed. So, I am bringing you an event that happened during the first week of August, 2019 : French inventor Franky Zapata crossed the English Channel on his flying contraption. He used a hover-board to cover 35 kilometers in 22 minutes. He set off from France’s Sangatte and landed in United Kingdom’s St. Margaret’s Bay. Commenting on his feat, Zapata said he was feeling happy and it was an ‘amazing’ moment of his life. He also revealed how the journey was physically taxing as his body had to endure wind resistance while travelling at speeds above 150 kilometers per hour. The inventor’s wife broke down when news of his landing reached her, in the video “Stunning visuals: French inventor uses hover-board to cross English Channel“, below:

Franky Zapata is a French personal watercraft pilot and inventor of the  Flyboard and Flyboard Air, founder of Zapata Racing. Franky Zapata has been focused on the development and manufacture of personal flyers for land and aquatic applications. On August 4, 2019, he crossed the English Channel in 22 minutes with a refueling stop at midpoint, on a Flyboard Air. His 35-kilometer (22 mi) journey was completed with an escort from several French helicopters and warships, and aided by a backpack fuel reservoir.

For more about Franky Zapata, please refer to the excerpt from Wikipedia, in italics, below:

Franky started using a Jet Ski at the age of 16. He has won the RUN F1 World Championship several times.[citation needed] After many years of making personal watercraft (PWC), he invented the Flyboard. [4]

He completed an apprenticeship as a mechanic. After gaining experience in jet skiing through competitions, he and his father Claude, founded Zapata Racing in 1998 as a high-performance PWC competition team.[5] He shaped shells, steering, arm and saddle-VNM[clarification needed] and tuned[clarification needed] machines for jet ski races. He has won in PWC competition several European championships and two world champion titles. His Zapata Racing Team develops PWC related products.

Zapata started with a budget of 20,000 euros to develop the Flyboard. After several prototypes, he finally managed to stabilize the flyboard by means of underfoot and a hand stabilization in the air. After patenting the invention, he presented the Flyboard for the first time during the World Cup in China. The first flights were recorded and posted on YouTube and received 2.5 million views in just 15 days.

In 2016, Zapata sold Zapata Racing (ZR) to U.S. defense contractor Implant Sciences. In 2017, he provided the U.S. Army with demonstrations of the Flyboard Air (jet-powered hoverboard). A July 2019 news report provided no indication of any serious interest as of that time for the flyboard technology.[7]

But here, at Windermere Sun in USA, we believe that there would be wide range of applications of Mr. Zapata’s Flyboard.  Mr. Zapata, you simply need to be patient and find the right audience.