Pet Hen/I have no methods;all I do is accept people as they are 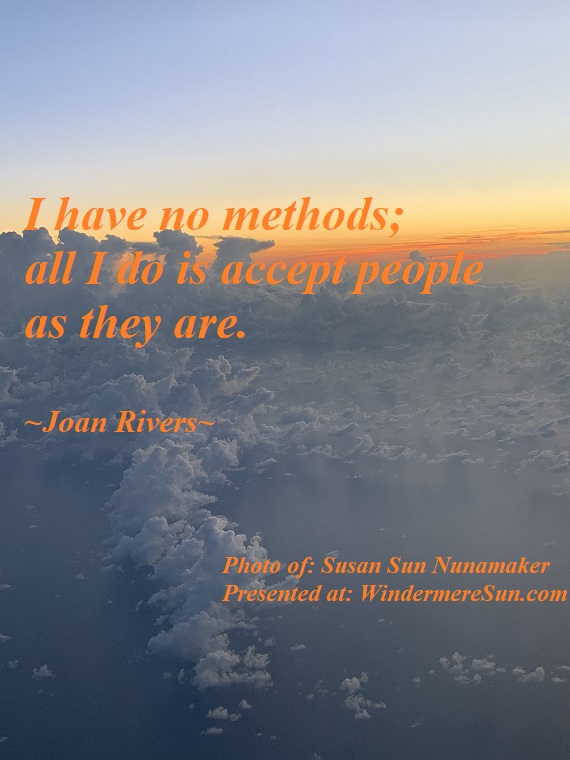 Quote of 8/3/2019, “I have no methods; all I do is accept people as they are.” (Quote of: Joan Rivers, Photo of: Susan Sun Nunamaker, Presented at: WindermereSun.com) 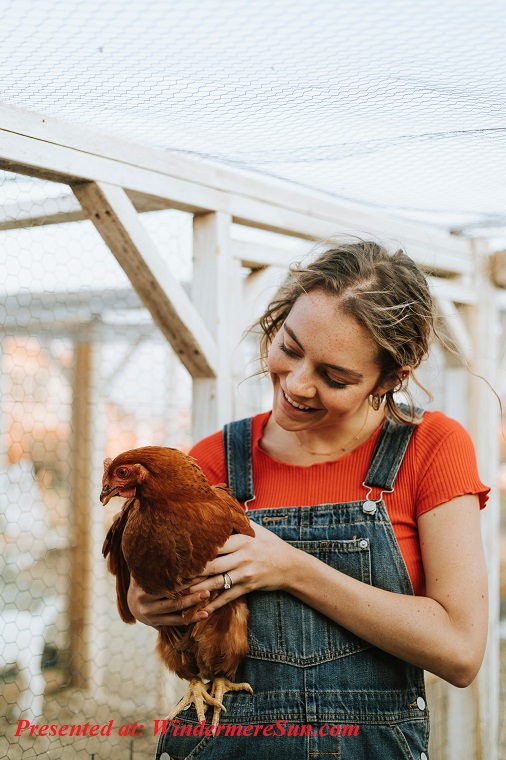 Yes, I don know some people who would keep hens as their pets.

Quote of 8/3/2019, “I have no methods; all I do is accept people as they are.” (Quote of: Joan Rivers, Photo of: Susan Sun Nunamaker, Presented at: WindermereSun.com)

Joan Rivers once said, “I have no methods; all I do is accept people as they are. I concur, Joan Rivers!

So, you want to find out more about Joan Rivers? Please feel free to refer to the excerpt from Wikipedia, in italics, below:

Rivers rose to prominence in 1965 as a guest on The Tonight Show. Hosted by her mentor, Johnny Carson, the show established Rivers’ comedic style. In 1986, with her own rival program, The Late Show with Joan Rivers, Rivers became the first woman to host a late night network television talk show. She subsequently hosted The Joan Rivers Show (1989–1993), winning a Daytime Emmy for Outstanding Talk Show Host. From the mid-1990s, she became known for her comedic red carpet awards show celebrity interviews,[3][4] and in 2009, she was the Celebrity Apprentice Winner. Rivers co-hosted the E! celebrity fashion show Fashion Police from 2010 to 2014 and starred in the reality series Joan & Melissa: Joan Knows Best? (2011–2014) with daughter Melissa Rivers. She was the subject of the documentary Joan Rivers: A Piece of Work (2010).

In addition to marketing a line of jewelry and apparel on the QVC shopping channel, Rivers authored 12 best-selling books and three LP comedy albums under her own name: Mr. Phyllis And Other Funny Stories (Warner Bros 1965), The Next To Last Joan Rivers Album (Buddah 1969), and What Becomes A Semi-Legend Most? (Geffen 1983). She was nominated in 1984 for a Grammy Award for her album What Becomes a Semi-Legend Most?; and was nominated in 1994 for the Tony Award for Best Actress in a Play for her performance of the title role in Sally Marr … and Her Escorts. In 2015, Rivers posthumously received a Grammy Award for Best Spoken Word Album for her book, Diary of a Mad Diva.[5]

In 1968, The New York Times television critic Jack Gould called Rivers “quite possibly the most intuitively funny woman alive”.[6][7] In 2017, Rolling Stone magazine ranked her sixth on its list of the 50 best stand-up comics of all time,[8] and in October the same year, she was inducted into the Television Academy Hall of Fame.

Photographed, Gathered, written, and posted by Windermere Sun-Susan Sun Nunamaker More about the community at www.WindermereSun.com