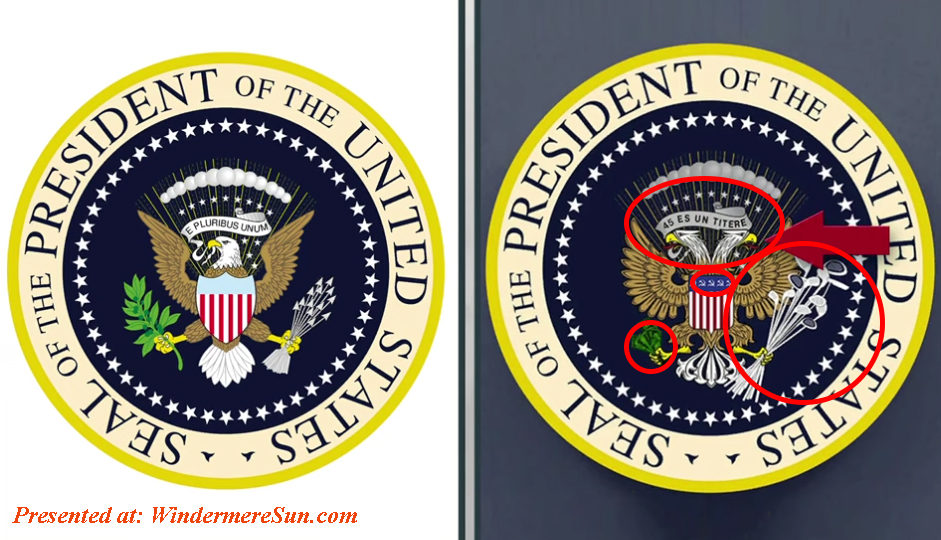 Seal of President of the United States (L) & its modified version (R) (Presented at: WindermereSun.com)

The night before Robert S. Mueller III’s testimony, on July 23, 2019, President Donald Trump spoke at a public event to a right wing youth group,  at the Teen Student Action Summit hosted by the conservative group Turning Point USA. During the event, Trump stood smiling in front of a fake presidential seal (from a website, one-term-donnie.myshopify.com) altered to mock him as a Russian puppet. Washington Post’s keen eyes spotted several interesting deviations that distinguished the fake seal (R, below) from the real seal (L, below) of the President of the United States:

Seal of President of the United States (L) & its altered version (R) (Presented at: WindermereSun.com)

The image projected behind President Trump at Turning Point USA’s conservative student summit July 23 had some key differences from the official presidential seal, in the video “This presidential seal does not look like the others“, below:

The graphic designer, Charles Leazott, created the seal in late 2016 as a way to vent and entertain his friends and family. The altered seal by Leazott became popular that Leazott launched one-term-donnie.myshopify.com for people to buy goods featuring the image. On Thursday, July 25, 2019, Leazott’s seal made it into the front page of Reddit and gathered 15,000 votes and 800 comments. Leazott did not expect to see his creation of the fake presidential seal to show up on a screen with President Donald Trump smiling in front of it.

Rachel Maddow shares the ridiculousness of Donald Trump’s appearance at an event for teenage supporters in which he stood in front of a fake presidential seal altered to mock him as a Russian puppet, in the video “President Donald Trump Mocked ON Stage By Errant Satire Presidential Seal, Rachel Maddow, MSNBC“, below:

During a student activist conference, the president this week spoke in front of an altered presidential seal which featured a two-headed eagle clutching golf clubs. The WH says it did not know the seal would be displayed, in the video “A Well-Deserved Tribute’?Donald Trump In Front Of Fake Seal, Morning Joe, MSNBC“, below:

President Trump gave a speech  in front of a fake presidential seal displayed on a video display wall. The bald eagle was depicted clutching golf clubs, as opposed to arrows. The White House says didn’t know the altered seal would be displayed. A member of the video team at the organization Trump was speaking at has been fired for displaying the seal, in the video “President Donald Trump Gives Speech In Front Of Fake Presidential Seal, NBC News“, below:

In the video “Trump Stands Before Altered Presidential Seal, The View“, below:

According to CNN report, the audiovisual aide allegedly responsible for having placed the altered seal behind Trump has since been fired.