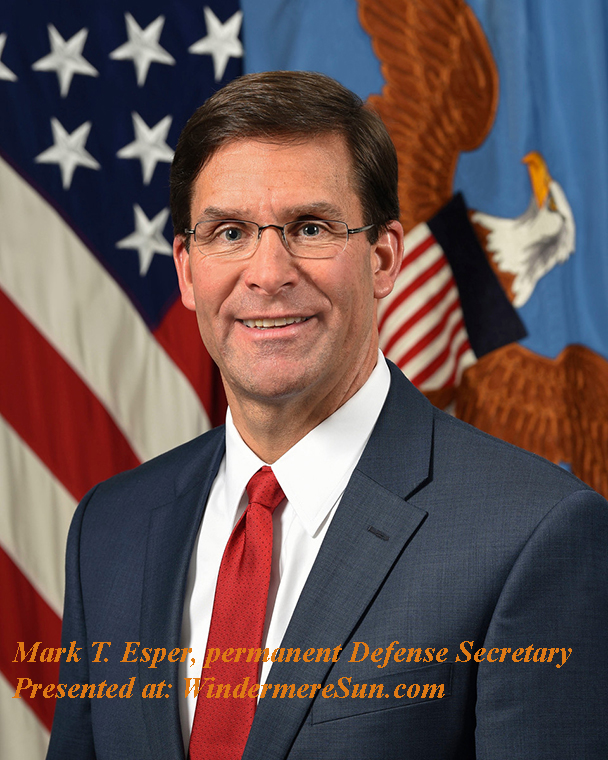 Dr. Mark Esper, the new permanent Secretary of Defense, poses for his official portrait in the Army portrait studio at the Pentagon in Arlington, Va., June 20, 2019. (Attribution: U.S. Army photo by Monica King, Presented at: WindermereSun.com)

On Tuesday, July 23, 2019, the Senate voted overwhelmingly (90 to 8 vote) to confirm Mark T. Esper as the permanent Defense Secretary, ending  months long vacancy since Jim Mattis resigned last year over policy disagreements with President Trump. Esper had spent most of his career in the military and in government. He was sworn in on Tuesday at the White House by Supreme Court Justice Samuel A. Alito Jr.

In the video “Senate confirms Mark Esper as Secretary of Defense in a 90-8 vote“, below:

Mark Esper was sworn in as Secretary of Defense Tuesday, July 23, ending the longest period that the Pentagon has been without a permanent top official, in the video “Esper Sworn-In as Trump’s Defense Secretary“, below:

The former army secretary was tapped for the role by President Donald Trump last month, in the video “Senate confirms Mark Esper as defense secretary“, below:

As Esper thanked the president for this position, he said, “It is an honor of a lifetime to be appointed secretary of defense and to lead the greatest military in history. And I will do so with that same energy and commitment to honor, duty and country that I have for nearly four decades, since my early days at West Point.”