Time For UK & Iranian Leaderships To Come To The Table 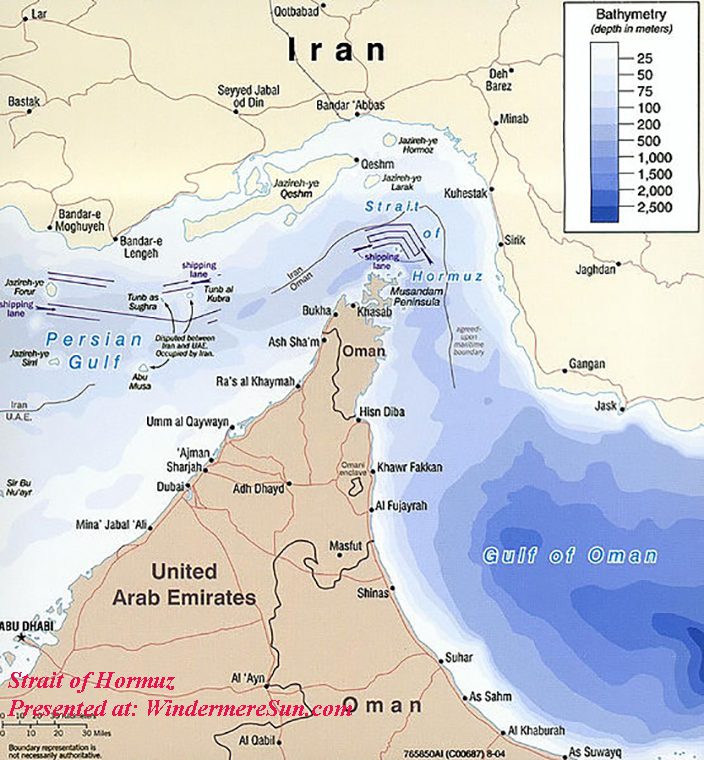 Strait of Hormuz (Presented at: WindermereSun.com)

Tensions in the Persian Gulf have escalated on Friday, July 19, 2019, with report of Iran stopping two oil tankers, with one being British-flagged and the other a Liberian-flagged ship operated by a British concern. One vessel was seized while the other was temporarily stopped and sent on its way, according to a U.S. official and the tankers’ operators. These two vessels were stopped in the Strait of Hormuz. Tehran confirmed the first seizure but denied the second. Iranian officials also denied that the U.S. warship Boxer destroyed an Iranian drone on Thursday, July 18, 2019.

Iran’s Revolutionary Guard Corps (IRGC) said its forces have captured a British oil tanker in the Strait of Hormuz for allegedly violating international laws, amid rising tensions in the Gulf. The Stena Impero tanker “was confiscated by the Revolutionary Guards at the request of Hormozgan Ports and Maritime Organisation when passing through the Strait of Hormuz, for failing to respect international maritime rules”, the IRGC’s official website Sepahnews announced. The tanker “was led to the shore and handed over to the organisation to go through the legal procedure and required investigations”, it said. The vessel was seized by “small crafts and a helicopter” at 7:30pm local time (15:00 GMT), the owner of the vessel, Stena Bulk, and Northern Marine Management said, adding that they are “presently unable to contact the vessel”. Tanker tracking service Marine Traffic showed that the UK-flagged, Swedish-owned Stena Impero last signalled its location near the Island of Larak in the highly sensitive waterway at 9pm local time (16:30 GMT). There are 23 crew members on board, the company’s statement added. “We are urgently seeking further information and assessing the situation following reports of an incident in the Gulf,” a spokesperson for Britain’s Ministry of Defence said, in the video “Iran seizes British oil tanker in Strait of Hormuz“, below:

Tehran had pledged retaliation after Great Britain seized one of its ships last month. It’s the latest in the already-volatile Persian Gulf, where the U.S. downed an Iranian drone on Thursday, July 18, 2019, in the video “British-Operated Oil Tanker Seized By Iranian Forces, NBC Nightly News“, below:

CNN’s Clarissa Ward reports that UK Foreign Secretary Jeremy Hunt warns there will be “serious consequences” if Iran does not release a UK-flagged oil tanker it seized in the Strait of Hormuz, in the video “UK warns Iran of potential ‘serious consequences’ over oil tanker“, below:

Iranian state media have released footage of the seized oil tanker Stena Impero detained in the strait of Hormuz on Friday, marking a dramatic escalation in the worsening standoff in the Gulf. Iran’s Revolutionary Guards claimed to have taken the British-flagged ship into port with its 23-strong crew, and Iranian officials claimed it had infringed maritime regulations Iran’s top diplomat in UK summoned over seizure of Stena Impero tanker, in the video “Iran releases new footage of seized British-flagged oil tanker“, below:

Quite possibly, this current escalated tension in Persian Gulf may have resulted from an event that took place during first week of July, 2019: A supertanker suspected of carrying crude oil to Syria in violation of EU sanctions was detained in Gibraltar on Thursday, the territory’s Chief Minister Fabian Picardo said, in the video “Royal Marines detain tanker in Gibraltar suspected of carrying Iranian oil to Syria“, below:

It is time for the sane leaderships from two sides, UK and Iran, to come to the table and seriously discuss trading tankers and resolve this issue swiftly.