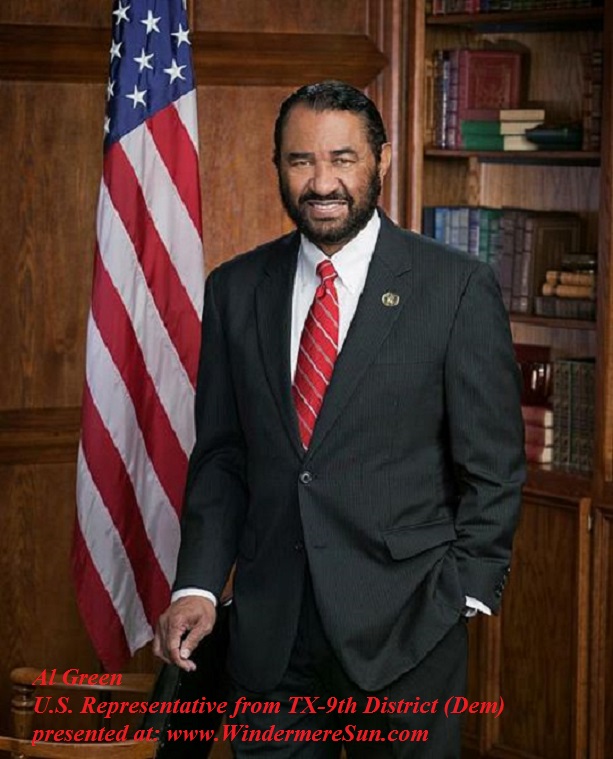 On Tuesday night, July 16, 2019, the Democratic Congressman Al Green of Texas, read the following ( in italics) on the House floor, planning to bring articles of impeachment against President Donald Trump, below:

In maintenance and support of its impeachment against him for high misdemeanors committed as president, constituting harm to American society, to the manifest injury of the people of the United States. Article 1, the House of Representatives on July 16, 2019 strongly condemned President Donald Trump’s racist comments that have legitimatized and increased fear and hatred of new Americans and people of color by saying that our fellow Americans who are immigrants and those who may look to the president like immigrants, should go back to other countries, by referring to immigrants and asylum seekers as invaders. And by saying that members of Congress who are immigrants or those of our colleagues who are wrongly assumed to be immigrants, do not belong in Congress or in the United States of America.

Therefore, Donald John Trump, by causing such harm to the society of the United States, is unfit to be president and warrants impeachment, trial and removal from office.

The House of Representatives voted to formally condemn President Trump’s ‘racist’ attacks against four minority Congresswomen. Only four Republicans went on the record rebuking Trump for having “legitimized fear and hatred of new Americans and people of color.”  The vote was immediately followed by Democratic Rep. Al Green introducing articles of impeachment against Trump, citing his inability to ‘defend the American ideal of all persons being equal.’ in the video “Historic: Watch The Moment The House Rebuked Trump’s Racism, The Beat With Ari Melber, MSNBC“, below:

To better understand the background situation: Prior to Congressman Al Green’s speech on the House floor, Tuesday on the NewsHour, congressional Republicans and Democrats continue to disagree over President Trump’s controversial tweets. Plus: Why federal prosecutors aren’t bringing charges in the Eric Garner case, the struggle of Venezuelan refugees in Brazil, economic and political progress in Colombia, the newest novel from Colson Whitehead and fallout from the Puerto Rican governor’s leaked texts, in the video “PBS NewsHour full episode July 16, 2019“, below:

On Wednesday, July 17, 2019, for the first time since Democrats took control of the House a bill to impeach President Trump reached the house floor. Speaker Pelosi leading Democrats to squash the effort with less than half the caucus voting to even move towards a bill launching an impeachment probe of President Trump. Rep. Al Green warns ‘blood of somebody on our hands” if Trump not impeached now. In the video “‘Blood Of Somebody On Our Hands’: Trump Impeachment Hits House, The Beat With Ari Melber, MSNBC“, below: